What is a caliby cat?

A caliby cat is the coat coloration of a cat and is not a stand-alone breed.  Caliby cats have the coloration of a calico mixed with a tabby—typically areas of orange (red) and brown tabby with white. The name is a mix of calico + tabby = caliby.

Most cat lovers are familiar with tortoiseshell and calico cats:

Cats displaying red and brown or cream and grey tabby patterns without the presence of white are known as patched tabbies.

Like a caliby cat, a calico cat is not a breed but a description of coat color. Calico cats are short- or long-haired domestic cats with a tri-color coat. They’re commonly 25 percent to 75 percent white with orange and black patches. White is the most common color making up the coat of calico cats, but a calico cat doesn’t need to be mostly white to qualify as a calico-colored cat.

Most calico cats are female, but male calicos can exist. This is because to show the calico coloration, the genes must be present on two X chromosomes. A male can only be calico colored if he has an extra X chromosome.

Tabby is a cat of any breed with a coat pattern of stripes, swirls, dots, and rings. There are four possible tabby cat coat patterns: mackerel, spotted, classic, and ticked. The pattern is determined by a gene called the agouti gene that determines the pigment of each hair. The background hair of any tabby pattern is light with dark bands intermingling with dark lines, spots, or swirls on top. There are several colors of tabby cats including brown, silver (grey), and orange.

A caliby with a classic tabby pattern is recognized by its bold, swirling pattern against a light background color. Classic tabby cats have an “m” on their forehead, a concentric swirl on each side of the body called a “bullseye”, and a light area between the shoulders called a “butterfly”. They might have stripes around the neck and down their legs. Due to the addition of white coloring in caliby cats, some of these features may not be distinct. 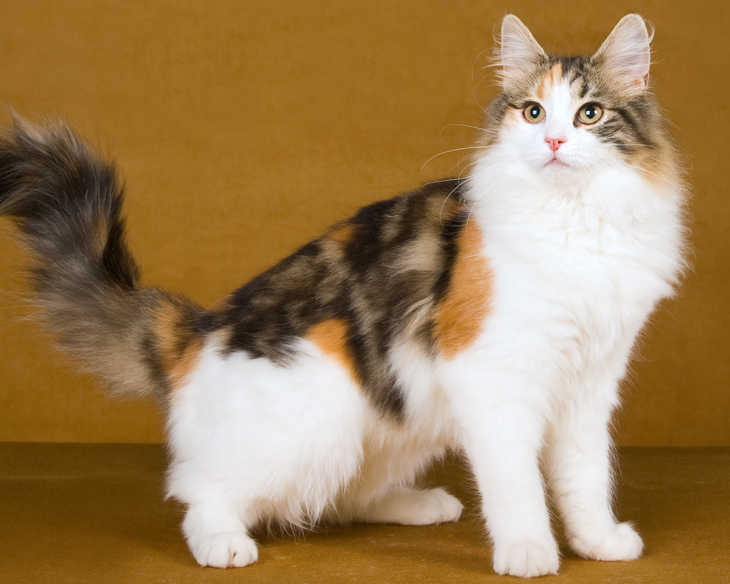 Cats with a spotted tabby pattern resemble their wild relatives, the leopard. The spotted tabby coloration is caused by a modifier gene that breaks up the striping and creates spots. Look close and you’ll typically see three colors making up each spot: a dark ring around a light spot and a lighter base coat.

What breed is a caliby cat?

The caliby is a coat color or pattern, not a breed of cat. The caliby coat color can be found in mixed breed cats and purebred cats. This includes the Devon Rex, Cornish Rex, Exotic Shorthair, Persian, Oriental shorthair, Manx, American Curl, American Wirehair, Munchkin, and Scottish Fold.

Almost all caliby cats are female. The red (orange) is located on the X chromosome, which makes it sex-linked. As the male (XY) only has one X chromosome, he will either be red and white, or non-red and white. The female (XX) has two chromosomes, so if she inherits one copy of the red gene, and one copy of non-red (black, brown or grey), she will display both colors at random. The addition of white is due to the white spotting gene which masks all other colours by preventing normal pigment-producing cell replication and migration to the skin during embryologic development

The incidence of male tortoiseshell, calico and other sex-linked colors is reported to be 1-3,000. The most common cause is Klinefelter syndrome, in which the male inherits two X chromosomes, so instead of being XY, he is XXY.

The caliby is a coat color or pattern and not a breed. So, cats with the caliby coloration will vary in personalities. Like all cats, caliby cats will have inherent traits passed on through their breed and be shaped by their mother, feline socialization, interactions with their human companions, and other life events.

Differences between caliby and tortie cats

The tortoiseshell cat has patches of black and orange, brown and orange, or grey and cream without the appearance of white. A caliby cat has tabby patterns and the presence of white in addition to red and brown or cream and grey coloration.

Are caliby cats known for having health issues?

However, for a male cat to have the caliby coat coloration, he must have two X chromosomes instead of one, giving him an XXY genetic makeup. This isn’t inherited and is instead a random condition that develops during cell division. This is called Klinefelter’s syndrome and is associated with infertility, hypogonadism (reduced or lack of sex hormones), reduced life expectancy, increased body fat, and cognitive impairments.

What is a diluted caliby cat?

Can a caliby cat be male?

Yes, caliby cats can be male. Male caliby cats are less common than female caliby cats. This is due to the coloration being sex-linked. For a male to have the caliby coat, he must have an XXY genetic makeup, known as Klinefelter’s syndrome.

What is a calico tabby called?

A calico tabby cat is called a caliby. It is a coat coloration, not a stand-alone breed.

What is a tricolor cat?

A tricolor cat is a cat with a sex-linked three-color coat. The appearance of three colors is present in females and more uncommonly, males. Tricolored cats are commonly known as calico, tortoiseshell, and caliby cats.

Can a male cat have 3 colors?

Yes, male cats can have tricolored coats. While uncommon, there are male calico, tortoiseshell, and caliby cats. Tri-coloration is a sex-linked gene, so males with three colors have an extra X chromosome.

What breed is Felix the cat?

Felix the cat is a domestic shorthair cat with black and white tuxedo coloring.