What is a classic tabby cat?

Despite popular belief, the tabby is not a breed of cat but instead describes the coat of a cat. Also known as blotched or marbled tabby, the classic tabby pattern consists of a light agouti (banded) ground colour with a melanistic overlay made up of lines, swirls, and whorls.

You’ll find the tabby coat in four patterns. All tabby patterns are made up of two components: the base colour of alternating light and dark bands on each hair and the overlying dark spots, swirls, or stripes.

Three genes are responsible for the unique coloration of the tabby. One modifier gene breaks up the mackerel pattern into spots and the other removes the spots, stripes, or swirls of the dark tabby pattern. Some residual stripes remain on the face and legs.

All tabby cats have an agouti base, and the mackerel, spotted and classic have the addition of dark spots, stripes or sworls.

Even non-tabby cats carry tabby genes, however, other colours or patterns may hide the tabby patterns. Sometimes it is possible to see faint ghost tabby markings on solid cats, especially kittens.

A 2012 study found that classic tabbies carry a mutated form of a gene called transmembrane aminopeptidase Q (Taqpep). With the help of a second gene called Endothelin 3 (Edn3), the coat colour and tabby pattern are determined.

The Taqpep gene establishes the coat pattern during fetal development. Endothelin 3 (Edn3), provides instructions for making a protein called endothelin 3 leading to the determination of the colour of the coat.

Endothelin 3 and endothelin receptor type B play a role in the development of two neural crest-derived cell types, melanocytes, and enteric neurons. Melanocytes are pigment-producing cells that give the skin, hair, and eyes their colour. Edn3 is a regulator of black (eumelanin) vs yellow (pheomelanin) pigment, and researchers think the expression of Taqpep is needed to establish a pattern of stripes in early development, which is carried out by Edn3 as the fur grows.

The domestic tabby feline isn’t the only cat to experience mutations of the Taqpep gene leading to unique coat patterns. In the wild, the king cheetah was thought to be a separate species from its feline counterparts. However, researchers found the unique coat is caused by the same genes that were responsible for the blotched pattern in tabbies—leading to the conclusion that both cheetahs are the one species.

It depends on where you live. The classic tabby is the most common tabby pattern in the United Kingdom, but mackerel tabby is more prevalent elsewhere. Despite this, classic tabbies are not rare. The American Shorthair is well known for its silver classic tabby coat pattern.

What breed is the classic tabby?

The tabby cat is a description of the coat pattern, not a breed of cat. The tabby coat pattern can be found in mixed-breed cats and purebred cats. This includes the Manx, American Bobtail, Bengal, American Curl, and others.

What is the difference between mackerel and classic tabby?

Mackerel tabbies have narrow stripes which run vertically down the sides of the body, these stripes may break up into bars or vertically aligned spots. A dark stripe runs along the spine, and thin bands circle the legs and tail.

Classic tabbies have thick bands of whorls running along each side of the body, a butterfly pattern when viewed from above. Most classic tabbies will have a circular bullseye on both sides of the body. Both the mackerel and classic tabby have the characteristic M on their forehead and tabby stripes on the face. 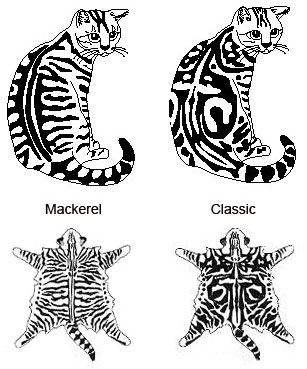 What colour is the classic tabby?

The most common classic tabby colour is brown or red (orange). Silver classic tabbies (grey with black stripes) are popular among purebred cats, particularly the American and British Shorthairs. Female cats can be black and red, brown and red or cream and blue, which is commonly referred to as patched tabby or torbie. The dilute gene causes the coat colour to wash out, which creates a blue, lilac or cream classic tabby.

Which breeds of cats can have the classic tabby pattern?

Because the classic tabby pattern is a description of coat colour, it can be found throughout many popular cat breeds. If you’re looking to add a striped, spotted, or swirled-coat cat to your clowder, look no further than these loveable tabby breeds:

Because classic tabby is a coat pattern and not a breed, each cat is different. Some purebred classic tabbies may share certain traits. The biggest factor which shapes a cat’s personality is its interaction with its mother, siblings, and humans in the critical first few weeks of life.

What does the “M” mean on a tabby cat?

The formation of the “M” pattern on the tabby forehead is one of the unique genetically-influenced patterns seen in tabby cats. While scientists continue to research and learn about the unique genetic make-up of the tabby, other humans have come up with their own explanations.

According to Fairfield Animal Hospital, the Islamic faith tells the story of the prophet Muhammed and his cat Muezza. As the story goes, Muezza saved Muhammed from the bite of a poisonous snake. In return, Muhammed patted Muezza on the forehead, lovingly marking the cat with the classic “M” we see on tabby cats today.

In the Christian religion, it’s said that a cat curls up with baby Jesus in the manger, warming the baby. Mary gently strokes the cat’s forehead in appreciation, giving the cat the classic “M”.

As for the Egyptians, they believed the eye shine of a cat’s eyes was due to their relationship with the moon. The “M” on a tabby’s forehead is another way cats expressed this relationship.

No, there is no evidence to suggest the classic tabby pattern is hypoallergenic. Because tabby describes the coat pattern and not a breed of cat, the amount a cat sheds may vary between breeds.

It depends on the breed. Purebred cats cost from $1000 plus, while random-bred cats (moggies) from a shelter typically cost between $100 – $300

How long do classic tabbies live?

Again, it’s impossible to say because it’s a coat pattern and not a breed. The average lifespan for an indoor cat is 12-15 years.

How big do tabby cats get?

Tabby cats include many breeds of popular cats. Breeds may be as small as the Munchkin cat and include large breeds like the Maine coon. The size of a tabby cat will depend on their breed.

When does the classic tabby cat stop growing?

Cats, including tabby cats, typically reach maturity around one year of age. This can vary between breeds of cats and individuals.

What are tabby cats named after?

The word tabby comes from silk made in a district of Baghdad called Al-‘Attābīya. The silk, with an irregular wavy pattern, became known as ‘attābī. The silk made its way to France and became known as tabis. In the early 1600s, English speakers began calling the uniquely patterned silk tabby. It wasn’t until the 1700s that linguists connect the use of tabby to describe the coat of a cat.

Does the classic tabby cat make a good pet?

Yes, tabby cats make great pets for first-time cat owners, families, and other cat lovers alike. Before adopting or purchasing a cat, research their breed for insight into their personality and ask about their early life experiences.