Any cat lover can attest to the elegance, flexibility and range of motion cats possess. From curling up in a tight ball when they’re cold to long upright stretches, twists in mid-air, and their incredible ability to almost always land on their feet.

Why are cats so flexible?

Cats are ambush predators, and their success lies with their stealth, agility and speed. Unlike dogs who can chase down their prey over a long distance, cats are sprinters. They lie in wait until the right opportunity and ambush with a quick burst of speed, this may be a pounce to trap a rodent, or a mid-air leap to catch a bird mid-flight. All of these traits which make the cat such an exceptional hunter requires the flexibility of movement to sprint, stretch, twist and in some cases, squeeze into narrow places and run at high speed. In fact, cats can run at 30 miles per hour (48 km per hour) over short distances.

Adult humans have 33 vertebrae during early development, which becomes 24 after the sacral and coccygeal regions fuse, cats have 30 (not including the caudal or tail bones). Sandwiched between each vertebra are pads of tough, fibrous cartilage called intervertebral discs.  The vertebrae are connected more loosely in cats than in other animals which increases their flexibility even more.

The cat’s vertebrae are held by muscles rather than ligaments, adding to the cat’s ability to elongate and contract their cat which helps the cat increase his or her stride length when running at speed. 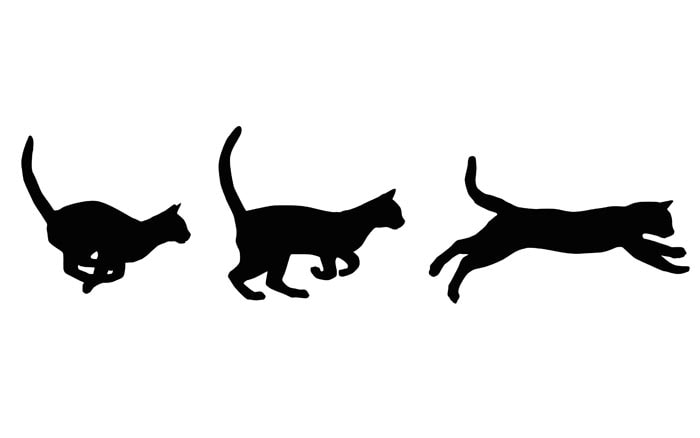 The long and flexible vertebrae along with the powerful hind legs make cats exceptional at jumping. The average cat can jump six times his or her height.

Unlike humans, the cat’s shoulder blades (scapula) are attached to the body by muscles and not bones, this gives them much greater flexibility to move and stretch out when running at speed.

The cat’s collarbone is a tiny bone that is located deep within the chest muscle and is not attached to any other bones. This makes the cat’s chest much narrower and deeper than other mammals, allowing the cat to squeeze into narrow places.

Loss of flexibility in cats

Flexibility often declines as a cat ages due to the onset of arthritis which is common in middle-aged to senior cats. Early intervention can help slow the progression of arthritis.

Spondylosis is a progressive disease of the cat’s spine characterised by the formation of bony spurs (osteophytes) on the edges of the vertebrae, which are the small bones that make up the backbone. This can put pressure on the spinal cord, causing pain and reduced mobility.

If you notice changes in mobility, such as reluctance to jump, grooming less, inactivity, schedule a visit with your veterinarian.