Garfield was an American comic strip created by Jim Davis in 1976. Over the next 40 years, the strip reached over 2000 newspapers and holds the Guinness World Record for being the world’s most widely syndicated comic strip.

The main character of the comic strip is none other than Garfield, a fat orange tabby cat. Garfield loves lasagna more than anything… and will do anything to get it!

With Garfield’s fame throughout America and the world, orange tabby cats have gained the reputation as fat and lazy. However, is it true? Does Garfield represent the true nature of every orange tabby cat?

What Kind of Cat is Garfield – The Most Well-Known Fat Orange Tabby Cat? 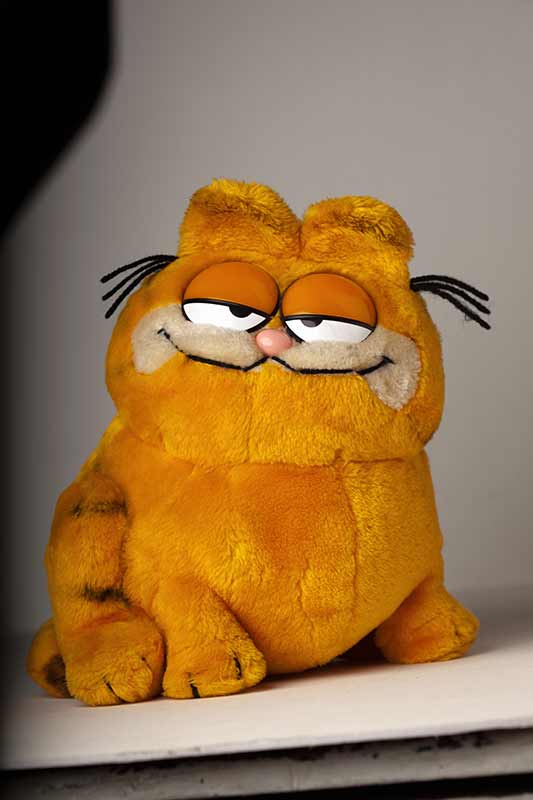 It would be hard to find someone who hasn’t heard or seen anything about Garfield. It’s one of the most popular comic strips in the world, having inspired multiple movies, TV shows, and video games. It’s a staple of American pop culture.

Jim Davis originally created a comic strip called “Gnorm Gnat” focusing on bugs. When he got the feedback that no one could relate to bugs, he based it on a cat because there were already too many dog-centric comics.

While it’s obvious Garfield is an orange tabby cat, there have been questions for years regarding what type of cat he is. The creator has said Garfield is a composite of different breeds. However, judging by his personality, facial features, and his fur pattern, it’s possible that Garfield may be closest to an orange tabby Persian or Exotic Shorthair.

We can certainly say that Garfield is curious. Multiple times over the series, he’s gotten into trouble sticking his nose into situations where he shouldn’t be.

Furthermore, he’s definitely intelligent (I mean, he can talk!). No one could argue that Garfield isn’t vocal. He’s shown almost every comic strip complaining or asking for something. His three loves in life are sleep, coffee, and lasagna—he’s not afraid to ask or demand.

However, we could argue that Garfield is an introvert, a direct contradiction to the Persian’s personality. When Jon brought home Odie, Garfield didn’t want anything to do with him. Additionally, Garfield has multiple instances where he doesn’t want to interact with anyone—even Jon.

Garfield embodies the Exotic Shorthair’s laid-back nature. If allowed to do so, he would lie on the couch for hours or days on end. However, Exotic Shorthairs tend to be playful. It’s a rare day when we can catch Garfield running around or chasing something (unless it’s lasagna).

Are orange tabby cats predisposed to be fat?

The color or pattern of a cat doesn’t directly correlate with their weight. Orange tabby cats aren’t predisposed to being fat just because they are tabbies or because they are orange. However, we may have this perception because orange tabbies are more likely to be male than female.

In most mammal species, males are larger than females. Cats are not an exception to this rule. Male cats tend to be a little larger than the females. Orange tabby cats can grow up to eighteen pounds, with a maximum height of about sixteen inches. Male tabby cats weight two to four more pounds than female tabbies.

The best way to tell if your cat is fat is by looking at them while standing. Your cat should have a slight indention above the hips, almost like a human waist. This is harder to see in cats with long hair. If the waist bulges out rather than in, your cat could be overweight.

Why is my orange tabby fat?

If you suspect your cat is fat, it could be due to lack of exercise, too much food, neutering status, or disease.

Your orange cat may be fat because they aren’t getting enough exercise. Don’t worry—we won’t be recommending your cat start training for a marathon. It’s recommended cats have at least 30 minutes of moderate exercise every day.

Exercise helps them maintain their current weight or lose weight. Play with your cat can be broken down into 5-minute sessions as that is more comparable with how they hunt in the wild.

To encourage play or exercise, find what toys are your cat’s favorite. Activities should tap into their natural instincts. For high energy cats, an exercise wheel may be helpful to burn some of that excess energy.

The best way I’ve found to ensure your cat gets enough exercise is to have two cats in the home! While more responsibility, multi-cat households allow for the cats to entertain and exercise with each other through play. However, adopting another pet isn’t a replacement for playing with your furry friend.

Your orange cat eats too much 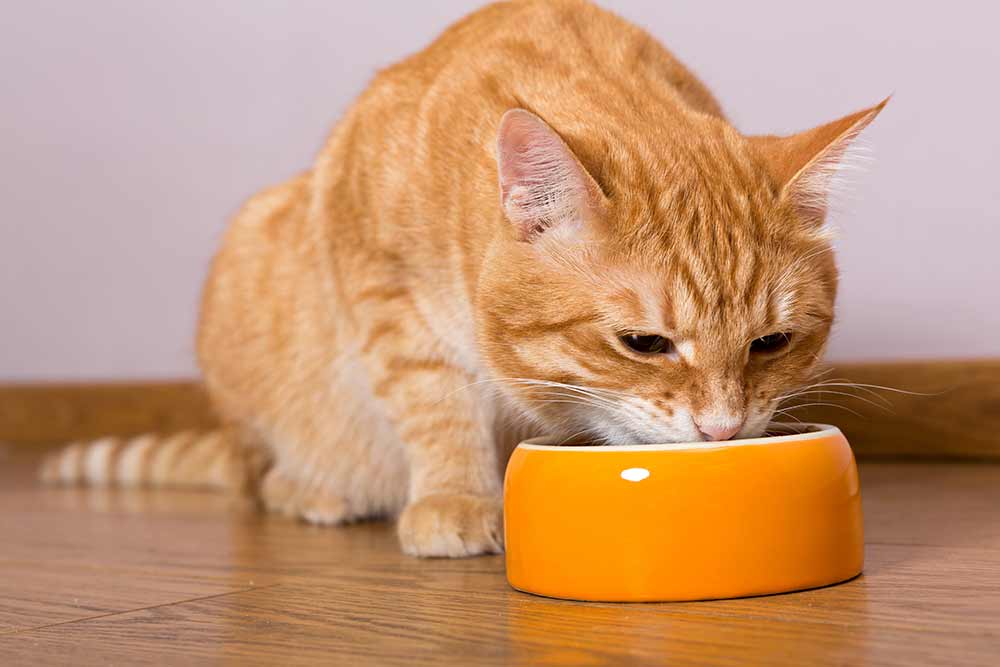 My Maine Coon is obsessed with treats! Every time I’m eating or opening the fridge, he’s two steps behind me, screaming for a snack. While it doesn’t seem harmful to feed him a treat, it adds up. The sneakiest version of calories in many households is feeding your cat treats.

Cats should eat between 24 to 35 calories a day, per pound. Many foods will list the amount on the back for your cat’s size and age. However, this calculation doesn’t account for extra calories or snacks.

For example, my Maine Coon weighs 10 pounds, which means he needs approximately 240-350 calories a day. He gets all the nutrition he needs through his daily food, but again, he likes to beg for treats like he’s starving. Treats are 2-3 calories each, and it’s hard to quantify the caloric level of the human food cats want. If I gave him a treat or piece of food every time he asked, he would be quite overweight and quite overfed!

It’s easy to justify giving treats to your cat, and I’m not disagreeing. Your cat is cute and deserves treats! You just have to adjust their daily food intake with that information. Treats shouldn’t be over 10% of a cat’s daily calories.

Your orange cat is neutered or spayed

If your cat needs a certain caloric intake every day, you may not change the amount of food given when your cat is spayed or neutered. When a cat is neutered or spayed, their metabolism slows down, not requiring as many calories as before. Owners are often unaware of this change, which leads to accidental overfeeding.

This change is brought on by the interruption of hormones that govern metabolism and food intake. While a cat’s metabolism slows down, their food appetite increases after neutering or spaying.

The two-fold phenomenon may explain why your cat’s weight seems to increase despite no changes in food routines.

Your orange cat is sick

Approximately 30-35 percent of the cat population is obese, with older cats more at risk. If your cat is overweight, it may be an underlying illness at play.

The most common illnesses which may cause weight gain include heart issues, parasites, and hypothyroidism.

Heart diseases often have a symptom called ascites, which means excess fluid in the abdomen. This happens due to abnormal blood flow in the heart. If your cat is showing an enlarged belly and it’s not due to lack of exercise or overeating, heart disease may be to blame.

Internal parasites can cause fluid buildup, too, which ensures a potbellied appearance. Most often, parasites are seen in young animals without full immune systems.

Hypothyroidism is when the thyroid glands (which control hormones) don’t work well. The thyroid determines how fast the body uses energy. If the thyroid isn’t working well, your pet can gain weight even if they aren’t eating excessively.

If you suspect your cat is overweight due to a medical issue, it would be prudent to see a vet to determine the underlying cause.

There are different patterns and shades of orange tabby cats!

There are five different patterns of tabby cats:

The color of your orange tabby may range from almost blonde to a deep burnt orange. Your cat’s fur color is influenced by their parentage, but can change. Some fur changes color based on temperature, age, or underlying health issues. Sudden color changes can be due to a hormonal imbalance or tyrosine deficiency.

Most ginger tabbies have freckles

Due to a genetic condition called lentigo simplex, orange cats have dark spots which appear on their nose resembling freckles. The lentigines can also appear on the lips, gums, feet, or ears. However, don’t fear; lentigo is harmless.

Why are all ginger cats tabby?

The “agouti” gene determines whether cats have alternating pigments in the hair (or are tabbies). However, orange cats will exhibit the tabby pattern, whether it has the gene, because it doesn’t affect the expression of the orange color.