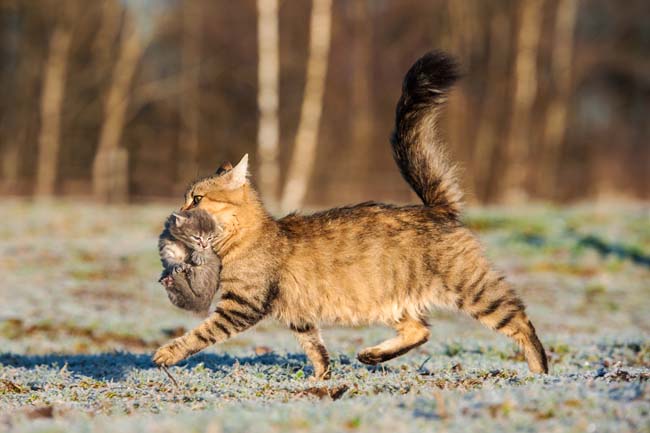 Newborn kittens are altricial, which means they are born completely helpless and unable to move around on their own and do not start to walk until the third week of life. This is a sharp contrast to precocial animals such as horses, deer, sheep, gazelles,  who are born in an advanced state and able to stand and run (from danger) within an hour of birth.

Because of their vulnerability, the mother cat (queen) keeps her kittens safely hidden in a nest. Sometimes it will be necessary to relocate the nest to another location. This may be due to too much human interference, a predator nearby or the kittens have outgrown the current nest. The mother cat can’t transport her kittens in her arms as we do. Instead, she carries her kittens in her mouth by the scruff of their neck. Once the kitten is mobile, the mother will carry them back to the nest if they stray too far. As the kitten moves into adolesence, this reflex behaviour diminishes.

Why do kittens freeze?

If the kitten struggled, the mother could drop or injure it, which could put the kitten at risk. Mother nature has ensured that the kitten instincively tucks up its legs, compacts the body, and becomes immobile when picked up by the mother. Researchers found that maternal carrying reduces body movement, heart rate, and crying in infant humans and mice. Mouse pups responded similarly when picked up by researchers. However, when a small amount of local anesthetic was administered, the immobilisation response was significantly reduced. This indicates that somatosensory (the ability to interpret sensation) as well as proprioception (awareness of the position and movement of the body) both come into play.

Cats aren’t the only animals who carry their infants by the scruff, dogs, hedgehogs, squirrels, foxes, wolves and rodents also move their offspring this way.

No, people should never scruff a cat. There is a big difference between a mother picking up her kitten by the scruff when its weight is 100 – 500 g to picking up an adult cat. Scruffing an adult cat put enormous pressure on the skin as well as the neck and spine. Besides, we don’t need to; we have hands with opposable thumbs to pick up and carry a cat.

Some veterinarians will restrain a cat during an examination by scruffing it. However, this technique is going out of favour with veterinarians moving to kinder and more gentle methods.