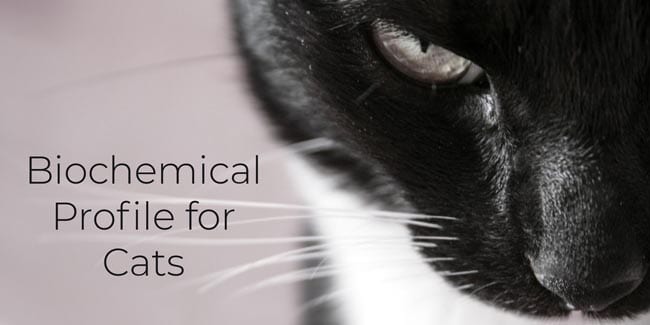 Also known as chemistry profile a biochemical profile is a series of tests your veterinarian may wish to perform to evaluate your cat’s health.

Performed on the clear/fluid portion of the blood. Biochemical profile tests a variety of bodily systems and can give an overall picture of how your cat’s organs are functioning.

Some measure the number of substances in the blood such as glucose, sodium, potassium, cholesterol, others measure the activity of enzymes such as aminotransferase (ALT), creatinine etc.

Alanine aminotransferase (ALT) is an enzyme produced in the liver cells. The ALT test determines the level of this enzyme in the blood, which increases when damage to the liver cells has occurred.

Albumin (ALB): The most abundant plasma protein, albumin formed principally in the liver. It maintains osmotic pressure and as such is extremely important in regulating the exchange of water between the plasma and interstitial compartment (space between cells). Low levels of albumin in the blood can be a sign of liver disease.

Alkaline phosphatase (ALP) is a hydrolase (a group of enzymes which catalyses the hydrolysis of a compound) enzyme produced by the liver. It is present in high concentrations in the liver cells. It is elevated when there is acute damage to liver cells and sometimes with Cushing’s disease.

Blood Urea Nitrogen (BUN): Urea nitrogen is waste products from the breakdown of protein which the kidneys remove and excrete via the urine. High BUN values are indicative of dehydration and poor kidney function. Low BUN values can indicate liver disease.

Calcium (CA): Calcium is the most abundant mineral found in the body, approximately 99% is found in bone and the remaining 1% in extracellular fluid (fluid found outside of the cells and between the cells in body tissues).

It is essential for several functions which include providing strength to bones and teeth, proper nerve impulses and muscle contractions, blood clotting.

Calcium is stored in the skeleton and released as it is required. In combination with phosphorus, it forms calcium phosphate, the dense, hard material of bones and teeth.

Hypocalcemia (low levels of calcium in the blood) is a major clinical manifestation of hypoparathyroidism (reduction or absence of secretions of the parathyroid gland), eclampsia (in lactating females), dietary insufficiency, antifreeze poisoning and Cushing’s disease.

Chloride: Chloride is an electrolyte. Its role is to help the body maintain a normal acid balance in the blood.

Cholesterol (CHOL): Cholesterol is a fatty substance produced by the liver and found in all parts of the body. It is an essential component of body cells. It is a building block for certain hormones and is also used to build cell walls.

Creatinine: Creatinine is a waste product of muscle activity found in muscle and blood which the kidneys remove and excrete via the urine.

High levels of creatinine are a sign of kidney disease or dehydration.

Glucose: Glucose is blood sugar that is a major source of energy for the body.

Phosphorous: Phosphate is an abundant mineral in the body. Together, calcium and phosphate work closely to build and repair bones and teeth. Approximately 85% of phosphate is found in the bones, the remaining 15% in the cells where it is responsible for energy metabolism as well as being an integral structural component of DNA and RNA. Excess phosphate is filtered by the kidneys and excreted in the urine. As the kidneys begin to fail, they are less able to get rid of excess phosphate, and levels begin to build up. Other causes of high phosphorous include Addison’s disease and underactive parathyroid gland. Overactive parathyroid gland, insulin overdose, dietary insufficiency and certain cancers can cause low phosphorous.

Potassium: Potassium is an essential electrolyte which performs several functions including;

Most potassium is found in the body’s cells. Cats obtain it through their diet. Kidneys control levels of potassium by excreting excess via the urine.

Sodium: Sodium is an electrolyte necessary for maintaining normal muscle function. Levels may be increased in cats who are dehydrated or decreased in cats with Addison’s disease.