Also known as pinnae, the outer (visible) part of the cat’s ear is susceptible to developing thickening, crusting, ulceration, alopecia, and scaling which are collectively referred to as ear edge dermatitis or ear margin dermatitis.

There are several causes of crusty, scaly ears in cats and the most common causes include scabies, ear mites, allergies, sunburn, and systemic endocrine disorders. Crusty ear margins may be the only symptom your cat has, or you may notice other signs such as itching, discharge and head shaking. 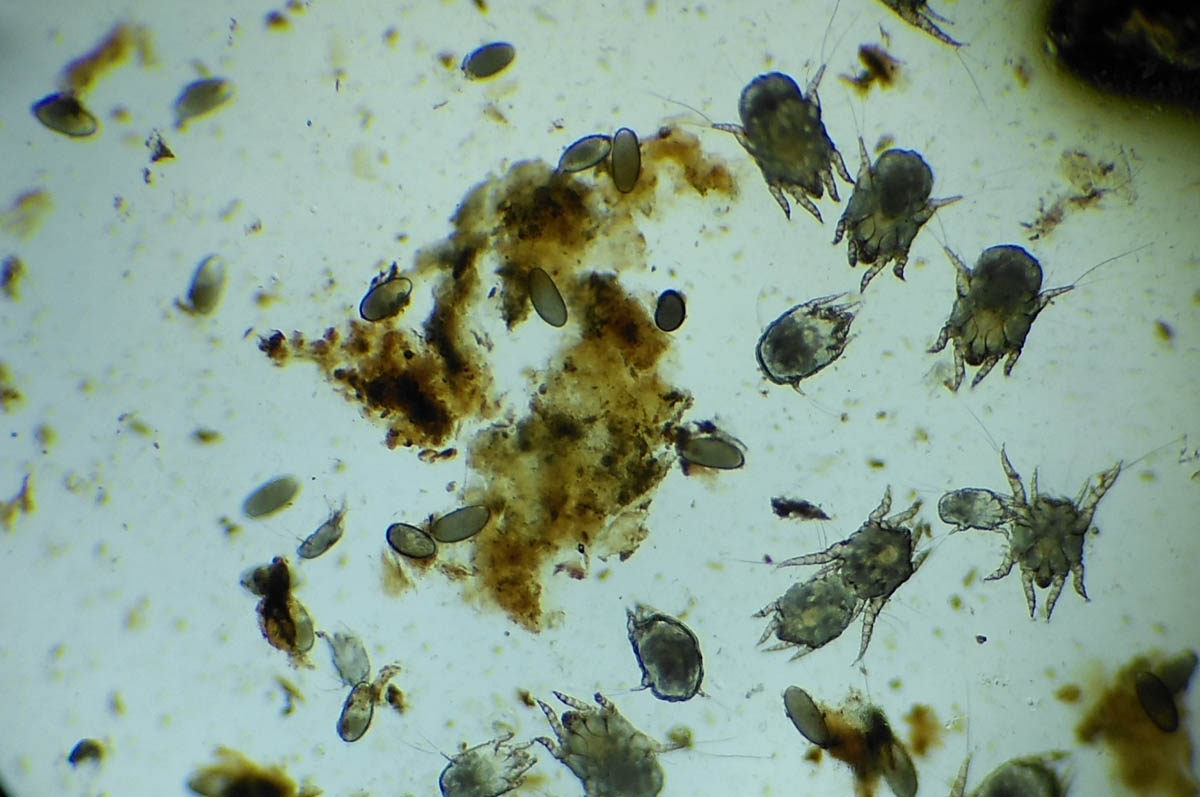 Ear mites (Odotectes Cynotis) is a common parasitic mite that invades the ears and occurs in kittens most often.

Diagnosis: Your veterinarian will prepare a swab of the material in the ear canal and examine it under a microscope to look for and identify the mites.

Treatment: The ears are first flushed and cleaned and then treated with a parasiticide.  Ivermectin, milbemycin (MilbeMite), selamectin (Revolution), imidacloprid (Advocate). Your veterinarian can recommend the best product for your cat. 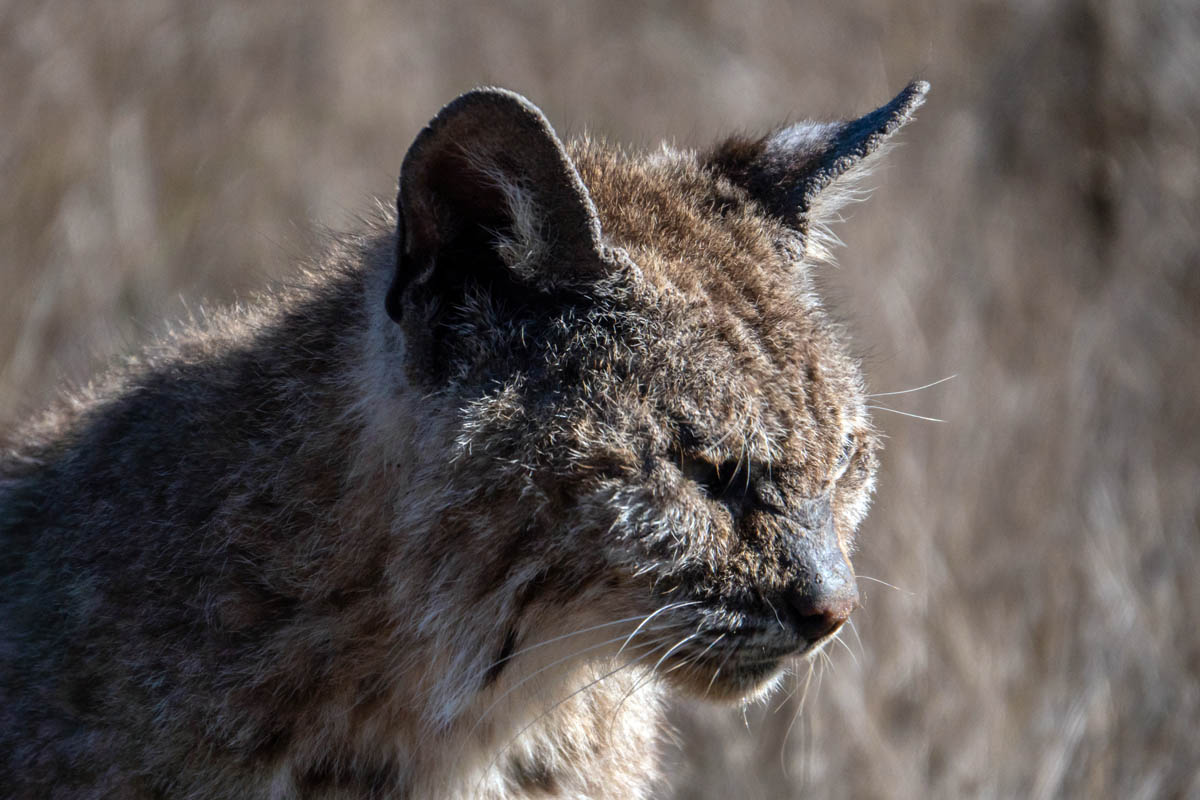 Notoedric mange (feline scabies) is a rare parasitic infection caused by the Notoedres cati mite. This mite burrows into the cat’s skin, laying eggs along the way. Cats become infected by direct contact with an infected cat.

Diagnosis: A skin scraping test uses a scalpel blade to gently scrape along the surface of the skin to look for the presence of mites or mite eggs.

Treatment:  This mange may be treated with oral ivermectin or topical products such as Revolution. 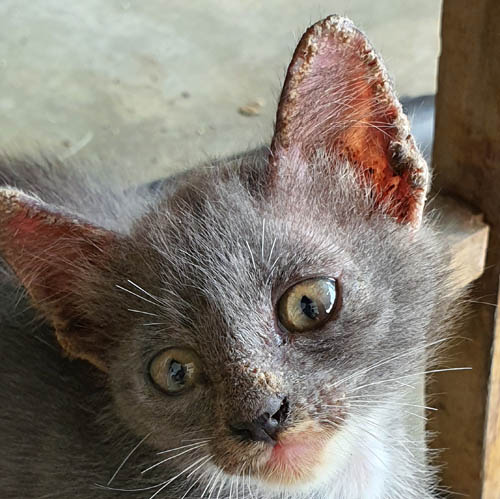 Demodicosis is an inflammatory skin disease in cats caused by the Demodex mite. There are two species that can infest cats, Demodex cati and Demodex gatoi.

Diagnosis: Skin scrapings and/or swabs from the ears are examined under a microscope to look for the presence of mites.

The treatment for Demodex mites in cats depends on which mite the cat is infested with. Demodex cati is not contagious among cats but affects cats that have an underlying immune system dysfunction. Treatment is aimed at correcting the immunosuppression. Mites will be targeted with medications such as oral ivermectin and topical Revolution.

In cats with Demodex gatoi, the mite is contagious and all cats in the household must be treated at the same time. The treatments for ridding the cats of the mite are the same as for Demodex cati, such as ivermectin and Revolution. 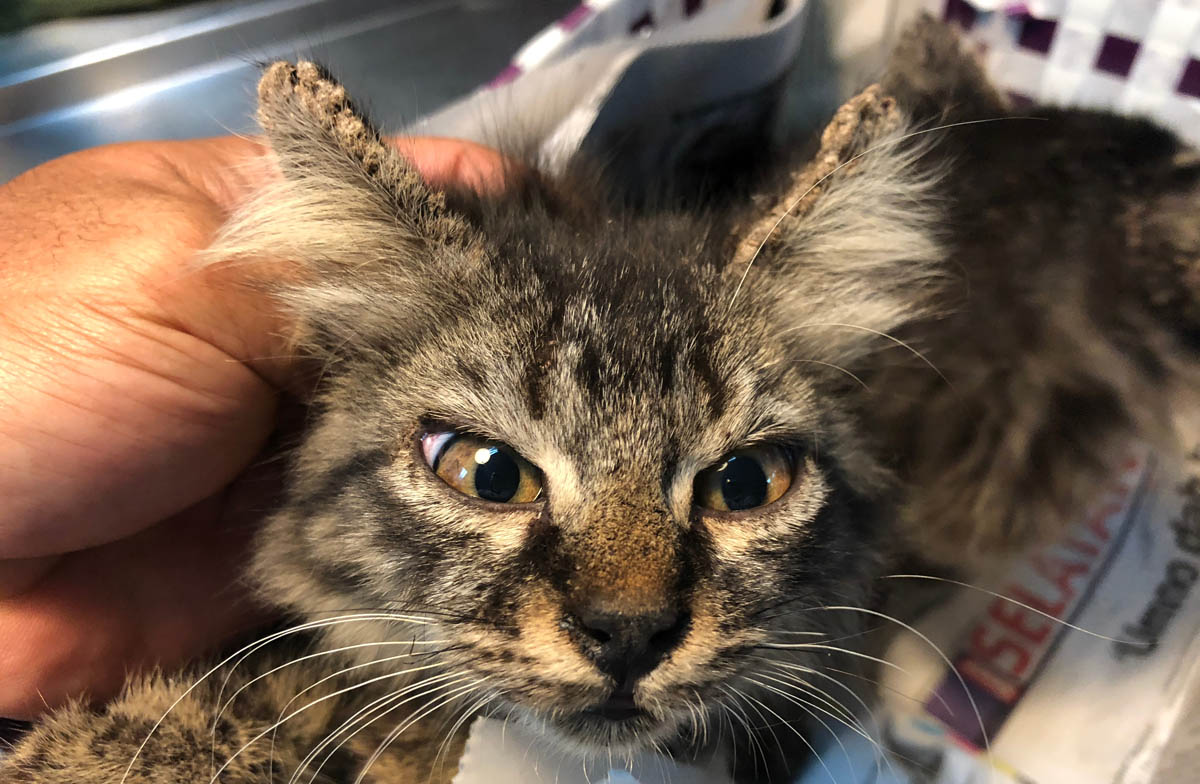 This type of mange is far more common in dogs than it is in cats. Caused by the parasitic mite Sarcoptes scabei, this mite most often affects kittens and cats living with dogs. The parasite is highly infectious and can live for several days off the host. This mite is also contagious to humans.

Diagnosis: Skin scraping, although it is not uncommon for a result to come back negative.

Ivermectin or Revolution will be administered to kill the mites. 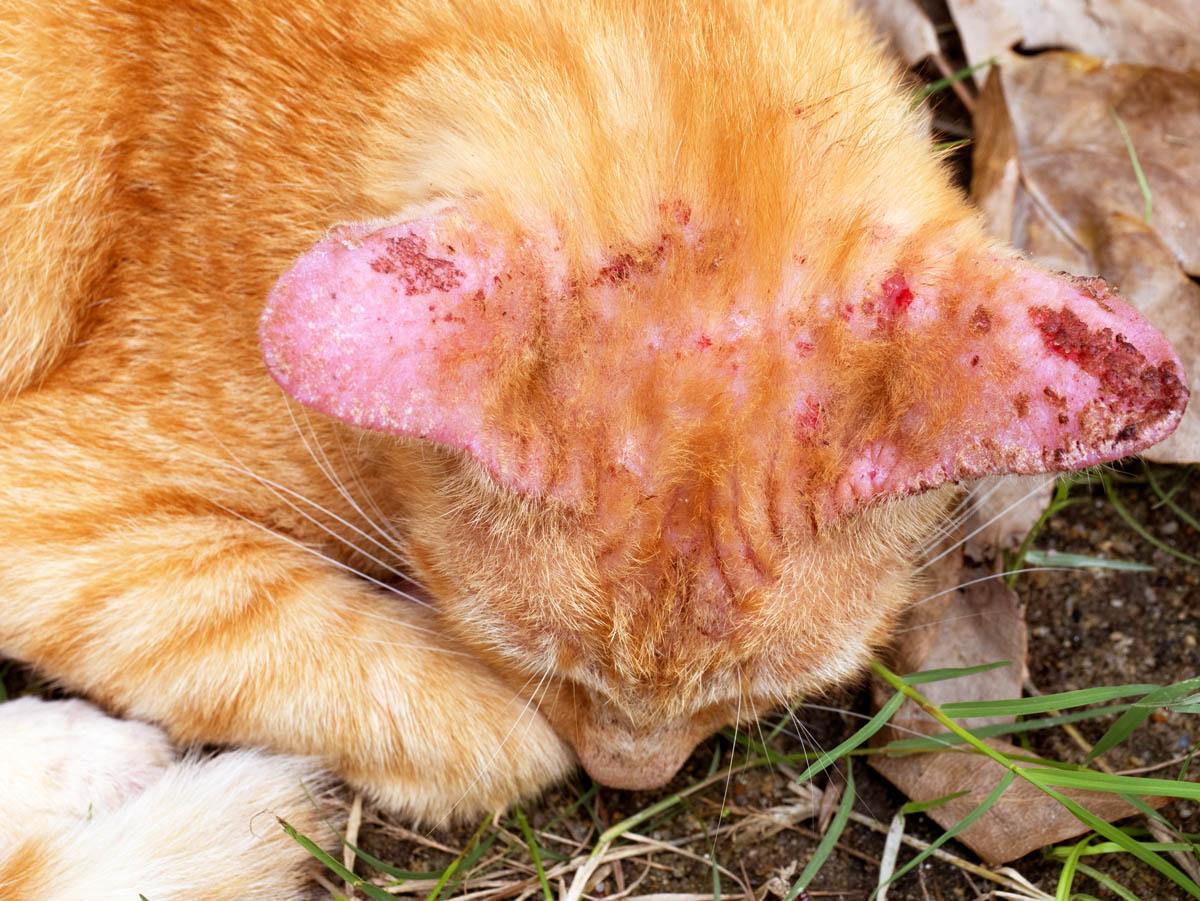 Ringworm in cats is a highly contagious, generally superficial fungal infection of the skin, fur, and claws that is caused by a fungus of the genus Microsporum and Trichophyton.

Infection occurs via direct contact with an infected animal or fungal spores, which are in the environment on objects, and may include grooming equipment, bedding, and collars.

Circular, raised patches of rough and scaly skin. Ringworm can occur on any part of the cat, including the ears.

Diagnosis: Wood’s lamp examination, skin scrapings, fungal culture, examination of hairs to look for the presence of fungal spores and fungal PCR may all be used by your veterinarian.

Treatment: Anti-fungal medications such as itraconazole and griseofulvin are given orally.

Some cats can develop hypersensitivity to insect bites and mosquitoes are the most common culprit. However, any biting or stinging insect can produce a hypersensitivity. As your cat scratches, the ear can become further damaged, exposing the underlying layers to bacteria.

Diagnosis: The veterinarian can diagnose an insect bite based on presenting signs and history.

Treatment: Apply an ice pack, cortisone cream, and if itching/swelling is a problem, an antihistamine such as Benadryl can relieve symptoms. If the area has become infected, antibiotics may need to be prescribed. Always speak to your veterinarian before medicating your cat.

Sunburn can occur in cats, particularly those who have pale skin colouring. The ears and nose are most vulnerable as they have the least amount of hair. Prolonged exposure to the sun can lead to squamous cell carcinoma (see below).

Symptoms:  Redness and itching, particularly around the ear margins. Over time, with repeated exposure, the skin can become thickened and crusty.

Diagnosis: In most cases, the veterinarian can diagnose sunburn based on physical appearance and a history of sun exposure.

Treatment: Antibiotics and steroid cream and limiting your cat’s exposure to the sun is the best preventative. Your veterinarian may recommend a topical sunscreen for your cat, but do not use sunscreens for humans unless your veterinarian has said it is safe to use. Many contain zinc, which is toxic to cats.

Cats repeatedly exposed to the sun can go on to develop solar dermatitis, in which the skin has become chronically damaged.

Symptoms:  As each summer passes, the ears become progressively worse with scaling and thickening of the skin, itchiness, and ulceration. 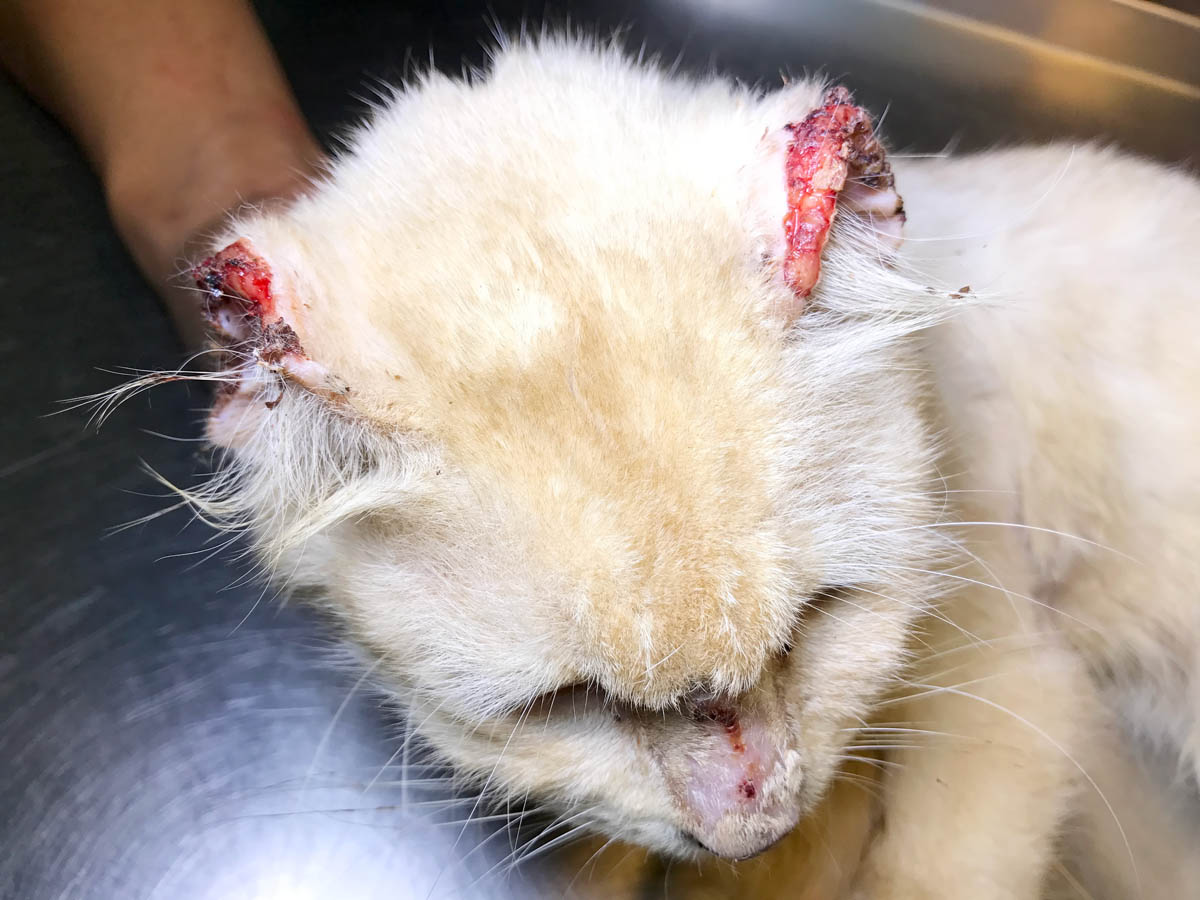 Squamous cell carcinoma is a malignant tumor of the skin, and one of the most common causes is excess exposure to the sun. Tumors can develop on any part of the body, but the ears, nose, mouth, and eyelids are the most common locations.

Diagnosis: A biopsy of the tumor must be performed to get a diagnosis.

Treatment: If the mass is resectable, surgery may be performed to remove the affected area (partial pinnectomy), followed by chemotherapy or radiation therapy. Antibiotics for secondary infections as well as pain medications will be prescribed.

Several allergies can develop in cats with a wide range of symptoms. The most common are: 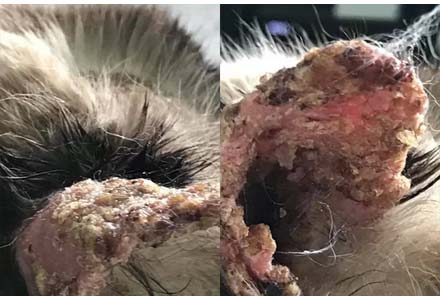 Autoimmune skin disorders are thankfully quite rare in cats, but pemphigus is the most common of them all. The cause isn’t fully understood, but it is thought there may be a genetic component, or it could be related to exposure to sunlight or certain medications. There are three types of pemphigus in cats ranging in severity.

Diagnosis: Your veterinarian will perform a  biopsy to diagnose the condition. Additionally, direct immunofluorescence can be run on the cat’s blood to look for antibodies.

A rare autoimmune disorder that can affect several different organ systems of the cat, including the skin. Systemic lupus erythematosus (SLE) is caused by the body producing antibodies against itself (known as autoantibodies) that attack various systems, one of which may include the skin.

Diagnosis:  SLE requires multiple tests, which may vary depending on the system affected.

Treatment:  There is no cure for SLE; the goal of treatment is to relieve symptoms, which can include oral and/or topical corticosteroids and other immunosuppressants to reduce inflammation and itching. Limiting the cat’s exposure to sunlight is also helpful.

Diagnosis of frostbite is based on a history of exposure as well as physical signs.