Cats are often afflicted with scabs, which can be extremely uncomfortable. Itching often accompanies scabs and sores, which causes further damage as well as the potential to develop a secondary bacterial infection.

Initially, some irritations may be minor, and the cat himself causes further damage due to itching, other disorders may cause large lesions. Scabs may be small and numerous, large and singular or a combination of both. The neck may be the only affected area or scabs and crusting may be more widespread. Itching is common but not always present. 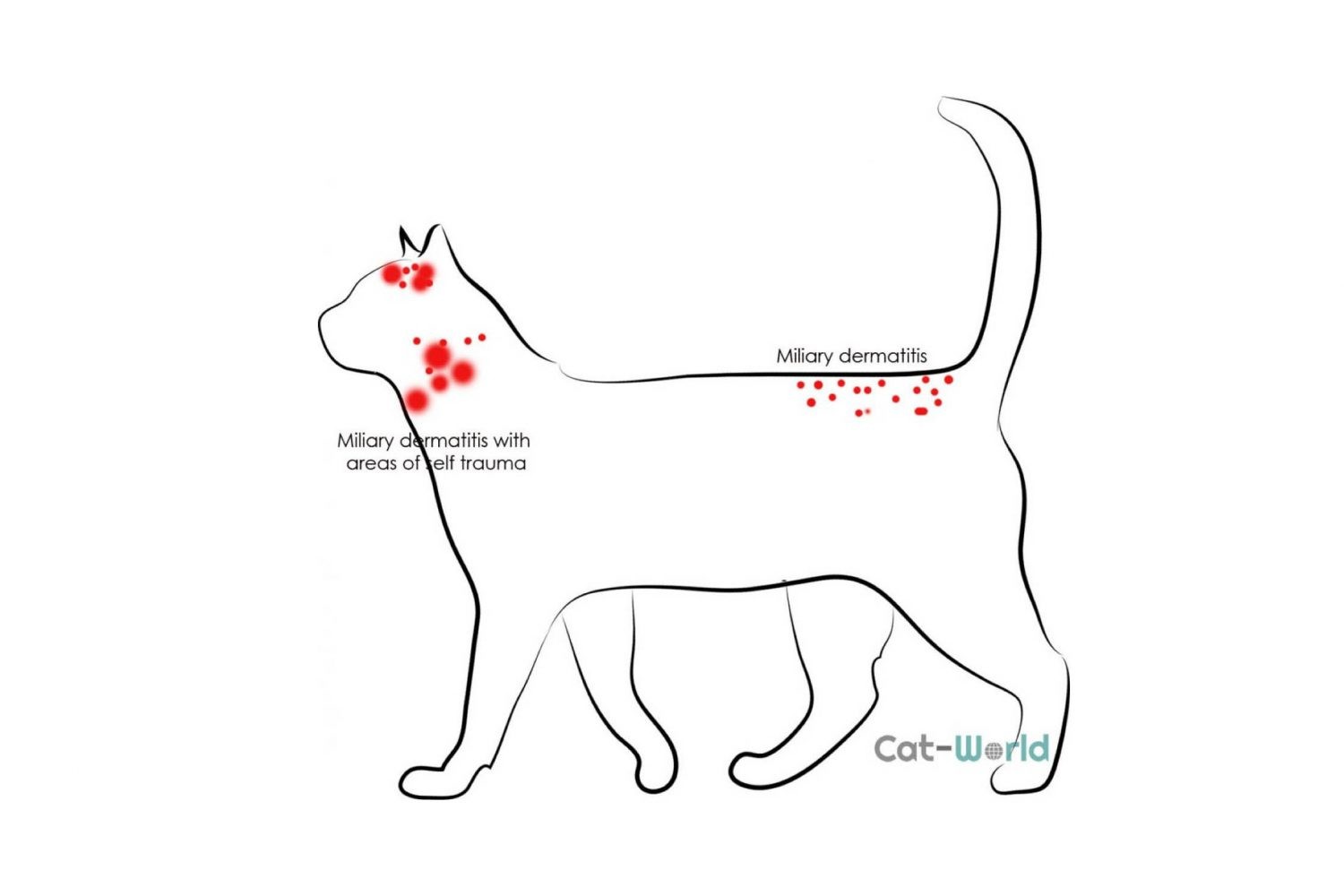 The most common cause of scabs and sores on the cat is flea allergy. Many cats can develop a sensitivity to the proteins in the flea’s saliva and just one flea can be enough to cause an immune reaction.

Symptoms: Crusty lesions particularly around the neck and on the back, close to the tail. Itching and scratching accompany sores and scabs. Scratching can damage the skin resulting in the formation of coin-sized crusts.

Treatment: Diligent flea control as well as treating the environment. A short course of oral glucocorticoids (usually prednisolone) to control inflammation and relieve itchiness. Long-term steroid use can produce side effects, therefore will be discontinued once symptoms resolve.

Allergic reaction to a cat collar

Some cats can develop a sensitivity or allergy (known as contact allergy, see below) to the chemicals found in flea collars or the plastics themselves.

Symptoms: Itching, lesions, sores and hair loss around the neck.

Treatment: If your cat has a sensitivity/reaction to a flea collar, remove it immediately and find an alternative flea product. Redness or sores should be evaluated by a veterinarian. Only use flea collars for cats as dog flea collars can contain chemicals toxic to cats and never combine flea collars with other flea treatments unless your veterinarian has told you it is safe to do so.

Regular collars can also cause allergic reactions in some cats. The photo below is of my Oriental cat who along with his DSH sibling, developed an allergic reaction to a standard cat collar which resulted in itching, scratching, hair loss and small lesions.

Some cats can have an adverse reaction to flea treatments which causes itching, redness, blistering and sores and hair loss where the product has been placed.

Symptoms: Areas of hair loss, red and inflamed skin which forms a scab.

Treatment: If you notice symptoms shortly after flea treatment administration, rinse it off the skin with lukewarm water for 20 minutes. If a severe reaction has developed, including redness, pain, and loss of skin, see a veterinarian. Bring along the packaging of the treatment you applied to your cat.

Allergies come in four forms. Contact, food, inhaled and insect with a considerable number of triggers including dust mites, insect bites and stings (flea allergy dermatitis is a form of insect allergy but is so common it gets its own paragraph), medications, pollens, household chemicals, cat collars (see above). Allergies may be seasonal or year-round depending on the underlying cause.

Symptoms: Itching, especially around the head, neck, and back, miliary dermatitis (crusty papules), open sores or scabby lesions. These may wax and wane.

Diagnosis: Depending on the suspected cause, your veterinarian may perform a skin prick test which injects a small amount of many common allergens onto the skin to see if there is a localised reaction. If a food allergy is suspected, your cat will be put on a new type of cat food (usually a novel source of protein your cat hasn’t been exposed to such as duck or lamb), to see if symptoms go away. If they do, your cat will then resumes his regular diet to see if symptoms return.

Treatment: Avoidance of the allergen if possible. Switching your cat to a hypoallergenic diet can treat food allergies. Diligent flea control for FAD. Insect bites and stings should resolve quickly. Administer Benadryl to control itching.

Bites and stings can cause localised inflammation or in some cats, an allergic response. Ants, wasps and bees are the most common insects to bite or sting cats and the incidence increases in summer; outdoor cats are more commonly at risk.

Symptoms: Small raised bump at the site of the injury, localised swelling, hives, itching, pain and redness. Itching can lead to damage to the skin and secondary infection.

Treatment: Most insect bites and stings are self-limiting and will resolve in a day or so. Carefully remove wasp or bee stings. Applying an ice pack or cortisone cream can help to reduce swelling. If itching continues to be a problem, you can give your cat some Benadryl to relieve symptoms.

Seek veterinary care immediately if your cat is experiencing severe swelling or breathing difficulty. Have somebody phone ahead to alert the veterinarian you are bringing in a cat who may be experiencing anaphylaxis.

Symptoms: Itching, hair loss and thickened/crusty like appearance to the skin. Ear margins, head, and neck are most commonly affected, although other parts of the body can be infected. Itching can be so intense that self-mutilation occurs. This damages the skin and runs the risk of secondary bacterial infections.

Diagnosis: Skin scraping and observing the mites or their eggs under a microscope.

Treatment: Lime sulfur dips or Revolution, which is a topical flea/worming medication. Clip cats with long coats before treatment and wash all bedding thoroughly.

Also known as dermatophytosis, ringworm is a common fungal infection that affects the skin, fur, and nails of cats and other species. It is caused by a microscopic group of parasitic fungal organisms known as dermatophytes, meaning “plants that live on the skin“. Ringworm invades the dead, outer layers of the skin, claws, and hair.

Ringworm can occur on any part of the body, with raised, circular lesions and hair loss. Most affected cats aren’t itchy. Kittens and cats in crowded environments such as shelters are at higher risk. Ringworm is highly contagious and can quickly spread from cat to cat, cat to human or human to cat.

Diagnosis: A simple way to diagnose ringworm is to use an ultraviolet Wood’s lamp on the cat, although only around 30-50% of ringworm isolates will fluoresce. The infected hair shafts will glow a fluorescent green when exposed to a Wood’s lamp. Wood’s lamp examination will likely be positive in most cases of M. Canis dermatophytosis. Especially in cases of untreated infections.

Treatment: Lime sulfur dips to kill the fungus or medications such as Itraconazole or Griseofulvin. Clip cats with long coats before treatment.

An autoimmune skin disorder caused by the production of antibodies towards specific proteins in the skin and mucous membranes which cause separation of the epidermal cells. This results in areas of hair loss and fluid-filled blisters which break open and form a dry crust.

Symptoms: Blisters typically begin around the eyes and the bridge of the nose before spreading to the ears, neck, feet, and belly. Affected areas are painful and itchy.

Diagnosis: Biopsy of a blister, direct immunofluorescence to look for antibodies, cytological examination of a pustule. As well as routine screening such as biochemical profile, complete blood count, and urinalysis.

Treatment: Immunosuppressive therapy to stop the cat’s immune system from attacking the tissues. Corticosteroids are the first choice of treatment. If there is no improvement within 7-14 days, low-dose chemotherapy drugs may be added. Antibiotics may also be prescribed if your cat has developed a secondary skin infection.