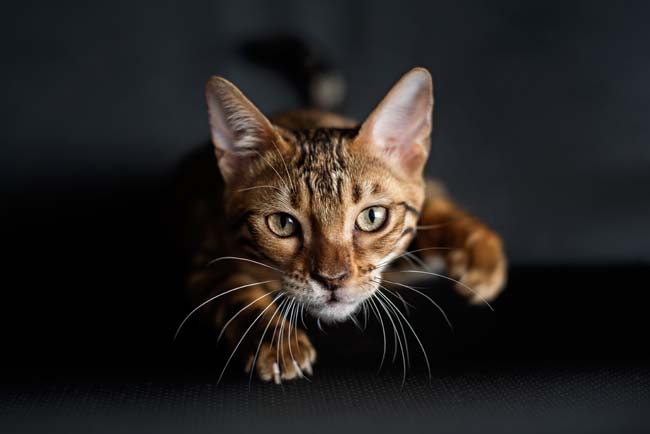 
Signs of poisoning will vary depending on the type of poison the affected prey has consumed.

Rodenticide inhibits the coagulation by depleting the body of vitamin K, which is required for the formation of certain clotting factors. Once the clotting factors are no longer available, internal bleeding results. The poison does not affect clotting factors already in the blood, so there is usually a lag of 2-3 days before the onset of symptoms.

1080 is a poison used in Australia and New Zealand to kill wild dogs, foxes and rabbits. There is very little information on 1080 toxicity in cats. Cats can be exposed either via a poisoned animal or by eating bait laced with 1080 (primary poisoning) and the poison works by inhibiting energy production in the cells. Dogs are more commonly affected than cats, due to their scavenging behaviour.


Lead poisoning can occur if your cat consumes an animal which has been shot using lead pellets, either via hunting or being fed certain ‘pet meats’ which contain ground-up and wild-caught meat such as kangaroo or rabbit.

Rodenticide and 1080 aren’t the only causes of secondary poisoning in cats, but they are among the most common. While I’ve not heard of any cases, theoretically a cat could become poisoned with lead if it consumed a wild animal that had been shot with a lead pellet.

This depends on the poison. There is no antidote for rodenticide or 1080; treatment is aimed at preventing further absorption.

The priority is to induce vomiting and/or pump the stomach followed by administration of activated charcoal which binds to the toxin, to prevent further absorption.

Treatment for rodenticide toxicity will include:


Treatment for 1080 toxicity are aimed at, symptomatic and supportive care.

The earlier your cat is seen by a veterinarian, the better the outcome.

How to avoid secondary poisoning in cats


Don’t allow cats to roam outside if you do want them to have access to fresh air; a cat enclosure is the safest option. This, of course, won’t stop rodents coming into the enclosure, but it should reduce the number of rodents your cat has access to.

Be extremely diligent if you are bating rodents around the home and garden. Speak to a pest controller for safer options such as traps.

1080 doesn’t seem to be as big an issue as rodenticide as it tends to be used in areas of bushland and away from towns. If you are worried, contact your local council to find out if it is used in your area.


I have looked for information on secondary poisoning occurring in cats who eat poisoned bugs (in particular cockroaches). While there appears to be no information out there, I recommend caution when using insect sprays around the house and remove any dead or dying cockroaches as soon as you see them to avoid your cat eating one which has been exposed to insecticide.