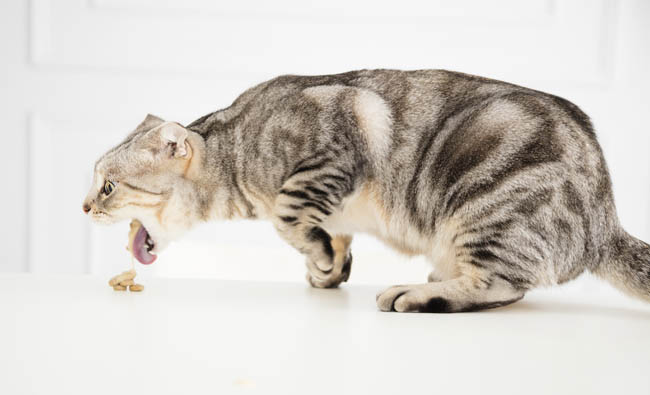 Table of Contents hide
1 At a glance
2 About
3 Causes
4 Should I take my cat to the veterinarian?
5 Diagnosis
6 Treatment

Medically known as emesis, vomiting is a chain of events of which the end result is the forceful ejection of the stomach contents and is one of the most common reasons cat owners take their cat to the veterinarian.

There are a number of possible causes of vomiting cats, it may be acute (sudden onset), chronic (over a period of time) or sporadic (coming and going). Acute vomiting is defined as vomiting which has been present for less than one week and is usually the result of a single insult to the stomach and is self-limiting, chronic vomiting lasts longer than a week, can be intermittent or persistent in nature.


The most common cause of vomiting is swallowing indigestible products (hair, grass) which irritate the stomach, this is known as irritative gastritis.

Should I take my cat to the veterinarian?


An isolated incident of vomiting where the cat shows no other signs of illness is not uncommon and generally doesn’t necessitate a trip to the vet. If the vomiting continues beyond 24 hours, if the cat is under 12 months or if you notice other symptoms along with the vomiting, then a trip to the veterinarian is necessary.

You should seek veterinary if any of the following symptoms occur:


If possible, when you take your cat to the veterinarian, bring along a sample of the vomit, this will assist the vet to determine the underlying cause of the vomiting.

Your veterinarian will perform a complete physical examination of your cat and obtain a medical history, which will include:

The type of vomiting can help the veterinarian narrow down a possible cause. Types include:

Vomiting which has lasted longer than two weeks.

This is occasional vomiting that is not related to eating, the cat vomits on and off.

Forceful ejection of vomit which goes a considerable distance.

This may be due to intestinal obstruction or in cases of prolonged vomiting, the stomach contents may have already been vomited and all that remains is liquid.


The goal of treatment is to find and address the underlying cause as well as provide supportive care.

The type and severity of clinical signs will determine if the cat is hospitalised or treated as an out-patient. A cat who is otherwise bright, alert and responsive, still eating and has no accompanying symptoms may only require home care.