What is liver disease?

Also known as hepatic disease, liver disease is a collection of diseases, all of which result in damage to the liver leading to impaired function. Liver disease can be acute (sudden onset) or chronic (slow and progressive).  Cats of any age can develop liver disease, however, portosystemic shunt or toxic hepatopathy (ingestion of toxins or drugs) are more common in younger cats while primary cancers typically occur in cats who are ten years or older.

The liver is the largest internal organ of the body, and it is responsible for several metabolic, functional and detoxification processes.  It is located in the abdomen, under the diaphragm. The liver is the only organ in the body that is capable of regenerating itself and has an amazing functional reserve with up to 70% of the functional mass impaired before symptoms may present.  Two blood vessels enter the liver, the hepatic portal vein contains deoxygenated blood from the spleen, pancreas, and digestive system and the hepatic artery contains oxygen-rich blood from the lungs.

Functions performed by the liver 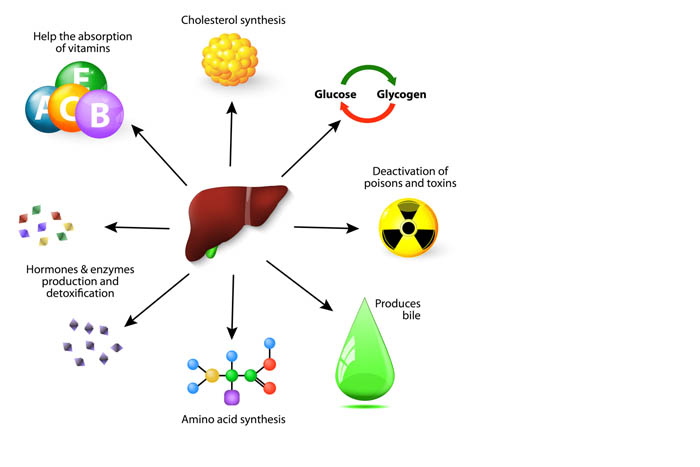 Hepatic Lipidosis is the most common type of liver disease in the cat and occurs when your cat becomes anorexic (stops or reduces the amount of food he is eating), the body begins to use fat stores as fuel which the liver breaks down. Unfortunately, the liver sometimes becomes overwhelmed and is unable to process this fat as quickly as necessary, leading to a build-up of fat in the liver, which interferes with normal liver function.

The second most common form of liver disease, that is caused by several related inflammatory and or infectious disorders of the liver and/or the biliary tract. Cholangitis relates to infection or inflammation of the bile duct, and cholangiohepatitis is inflammation of the biliary system and by extension, the liver. Causes of infection may often include FIP, Pancreatitis, inflammatory bowel disease (IBD), bacterial infection, parasitic infection (including toxoplasmosis).

As the liver is responsible for processing toxins from household cleaners, insecticides, plants, drugs and other toxins, it is vulnerable to damage when the cat consumes or is exposed to toxic substances (hepatotoxins). There are too many possible toxins to list in this article, but some common ones include excess amounts of vitamin A and iron, Naphthalene (found in mothballs), Methimazole, Xylitol, Diazepam, Effexor, acetaminophen and aspirin.

Caused by intracellular protozoa known as Toxoplasma gondii, most infected cats will show no symptoms of infection, however in some cases damage to various organs can occur, including the liver. This is most often in immunocompromised cats such as those with FIV.

There are many different types of tumours that affect the liver. Primary liver cancer (originating in the liver) is uncommon in cats, hepatocellular carcinoma and bile duct tumours are the most common. Primary liver tumours make up only 1-3% of cancers in cats. Most malignant tumours of the liver are secondary, having originated from another site and spread to the liver. Benign tumours are far more common in cats.

Portosystemic shunts are abnormal communications between the portal and systemic venous system which allows intestinal blood to be delivered to the systemic circulation before hepatic detoxification. A shunt means that blood bypasses the liver, resulting in blood not being detoxified by the liver and a rise in toxins. Portosystemic shunts may be congenital or acquired, most shunts in cats are congenital (known as CPSS), and cats demonstrate clinical signs within 12 months of age.

The veterinarian will perform a physical examination of your cat and obtain a medical history from you, including any current medical conditions he may have, medications he’s on and exposure to toxins.

Hepatic lipidosis is often caused by a cat’s refusal to eat; obesity also predisposes a cat to this disease. When changing your cat’s diet, do so slowly by mixing a small amount of the new food in with the old. Gradually increase the new food while decreasing the old food over 5-7 days. Closely watch your cat for signs of appetite loss during this time.

Only administer medications prescribed by a veterinarian and always monitor for side effects.

Keep all medications, household cleaners, and other toxins away from your cat in a locked cupboard. I also recommend using natural products such as white vinegar when cleaning as much as possible — the fewer chemicals in the home the better for all of us.