A cat’s fur comes in all textures, patterns, and colors—and whatever your favorite feline looks like, it comes down to genetics. Your cat receives half its DNA from each parent, forming your one-of-a-kind kitty.

Some cats are even more unique than the rest, and one genetically diverse tortoiseshell cat named Venus has taken the internet by storm. With a perfectly symmetrical division, half of Venus’s face is black and the other is orange tabby. Her genetics get even more amazing with the presence of one blue eye and one yellow eye. Scientists have made some guesses on how her unique appearances came about, but have ultimately caulked it up to “absolute luck”.

A post shared by Venus the Two Face Cat (@venustwofacecat)

Calico cats aren’t a breed of cat, instead calico refers to their unique coat pattern and coloration. Commonly, cats with calico coloration and pattern flaunt a coat that is 25 percent to 75 percent white with orange and black patches. Outside North America, “calico” is called “tortoiseshell and white.” If a cat appears to be calico but they have a tabby pattern, they’re known as a “caliby”.

Are all calicos female?

Calico cats are almost always female, with a few rare exceptions. That’s because orange (red) is carried on the X chromosome. Female cats have two X chromosomes while male cats only have one. If a male cat is calico colored, that means his chromosomal make-up is XXY, and he’s likely infertile.

Did you know there is more than one type of calico coloring in cats? Muted calico cats are also known as dilute calico cats. These cats still have the adorable calico coloring, but the colors are muted, producing a domestic cat with a tri-color coat comprised of grey (blue) and cream along with areas of white. 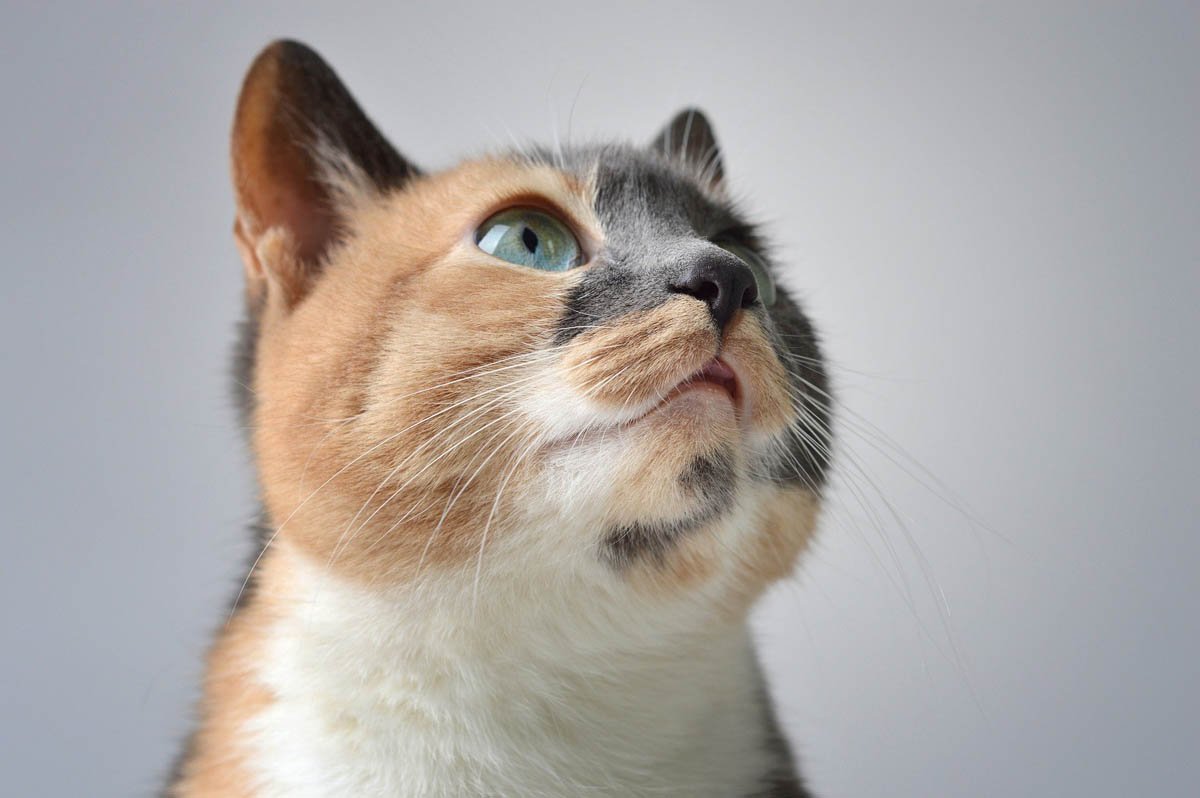 A tortoiseshell cat is a cat with a coat color made up of mottled patches of black, chocolate, or grey with red or cream. This unusual coat pattern is sex-linked and is almost exclusively found in female cats.

The most common color combination is black and red, which consists of almost equal amounts of black to red. In some cats, there will be more red than black, which is known as a reverse tortie.

Are all Tortoiseshell cats female?

Like calico cats, tortie cats are almost always female with a few rare exceptions. That’s because orange (red) is carried on the X chromosome. Female cats have two X chromosomes while male cats only have one. If a male cat is calico colored, that means his chromosomal make-up is XXY, and he’s likely infertile.

Just like dilute or muted calico cats, tortoiseshell cats can also carry the dilute gene. Dilute tortie cats will have soft gray and cream colors. This is because the dilute gene changes from black and red to grey and cream. 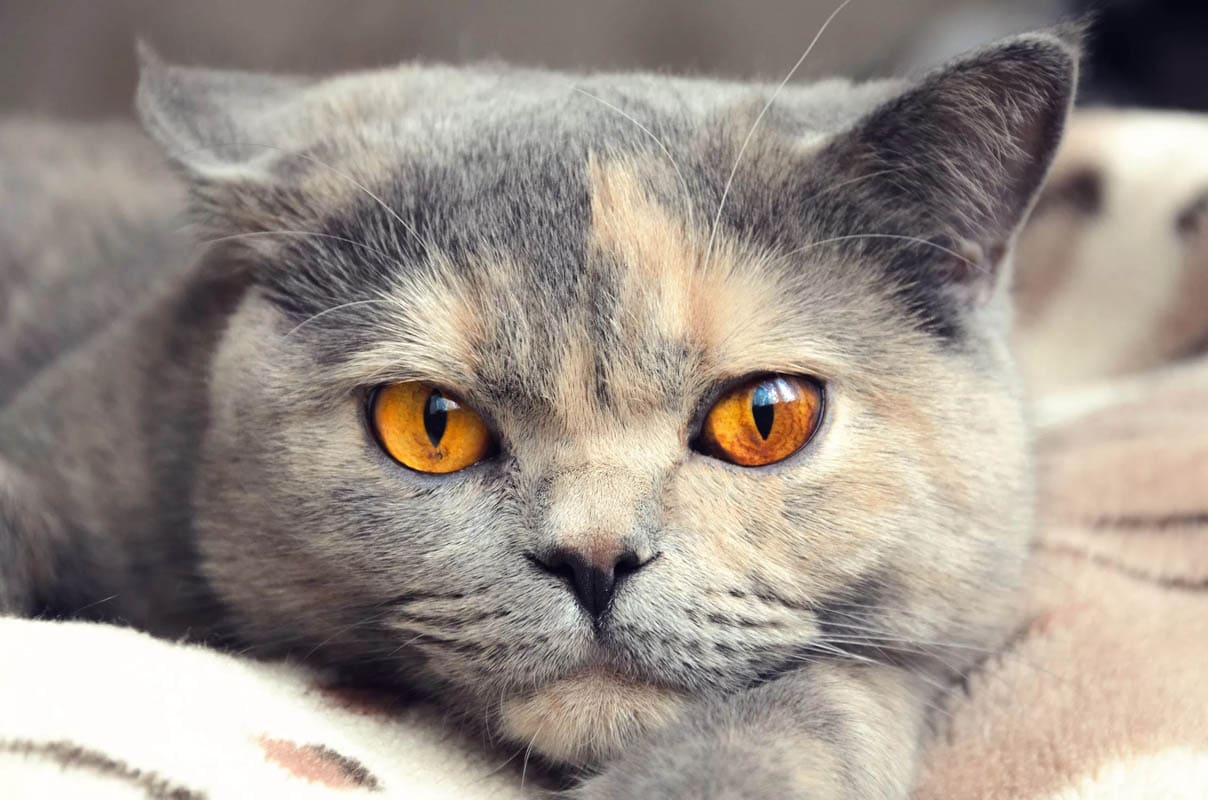 If a Calico is good luck and a Black cat is bad luck, what’s a Tortoiseshell?

The calico cat is thought to be good luck around the world. In Japan, it is thought that the luck of the calico cat reaches as far back as the 17th to mid-19th Century. Today, you’ll find the calico bob cat happily waving its paw throughout Japanese businesses and shops—known as the beckoning cat or Maneki Neko. In Ireland, it was thought calico cats had healing powers, especially when it came to warts. And in the U.S., calico cats were nicknamed money cats because the rarity of males was thought to be valuable.

The most common type of calico cat is the domestic, or moggy. However, the coloration can be found in some pure breeds of cat too.

As their name suggests, these all-colored cats can be spotted by their short, stubby tails. The Japanese Bobtail and American Bobtail cat breeds can accept any coat color, but it’s their orange and black coloration that caught the eye of the Japanese culture. The icon for good luck, black- and orange-colored Bobtail cats are the breed of the beckoning cat or Maneki Neko. 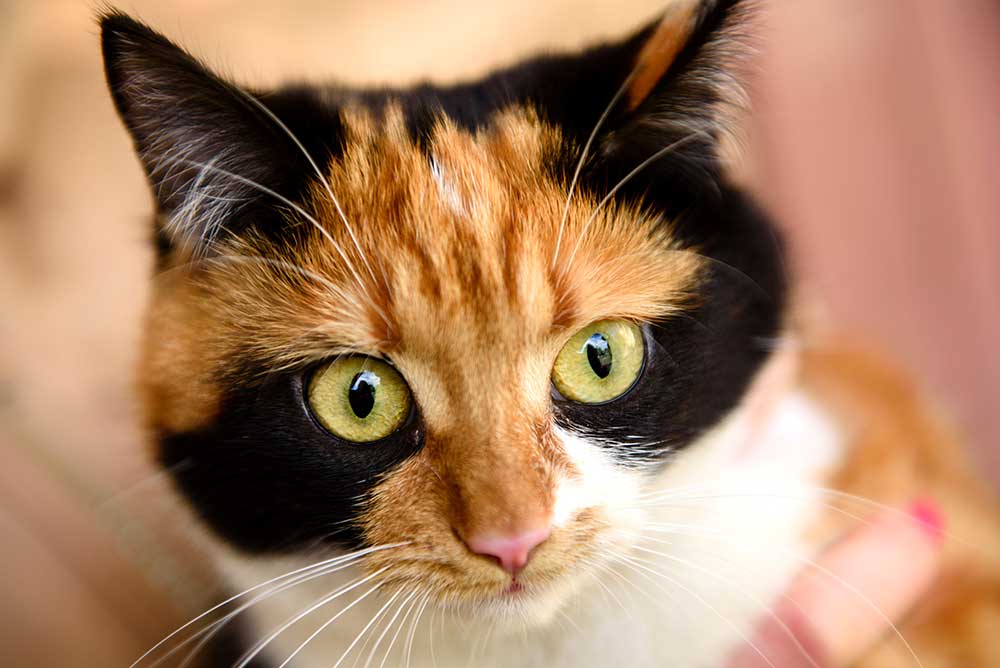 It’s not just the black and orange coloration (or any coat color) that makes the American Curl cat stand out as a district breed. The American Curl cat breed carries the dominant gene (Cu) that produces ears that are curled back at the tips. The genetic anomaly doesn’t cause any health problems for the cat—but no guarantees that their adorable looks won’t melt your heart!

The American shorthair is a friendly cat breed with a compact, muscular body. They descend from European cats and were brought to North America on ships alongside early settlers. They were prized for their hunting abilities and retain their active temperament.

Created by a spontaneous mutation, this medium-sized cat has fur unlike any other orange and black cat breed on this list. The American Wirehair cat has a unique coat that is brittle to the touch, with each hair being bent or hooked. Even this breed’s whiskers are bent, resulting in an appearance of a thicker coat. 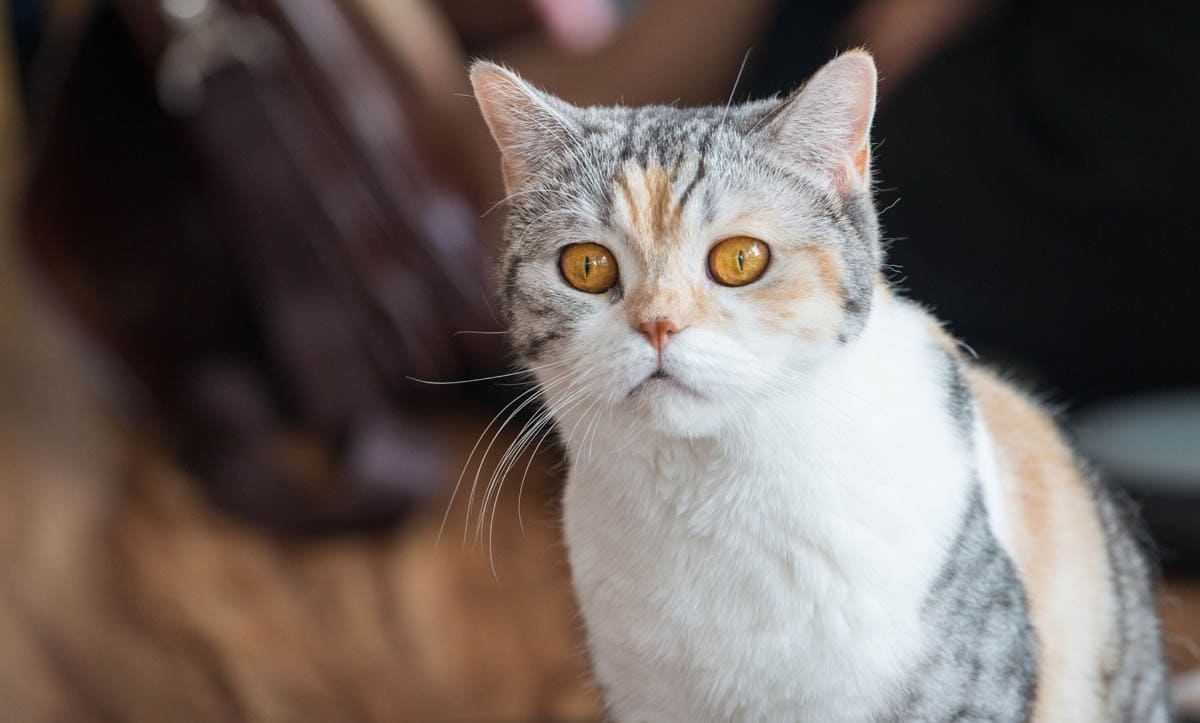 This laid-back breed has a plush coat that comes in all colors and patterns—including orange and black. As kittens British Shorthair are playful and they mellow out with age, making them a great addition to families.

Another spontaneous mutation, The Cornish Rex is a curly-coated domestic breed that comes in all colors and patterns. Their curly coat lacks guard hairs, making them one of the softest breeds of cats. 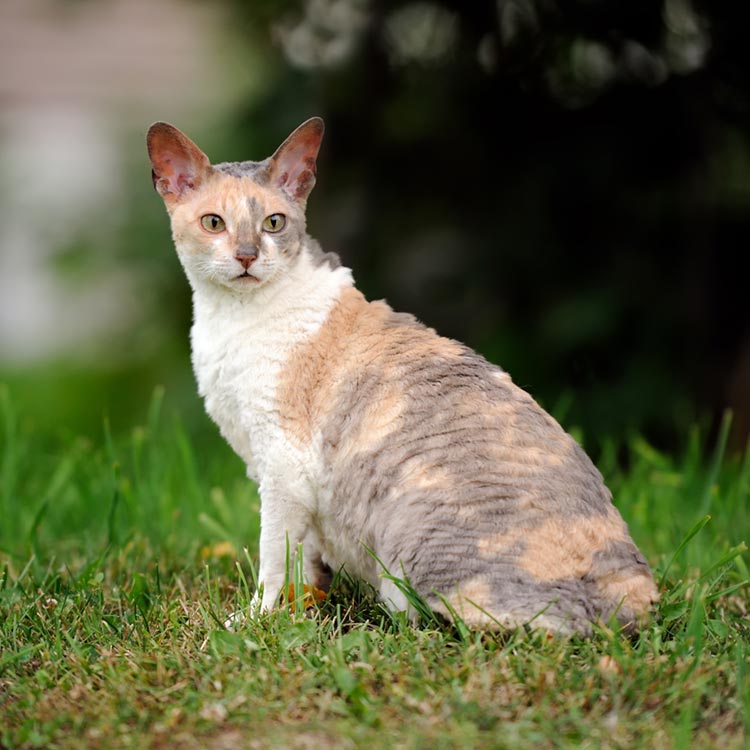 The Devon Rex cat breed is known to thrive on human companionship. They’re medium-sized cats with curls from their coat to their whiskers. The Devon Rex occurs in all coat colors and patterns including solid, bi-color, tri-color, mink, pointed (known as Si-Rex), and smoke. 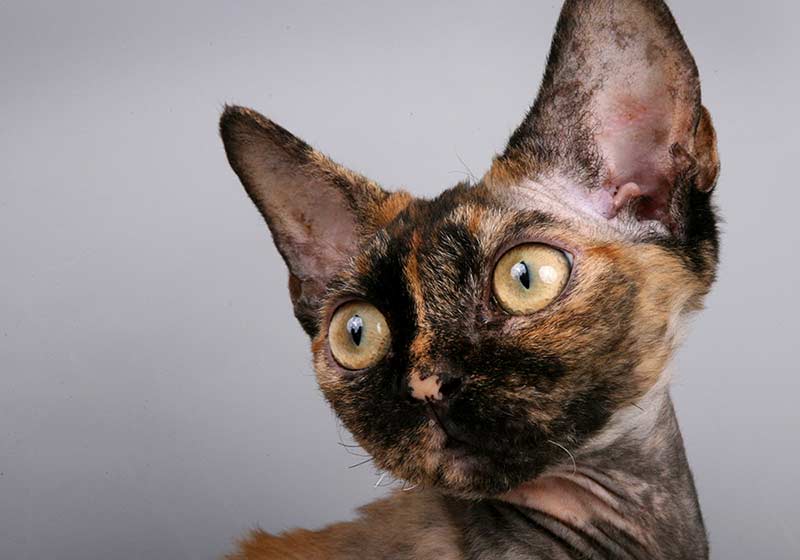 The cousin to the Persian cat breed, you’ll recognize Exotic shorthair cats by their flat, smooshy faces and a coat that comes in an array of patterns and colors. They have a calm disposition that makes this breed a perfect companion for other pets, families, and older individuals.

The oldest of the Rex breeds, the German Rex has velvet soft fur that comes in all colors and patterns. The German Rex is active, intelligent, and playful. They enjoy companionship, including from kids and other pets, and don’t do well if left for long periods on their own. 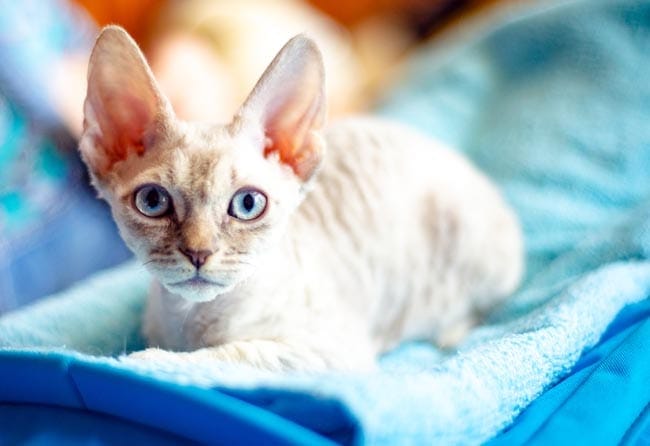 Maine Coon cats are one of the largest domestic cat breeds, weighing upwards of 20 pounds. They’re also one of the oldest domesticated cats in the U.S. and are the state cat of Maine. These gentle giants love to talk and aren’t afraid to tell you how much they adore human company. 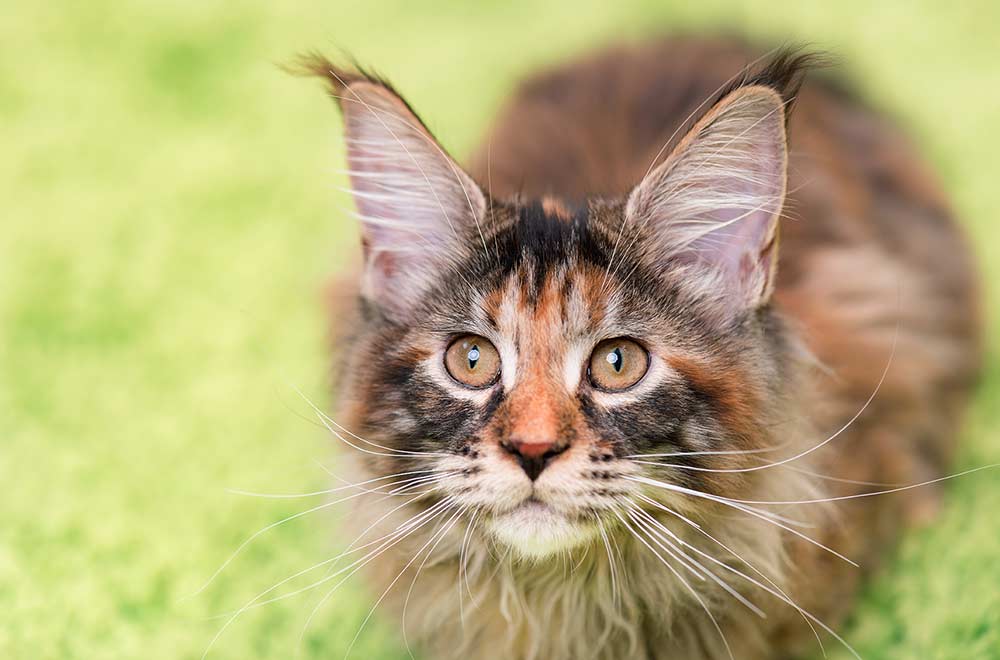 The Manx cat breed is known for their tail-less appearance, but their tail actually ranges from a stump to a full-grown tail. They’re intelligent and playful, and are often described as dog-like. Before adopting or purchasing your black and orange Manx cat, read up on Manx syndrome.

The Munchkin cat is a short-legged cat whose origins can be traced back to a small town in Louisiana. Adored for their short legs caused by a genetic mutation, the Munchkin cat is prone to health conditions like arthritis and the inability to groom. When welcoming a Munchkin cat into your family (orange and black or any color), you’ll be greeted by an energetic cat that seems to never outgrow their kitten tendencies.

The thick, dense fur of the Norwegian forest cat comes in all colors and patterns except dilute colors. They originated in Northern Europe where their thick fur kept them warm during harsh winters. Now in warmer temperatures, they molt once a year and require daily brushing. 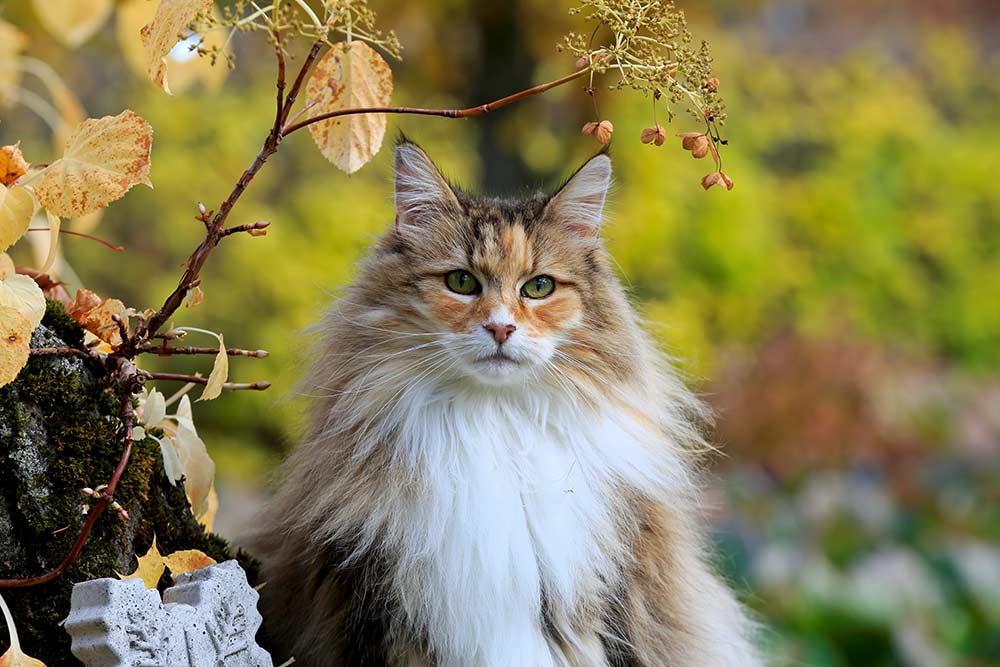 The Oriental cat breed was created by breeds wanting a non-pointed Siamese cat. The result was the outgoing Oriental cat whose coat comes in all colors and patterns but shares the similar lean and long body type of the Siamese. 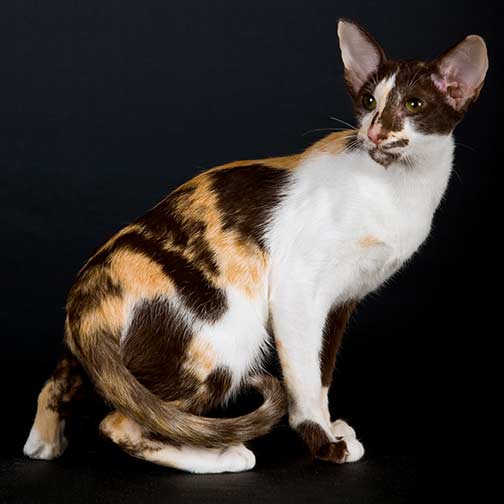 The Persian cat breed comes in all colors and patterns except pointed and shaded. They have coby bodies with flat faces and sweet expressions. Persian cats are a brachycephalic breed, which means they have a short, flat face, this can lead to problems such as excessive tearing of the eyes, dental problems, eye ulcers, and breathing difficulties.

The first Scottish Fold was named Suzie. She was a pure white cat who lived in Scotland—and was born with a random mutation that caused her ear tips to fold in. Since then, the Scottish Fold has become a popular breed, although controversial for their medical conditions. If you’re hoping to purchase or adopt an orange and black, or any color, Scottish Fold, read up on Osteodystrophy or osteochondrodysplasia, a  condition that affects cartilage throughout the body, including bone lesions, thickening of the tail, and bones in the hind legs becoming thickened and arthritic.

The Siberia is a slow-maturating cat (up to five years) that comes in all coat colors and patterns. Their most distinctive feature is their thick, moderate to long-haired coat, which becomes even thicker during the winter months. They have an abundant ruff around the neck, framing their large head and face. While they’re muscular and large, they are known to be a loving and affectionate breed.

A cat doesn’t need a thick coat of hair to flaunt colors and patterns, and the Sphynx cat breed proves this. The Sphynx cat is almost entirely hairless, with soft down hairs that give this feline a delightful chamois feel. Their skin is pigmented, so while they don’t have mounds of fur, they’re still as stunning as their other orange and black feline counterparts. 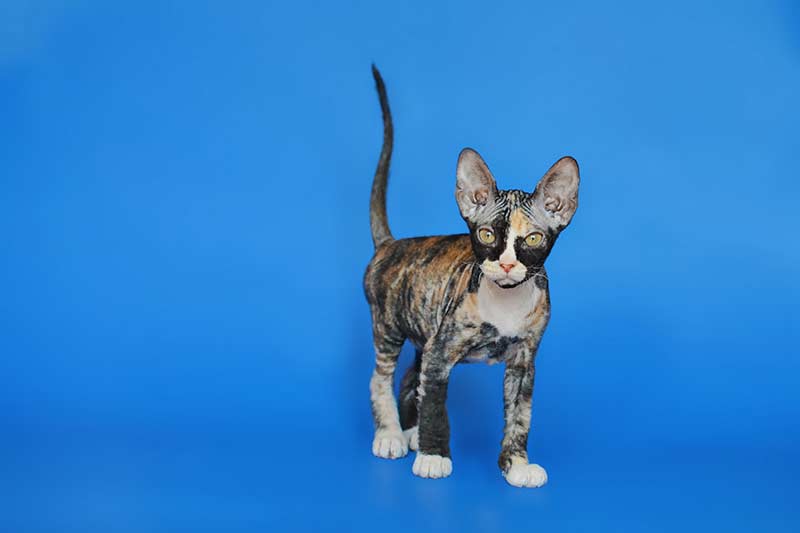