The Norwegian forest cat is a large cat that originated in Northern Europe. The long coat is adapted to keep these cats warm in the freezing Northern Hemisphere winters. 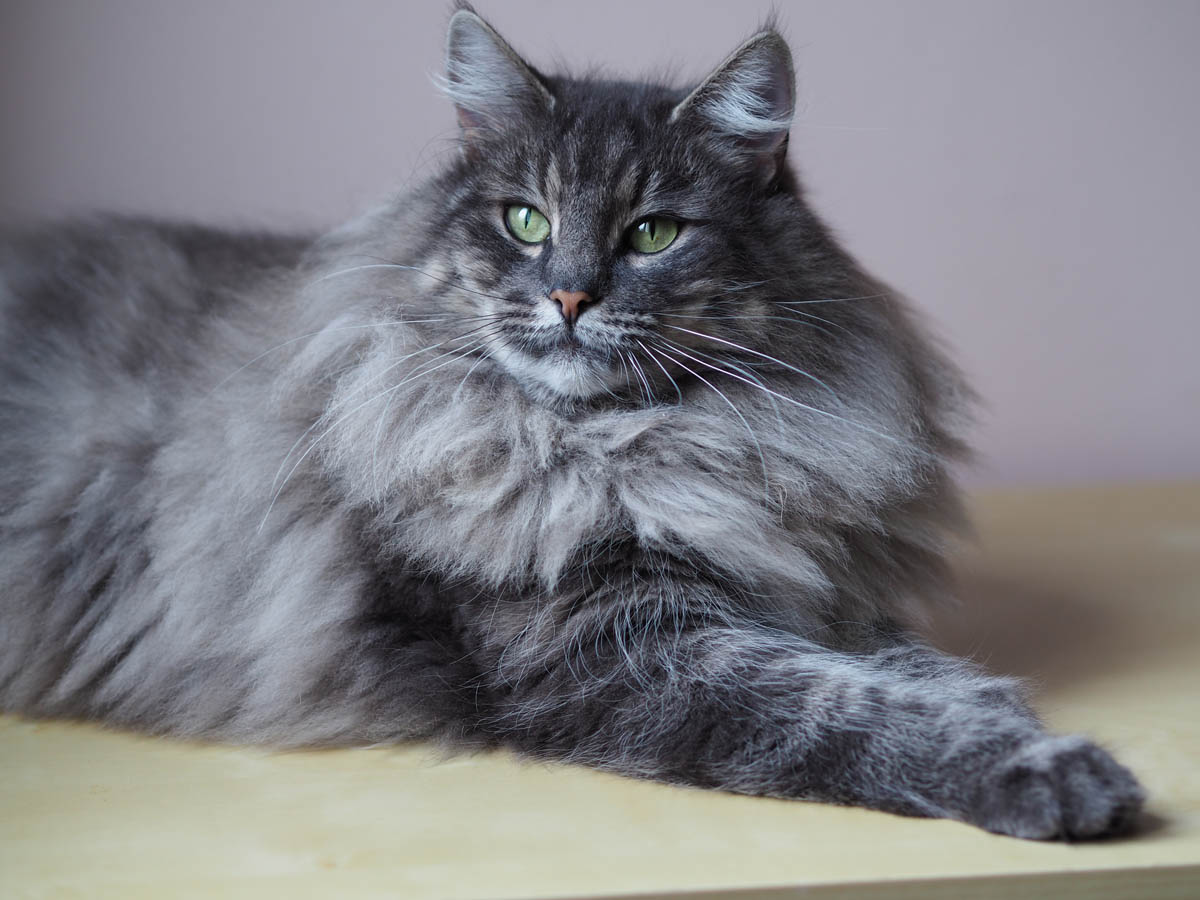 Affectionately known as the Wegie (pronounced wee-gee, like Bee Gee), the Norwegian forest cat is a large heavy boned cat with a long, double coat. Known locally as the Norsk Skaukatt or Norsk Skogkatt (which means Norwegian forest cat), the breed is a naturally occurring cat. The exact history of the Norwegian forest isn’t known for sure but records indicate that these longhaired cats have been present in Norway for thousands of years.

It has to be assumed that longhaired cats are descendants of cats brought to Norway by the Vikings via various trade routes.  Turkish angoras and Siberians are likely candidates for these founding cats; all have similarities to the Norwegian forest cat.

Once there and living in the wild,  they adapted by growing larger and developing a water-resistant thick coat to help them survive the harsh climate. A relationship may have formed with local farmers who utilised the Norwegian forest cat for their hunting skills.

Not much was said about the breed until in the 1930s when the cat fancy began to take off and a small number of Norwegian forest cats were shown in Germany.

Crossbreeding with shorthaired cats almost wiped out the Norwegian Forest cat and efforts were made to save the breed, and in 1938, the Norwegian Forest Cat Club was established. However, WWII broke out, and breeding programmes pretty much ground to a halt during this time.

Breeding resumed in earnest in the 1970s and the Norwegian forest cat gained official recognition with the international cat bodies in 1977. The first breeding pair arrived in the United States in 1979. In the 1970s, a cat by the name of Pan’s Truls was to become the benchmark of the Norwegian Forest Cat breed standard. FiFE officially recognised the breed in 1977 and the Cat Fanciers Association in 1987, receiving championship status in 1993.

The Norwegian forest cat was declared the Official Cat of Norway by the late King Olaf.

The Norwegian forest cat is solid, well-muscled with a broad chest, great depth to the flanks and substantial bone structure, these cats have a powerful appearance. The legs are medium, and the hind legs are longer than the front legs, which makes the rump higher than the shoulders. The thighs are well-muscled, and when viewed from the rear, the hind legs are straight. The paws are large and round with heavy tufting between the toes. When viewed from the front, the paws appear to toe out. The Norwegian cat has a long bushy tail that should reach the shoulder blades and preferably the neck.

Males are larger than females. An adult can weigh between 6 – 10 kg (13 – 22 pounds). They are a slow-growing breed and do not reach their adult size until five years of age.

The head is an equilateral triangle where all sides are equal in length. The nose is straight, and the are eyes almond-shaped.  Ears are broad at the base and set high, long tufts growing out of the ears are desirable. Overall, the face has a sweet expression.

The double coat is semi-long, thick and waterproof. It has a dense, woolly undercoat and smooth guard hairs. Males tend to have a thicker coat than females.

Top guard hairs are long, glossy and water-resistant, with a dense undercoat. The bib around the neck consists of three sections, with a short collar at the neck, side button chops and a frontal ruff. The hind legs have full britches.

The Norwegian forest cat comes in almost every colour and pattern except for colour point and the dilute colours chocolate and lilac.

The Norwegian forest cat is an easygoing, sweet, mild-mannered and people-loving cat. An active and playful breed, the Norwegian forest cat retains their kitten-like behaviour well into adulthood. They are natural athletes with  excellent climbing abilities; they love to be up high, so it is essential to provide them with cat trees or high perches.

They are incredibly intelligent, make ideal family pets and get along well with children. Wegies can be reserved around strangers, but are affectionate with their human family but less of a lap cat than other breeds. Norwegian forest cats don’t play favourites, they love everyone in the family.

Animals with a double coat have a big moult once a year, so be prepared. Five minutes of daily grooming will go a long way in keeping the coat in good condition.

All cats need to have their teeth looked after either by regular brushing with a cat toothbrush or by giving him raw chunks of steak or chicken necks.

Once weaned, kittens should be fed premium kitten food, and slowly transitioned to adult cat food as they mature.

As with all breeds of cats, some are more prone to developing certain conditions than others including inherited diseases. The Norwegian forest cat is one of the healthiest breeds of cat, as with any, can have an increased incidence of certain diseases. Always ask the breeder if he or she DNA tests their breeding cats.

Which is larger the Norwegian forest cat or the Maine coon?

Both cats are large, the Maine coon is generally accepted as the largest domestic cat breed, with the Norwegian forest cat and Siberian a close second and third.

What is the difference between the Norwegian forest cat and the Maine coon?

Both the NFC and the Maine Coon are large-breeds with long coats. The Norwegian has a triangular-shaped head, a straight nose and a flat forehead. The Maine Coon’s head is wedge-shaped with a wide muzzle and high cheekbones. Both cats have ear tufts, the Maine Coon’s are significantly longer.

How long does the Norwegian forest cat live?

The average lifespan of the Norwegian Forest Cat is 12-15 years.

How can you tell if your cat is a Norwegian forest cat?

If you have purchased your cat from a registered breeder, you should be provided pedigree papers. The only other way to prove you have a purebred is a DNA test.

Is the Norwegian forest cat hypoallergenic?

The Norwegian forest cat is not hypoallergenic. Purina has announced that LiveClear is the first-ever cat diet to help manage allergies in people. The responsible allergen, Fel d1 which is found in cat saliva can be counteracted by an egg-based ingredient in the new diet which may reduce allergens in up to 47% of people.

How much does a Norwegian forest cat cost?

The cost can range from $1,000 to $3,000 depending on if the cat is a pet or show quality cat. Pet quality means the cat may have some minor flaw such as a tail kink or incorrect eye colour, compared to a show-quality who meets the breed standards.

Can Norwegian forest cats go outside?

It is preferable that your Norwegian forest cat stays indoors or have access to a safe outside cat enclosure to reduce the risk of disease or trauma from a cat accident or dog attack. This also keeps wildlife safe as Norwegian forest cats are exceptional hunters.

Yes, they are one of the few breeds who like water.