Who can resist a brown cat? Even more so if you are a chocolate lover! Let’s take a closer look at these brown beauties. Here are 11 brown cat breeds you will fawn over:

If you’re looking for a trusting friend, the Burmese just might be your kitty! They are known to be very affectionate and even follow their owners around the house to be with them. They are good with kids—and perhaps even the occasional dog. The Burmese is a quiet and intelligent cat. Once their large expressive eyes have gained your attention, the Burmese will have you right where they want you. Your lap won’t be empty for long with a Burmese in the house. The unique, solid-colored, sable coat of the Burmese was developed through selective breeding. Their short hair requires very little grooming.

The British Shorthair is easily the healthiest of the brown cat breeds as they have no breed-specific health issues. They are sturdy, adaptable, and are believed to date back to the native cats of Rome. Although very laid back and affectionate toward their humans, British Shorthairs generally do not like to be picked up. That’s okay—they are a medium-to-large sized cat, and males can weigh up to 17 pounds. They sometimes appear less than graceful, but they are adept natural hunters with abundant physical strength. They are known to live well with children and most other pets, including rabbits and birds!

Perhaps the Havana Brown’s most endearing feature is the way they extend a paw with a gentle touch toward their humans. There is no doubt as to their sensitive, affectionate nature. They not only desire, but need, human interaction. The Havana is distinguished by its unique muzzle shape, rich chocolate color, and matching whiskers. Their short coat needs minimal grooming, and has been said to feel like mink. As you look into their oval green eyes, you will see both intelligence and mischief. The Havana is an outgoing, talkative, and playful cat that gets along with everyone.

Being that there are no breeders or registered York Chocolate cats in the world today, the breed is considered ‘extinct.’ There are, however, possible ancestors who are simply not acknowledged as such. Should you find one, you will have an affectionate, easy-going, and loyal companion, who may even greet you at the door. York Chocolates are a breed that will follow their humans around the house, and perhaps even to the pool! They have the unique distinction of liking water.

They are intelligent and athletic—the traits of a skilled hunter. They require lots of playtime with family members. Their deep brown, almost black, semi-long hair is resistant to matting, however, regular grooming is recommended.

There is one word for this breed:  pixie. They are playful, mischievous, and intelligent—a dangerous combination should you leave your dinner plate within their reach. The Devon is known as a ‘food hound.’ Be careful they don’t sway you with their ‘I’m starving’ look.

A long skinny neck and huge ears give the Devon a completely distinct look—some would venture to say silly, in order to match their personalities. But they are loyal, affectionate, and happy to help with whatever you’re doing. You may even find one perching on your shoulder to manage your affairs.

Devons are very talkative and get along particularly well with children. Contrary to popular belief, they are not hypoallergenic, but they are low maintenance.

That cat hamming it up on the television with the long flowing white coat is most likely a Persian. Their cute ‘pansy-like faces’ and large expressive eyes make for an adorable look.

Persians are generally quiet with soft pleasant voices, but they are very responsive to their humans and make wonderful companions. Although they prefer a calm household, they are very adaptable. They are sweet and gentle with everyone in the household.

Persians are relatively short with wide bodies. They are, therefore, not fond of jumping and climbing. The Himalayan is the most popular of the Persians.

The Oriental Shorthair combines curiosity with intelligence to become the bloodhound of cats! They have been known to open drawers and cabinets in search of their favorite toy. This feline always has their nose into whatever you are doing, especially should you open the refrigerator.

They are feisty, yet loyal to a fault. An Oriental Shorthair might greet you at the door when you come home, and do so quite loudly if you are late. A constantly running motor and a penchant for warm laps will most likely yield a Shorthair the affection and attention they crave from their human.

If you’re looking for a companion who is both active and a lap cat, a Tonkinese might fit the bill. They are fun loving and affectionate—and they can be very entertaining. The Tonk loves playing and climbing, so interaction with a human companion of any age is critical to their well-being.

The Tonkinese can also be quite talkative, and they expect their humans to not only listen, but to also respond. They are curious and will get into anything their human is into. As with most intelligent creatures, the Tonk can be mischievous if they are bored or ignored. on

Weighing in at up to 30 pounds, the Chausie was developed by crossing jungle cats from Southeast Asia with domesticated Abyssinian cats. They are strong and energetic, and have been known to jump six feet straight up into the air from a standing position. The Chausie eats only an all-meat diet, as they are unable to digest plants or grains.

Despite their seemingly wild appearance and independent nature, Chausies are friendly and family-oriented. Although they do very well with other cats, Chausies are not recommended with small children or small pets that could be looked upon as prey.

Chaucies love walking on a leash or just being outdoors with their humans. 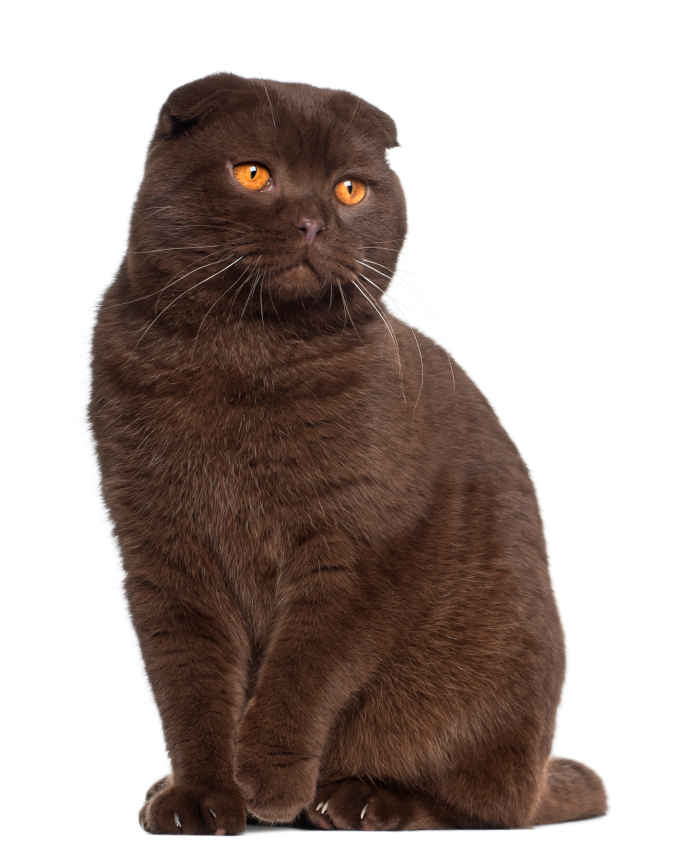 Although the Scottish Fold might sit up like one, they are not a prairie dog! Some folks have also said their rounded physique, big eyes, and flattened ears reckon them to owls. No worries. The Scottish Fold is 100 percent feline. Intelligent and inquisitive, the Fold is not shy. They can be trained to play fetch and get along well with children. They love and are loyal to their humans, even to the point of following them around the house. The Scottish Fold has been known to exhibit the odd habit of eating and drinking with their paws. They especially like running water.

The tabby cat is not a breed, but rather a coat pattern that includes stripes, swirls, and spots, with stripes being the most prominent. These markings can appear over the cat’s entire body or on individual sections of fur. The clincher for claiming the tabby moniker is the unique M marking on the tabby’s forehead (which can also be seen on some jungle cats). A tabby may also have darkly lined eyes, pencil lines on their face, and banding on their legs and tail.

Since tabbies can come from any breed, it is difficult to attribute to them any common personality traits.

What is a brown and white cat called? A cat with tan to almost black stripes on a cream or white body is called a Brown Tabby.

Why are brown cats rare? A cat’s hair color is determined by specific proportions of the components in melanin, which are inherited from the cat’s parents. The particular genes needed to yield brown cats are rare.