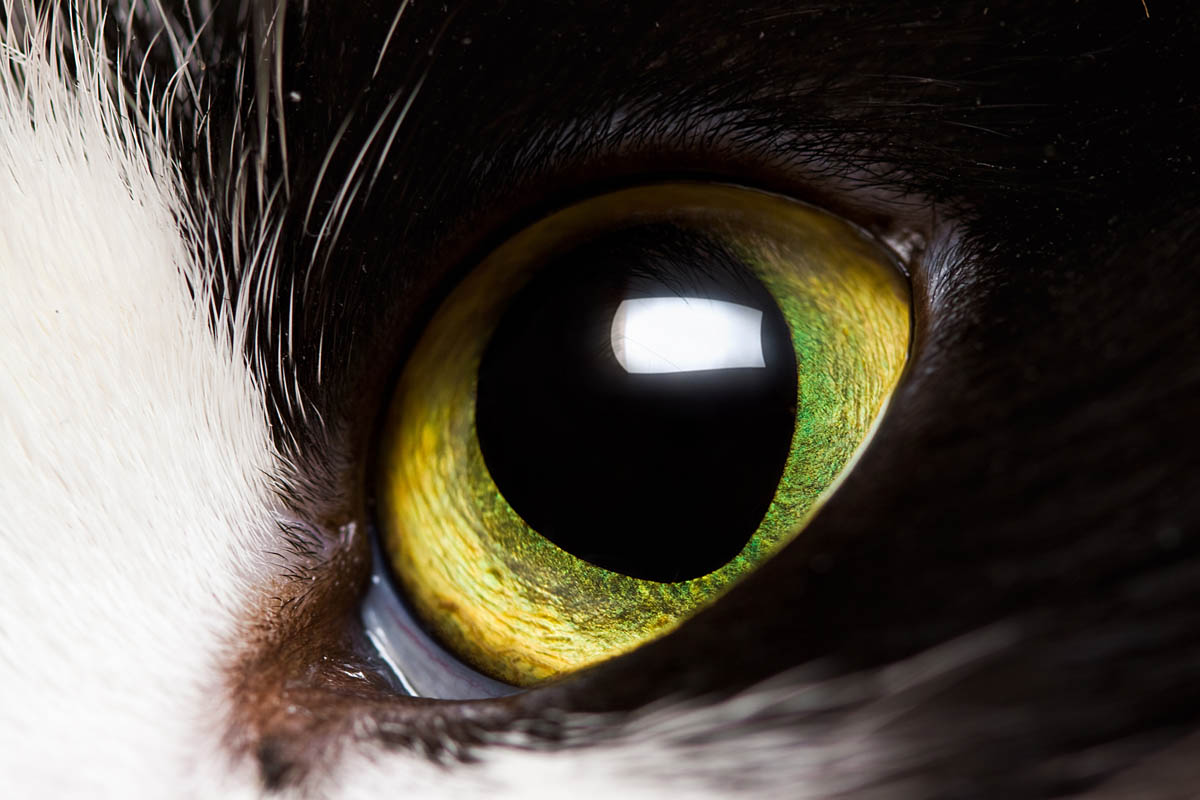 The senses consist of sight, hearing, smell and touch all of which combine to give your cat a window to the outside world. The eyes of the cat have evolved as that of a nocturnal predator. The eyes of the cat are large in relation to the skull and provide him with a wider field of vision than that of humans (295 degrees compared to our 210 degrees). This helps the cat judge distance, which is essential for hunting prey. Cats have two features that help them see in very low light.

Tapetum lucidum (which means shining layer) is a specialised layer of flat cells found beneath the retina. These mirror-like cells allow light to bounce off them and back onto the retina. When a bright light is shone into a cat’s eyes, you will see the familiar glow of the light bouncing off the tapetum lucidum (see pictures below). 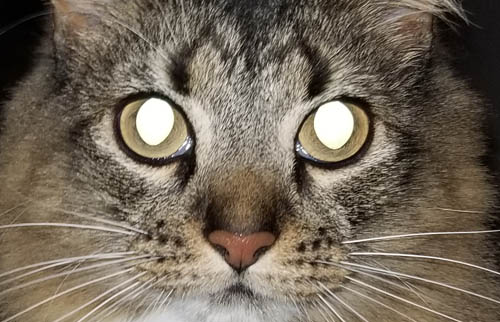 The shape of the pupils can change from a vertical slit to a large circle. This helps to control the amount of light reaching the retina, which contains light-sensitive rods and cones which transmit information via the optic nerve to the brain.

Elliptical pupils can increase to a greater size than round-shaped pupils. The larger the pupil, the more light enters the eye, helping the cat to see better in low light. 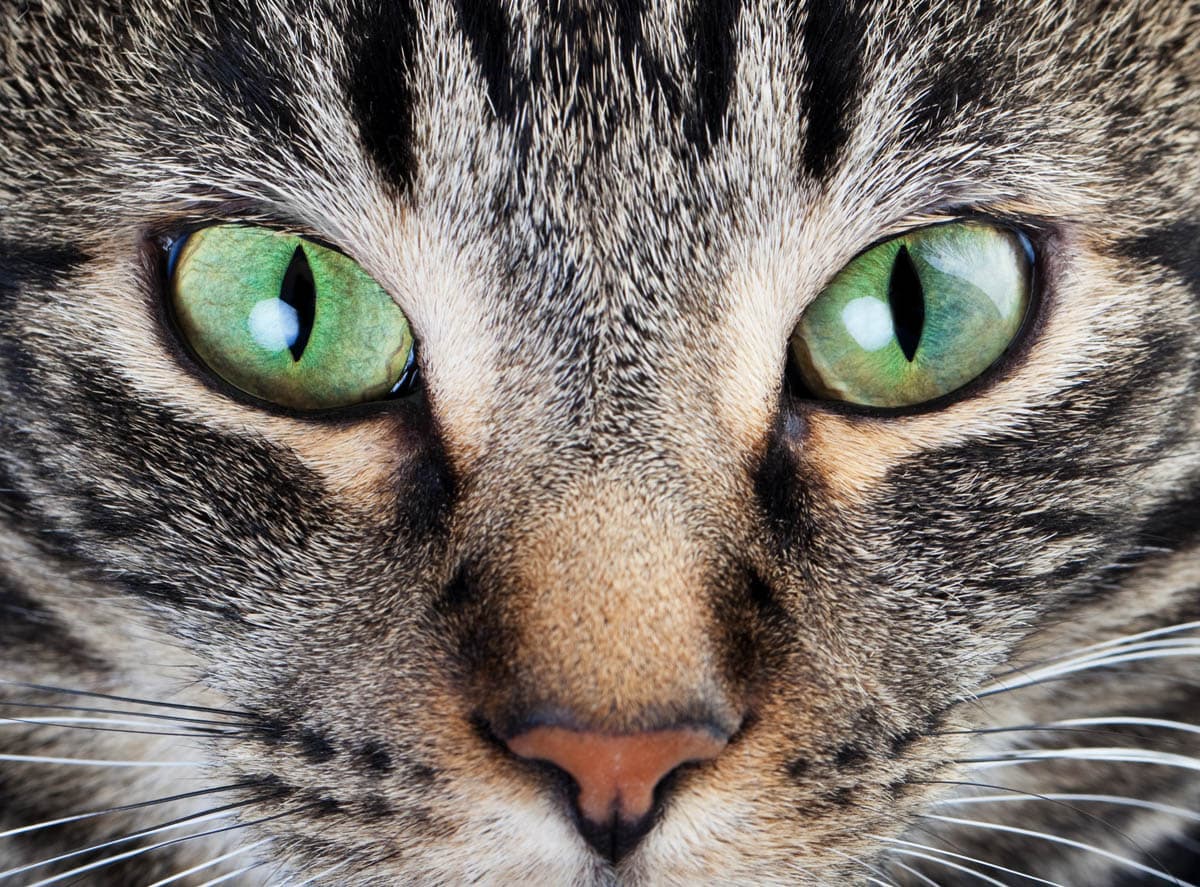 Cats do not see colour in the same way that we do. They can see some colours and can distinguish between certain colours such as red and blue.

Structure of the cat eye

How do cat eyes work?

The cat’s eyes work in the same way that human eyes work.

Light rays reflect off an object and enter the eye through the cornea, which bends (refracts) light in such a way that they pass through the pupil and through the lens, which changes shape to further bend the rays and focus them on the photosensitive rods and cones located in the retina at the back of the eye. The rods and cones convert the light into electrical impulses which are sent to the brain to produce an image via the optic nerve.

The eyes (along with other visual cues such as the ears and tail) can also give an insight into the mood of your cat.

Do cats experience a decline in vision with age?

Yes, a cat’s vision can decline as it ages, but they do not suffer from refractive errors (long or short-sighted) as humans do. The most common cause of vision loss in cats is due to cataracts. 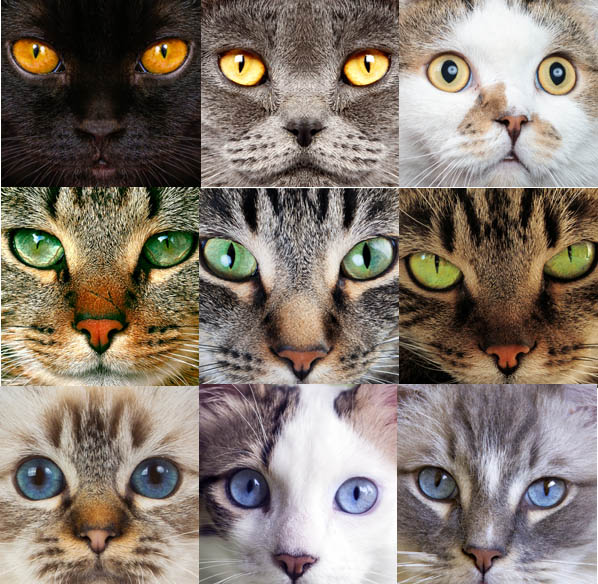 The eyes come in several colours in cats which includes blue, green, orange, brown and yellow. The darker the eye colour, the more melanin is present in the iris. Some cats have odd coloured eyes such as one blue, one yellow which is known as heterochromia.

All kittens are born with blue eyes; they change colour between 4-10 weeks as melanin granules accumulate in the irises.

What is the rarest eye colour in cats? 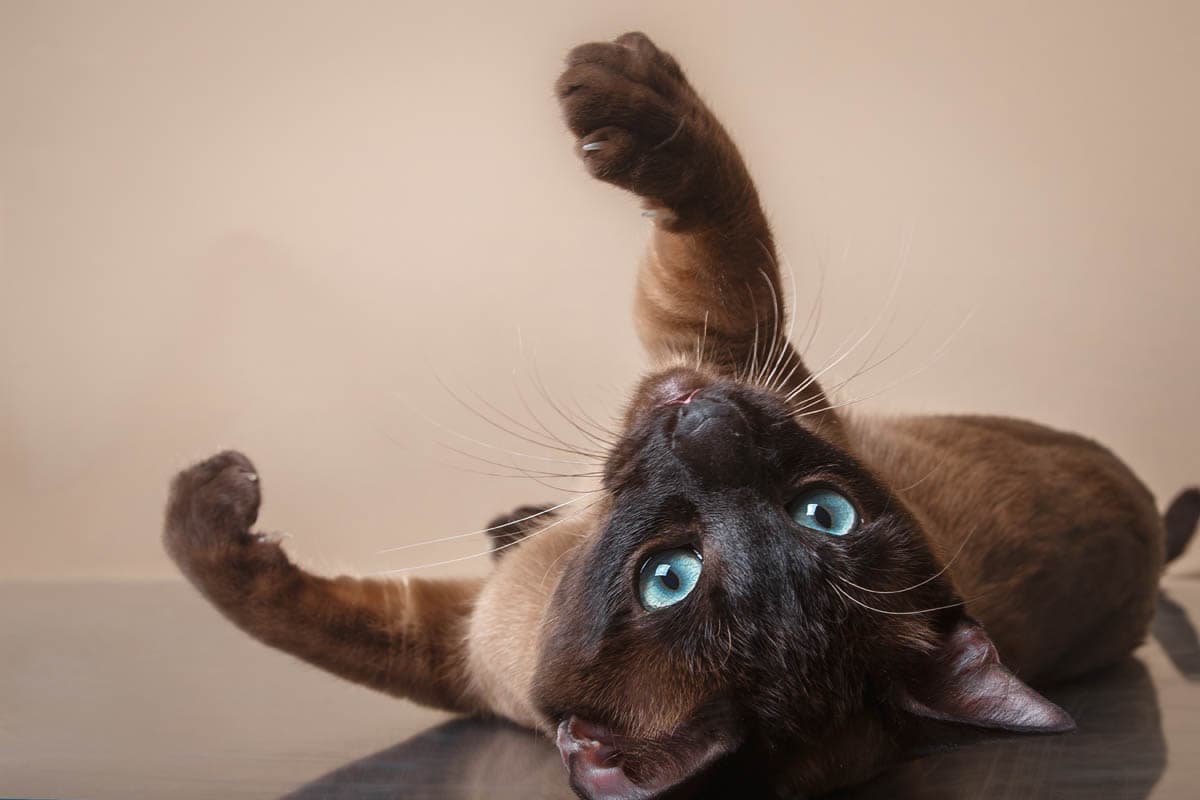 Aqua is an unusual eye colour that occurs most commonly in Tonkinese and Snow Bengal cats. It has a blue-green hue.

There are many disorders that can affect cats, too many to list here, the most common include:

The following conditions can cause blindness:

Symptoms can vary depending on the condition, but be alert for the following:

Aside from the above, which occurs in all newborn kittens, some cats will be born blind; others will become blind at a later stage in life either through disease or trauma. Blind cats can and do go on to live a full and happy life. More information on blindness in cats can be found here.

Can cats control their pupils?

Can cats move their eyes?

Yes, just like humans, cats can move their eyes from side to side and up and down. This range of motion is limited.

How are cat eyes different from human eyes?

The eyes of the cat differ from human eyes in several ways.

The light-sensitive tissue at the back of the eye contains rods and cones which respond to light and colour. Cats have 6-8 more rod cells than cones, which gives them excellent night vision, but they are not able to see colours as well as we can.

The cat’s pupils dilate to approximately 80% of the visible portion of the eye, compared to that of the human which dilates to 30%.

Why should you never stare into a cat’s eyes?

Staring is a sign of aggression and intimidation to cats, if you have ever watched two cats fighting, you may have seen both cats staring into each other’s eyes. People who don’t like cats will avoid eye contact, which is seen as non-threatening to cats, which is why they will often seek out the one person who doesn’t like them.