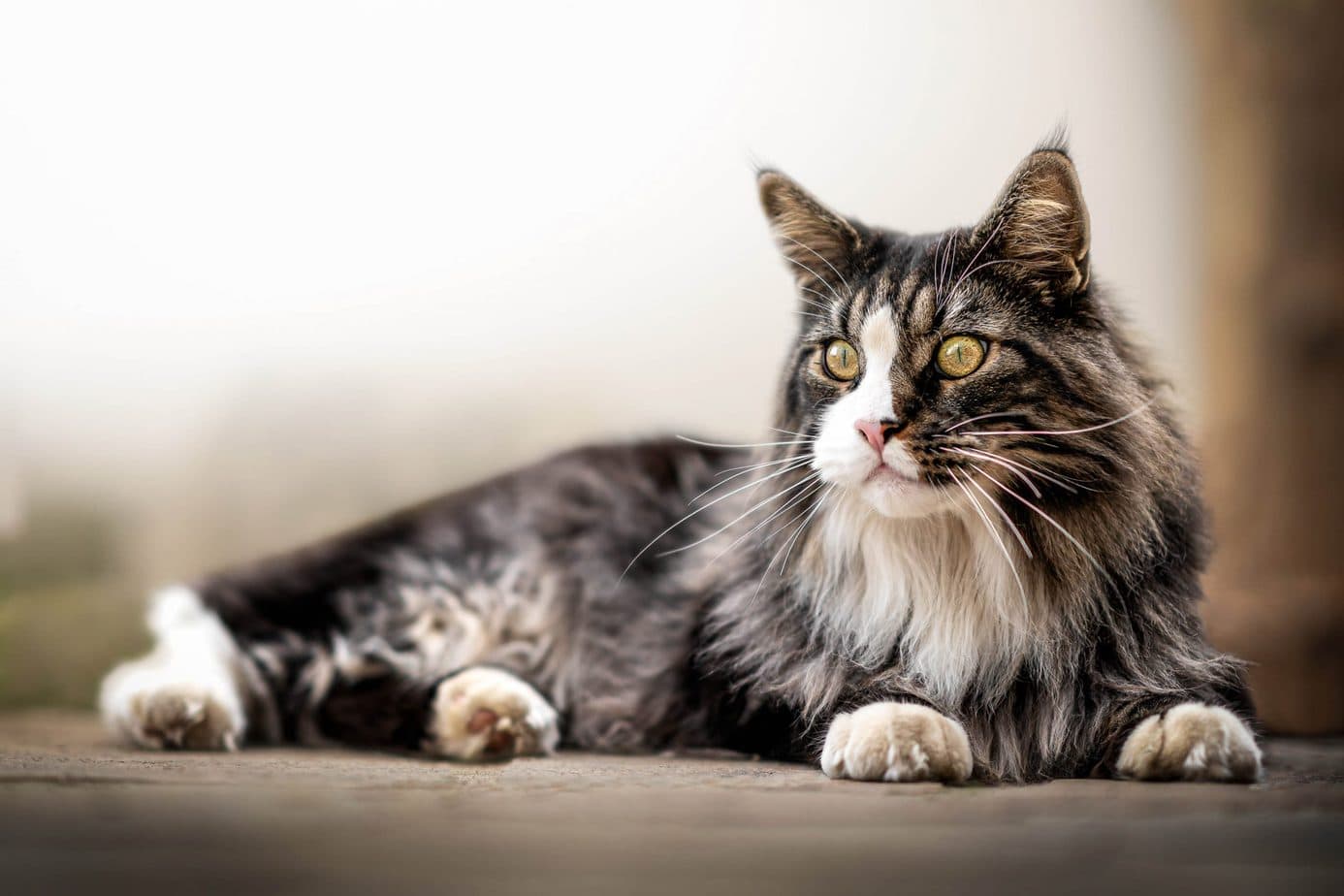 Table of Contents hide
1 At a glance
2 About
3 History
4 Did you know?
5 Appearance
6 Coat colours and patterns
7 Temperament
8 Health
9 Buying a purebred cat
10 Care
11 Suitable for?
12 Frequently asked questions 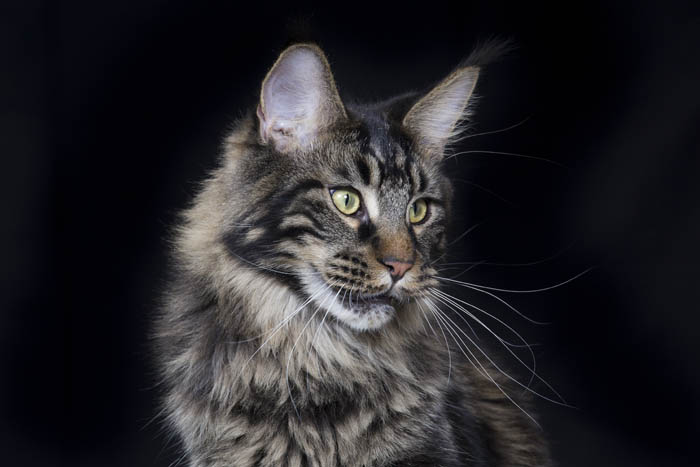 Maine Coons are known for their luxuriously long coat, ear furnishings, and powerful body. Despite its size, the Maine Coon is considered to be a gentle giant who is gentle, loyal and intelligent.

Maine Coons were first exhibited at the local Skowhegan Fair held by New England farmers in the early 1860s. Twelve Maine Coons were shown at the Boston Cat Show in 1878. The first national cat show was in 1895 at Madison Square Garden where a female Maine Coon by the name of Cosey won Best in Show. During the first half of the 1900s, the breed dropped out of favour, with the arrival of Persian cats from England taking the spotlight. The Cat Fanciers Association declared the Maine Coon extinct in 1959 claiming that the breed had failed to adapt to warmer climates.

Resurrection of the Maine Coon:

However, during this time, the breed continued in the background as pets. Mrs Ethelyn Whittemore of Augusta, Maine has continued to breed Maine Coons keeping records of parents and their litters. The breed was resurrected in the 1950s using many of the Whittemore cats, and the Central Maine Cat Club (CMCC) was formed in 1953 by Alta Smith and Ruby Dyer. The Maine Coon was accepted with the Cat Fanciers Association (CFA) in 1975 and was awarded Championship status with them on 1st May, 1975. Eventually, interest in the Maine Coon started to spread abroad with the first Maine Coon was sent to Britain in 1983. 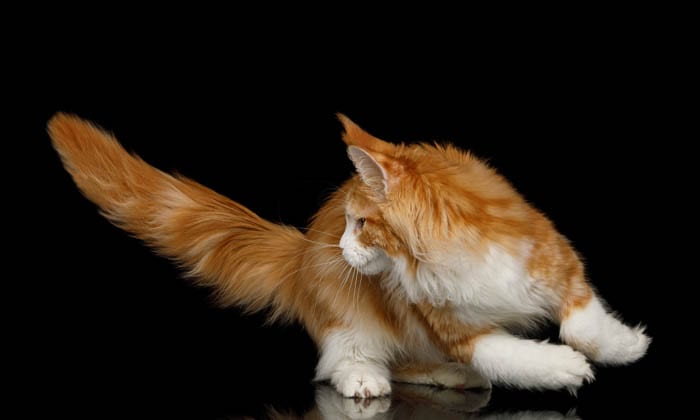 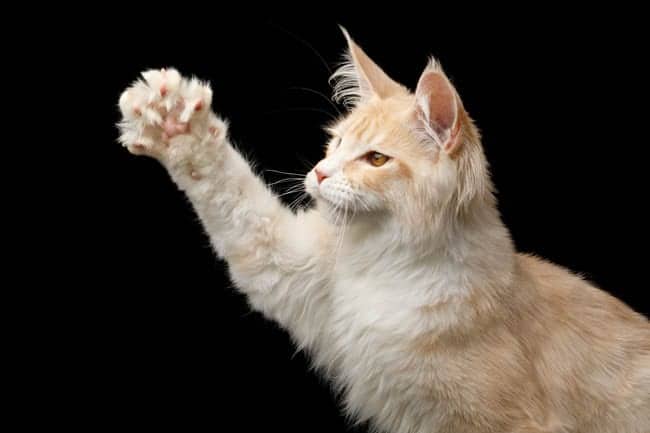 The head is broad and is slightly longer than it is wide, the cheekbones are set high. The muzzle and chin are square, strong and blunt.

Maine Coons have large ears which are wide at the base, tapering to a pointed tip with their distinctive ear furnishings inside and the lynx tips on the top of the ears, which give them their wild look. 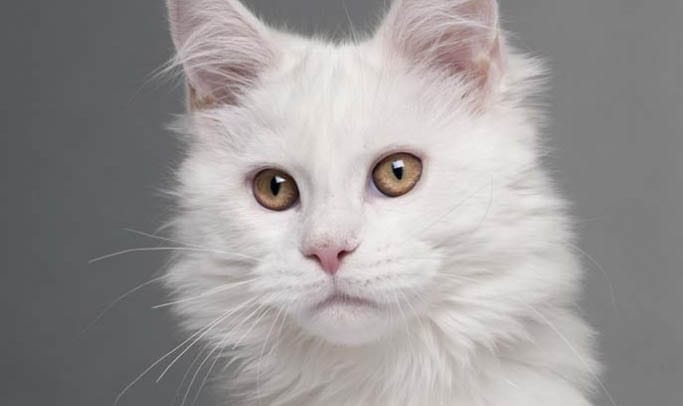 The eyes are large, wide-set, and oval-shaped and beautifully expressive. Eye colour can be copper, yellow, green, blue and odd-eyes.

Maine Coons are the largest domestic cat breed with a long, strong, broad and muscular body.

The legs are muscular and well proportioned. Front legs are set wide apart and the upper hind legs have a covering of long fur known as britches. Feet and toe feathering or furnishings were also needed to enable them to run through the snow, and icy waters and these keep the paw pads from getting too cold. Paws are large and round.

The tail is long, broad at the base, tapering to the tip, is thick and bushy.

They have a solid and rugged appearance, which is a reminder of their working cat history. Maine Coons don’t reach their full size until they are between 3 to 5 years of age.

Their semi-longhaired coat is of varying lengths to survive in the harsh North American winters. It is shorter around the head and shoulders, with a ruff around the neck and chest. This coat is very water-resistant and quite soft to the touch. A plumed tail finishes off this wonderful coat. 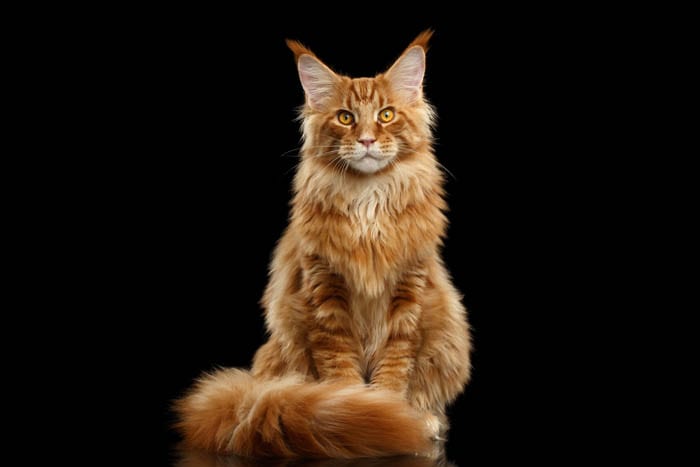 Their intelligence makes them easy to train. High activity levels through to couch potatoes are ways of describing the day of a Maine Coon. Maine Coons love to climb and be up high, so heavy-based scratching poles are a necessity. Water is also a favourite, to drink, play in or in some cases swim in. You will never be safe in the bath or shower if you share your home with a Maine Coon.

Maine Coons thrive on human companionship and will follow you around the house and like to be a part of what you are doing. Some can be talkative, their voice is more a high-pitched trill than a meow and can be used in various tones depending on how they want to talk to us. 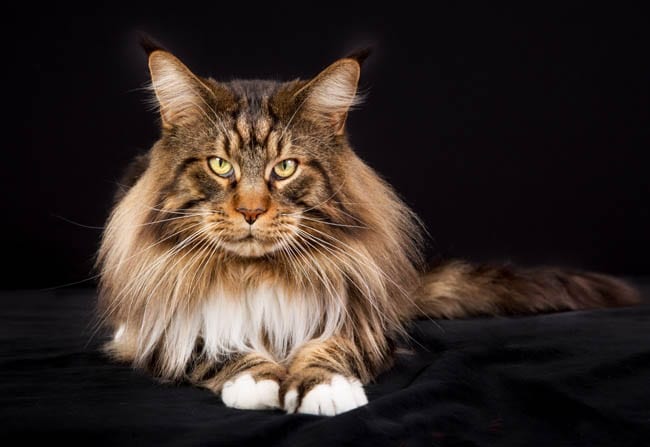 All in all, the Maine Coon is a healthy cat, although some Maine Coons can be prone to the following health problems.

Ask breeders about these conditions and if their cats have been tested for ones which can be tested for. Responsible breeders recognise potential inherited diseases and will take steps to test, and if necessary, remove breeding cats from the pool if they are at risk of passing on inherited conditions.

Purebred cats should only be purchased from a registered cat breeder. This means they are registered with a relevant cat council such as the Cat Fanciers Association (CFA) or The International Cat Association (TICA) which can be verified. Registered breeders must abide by the council’s code of ethics, and all cats are registered purebred Maine Coons. If possible, ask for references from people who have purchased a Maine Coon from the breeder.

Kittens should not leave the breeder until they are at least 12 weeks old. They need this time with their mother and siblings to learn socialisation and wait until they have had at least two of their vaccinations.

If you would like to show the cat, let the breeder know. Many breeders sell pet-quality purebred cats, which means they don’t fit the breed standard perfectly and is almost always due to a minor flaw such as a kinked tail or a minor fault in their colour and doesn’t reflect the health or personality of the cat. Show quality cats should be just that but usually come at a higher cost.

Always get guarantees in writing and always leave a paper trail. 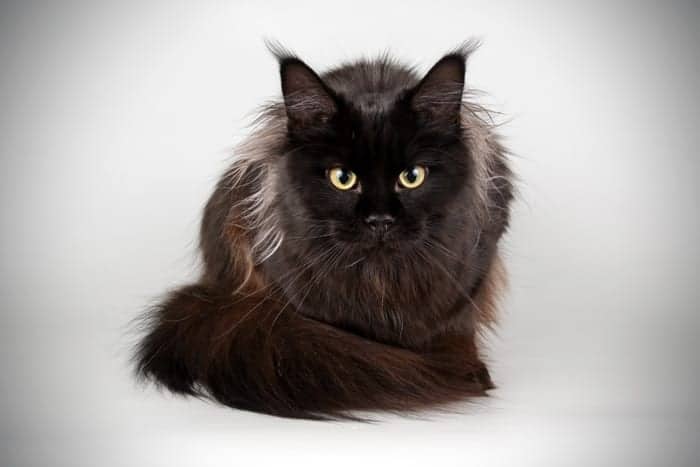 The coat of the Maine Coon is silken but not as thick as other longhaired breeds; but benefits from a daily groom to get rid of loose hairs, it only takes 5-10 minutes and will keep it tangle-free and beautiful. Most cats do not need a bath.

Dental care is important, particularly as Maine Coons can develop periodontal disease from an early age. 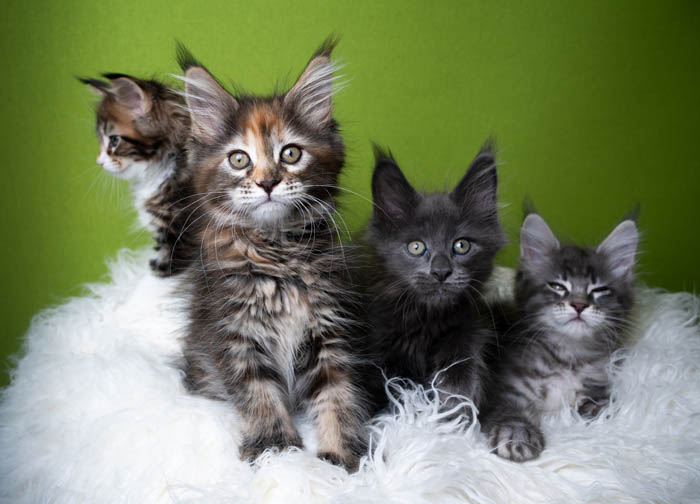 Maine Coons are very adaptable and will be happy with single-person homes or in families, with or without other animals, providing the animals are accepting of cats.

They do like company whether it be human or another cat or dog, and even though they are a large cat, they can happily live in apartments as well as they can in family homes as long as they are provided with an enriching environment. If you are out for long periods, consider two cats.

The Maine Coon makes a great pet due to their easygoing and gentle nature.

Do Maine Coons shed a lot?

The Maine Coon sheds as much as any other breed, and have one or two big moults a year. Groom once a day for five minutes to keep shedding to a minimum.

How are Maine Coon cats different?

The most prominent difference between the Maine Coon and other cat breeds is its imposing size. Other noteworthy features include the neck ruff (mane), britches, ear tufts and hair between the toes.

When does the Maine Coon get its ear tufts?

The ear tufts are usually present within a few weeks of birth.

The Maine Coon isn’t overly loud, but they can be quite talkative and are known to chirp and trill.

How much does a Maine Coon cost?

A Maine Coon can cost between $1,000 – $2,000. Factors which determine the price include if the cat is a pet or show-quality and if you intend to breed from the cat. A pet quality Maine Coon costs less.

How can I tell if my Maine Coon is purebred?

The only way to guarantee a Maine Coon is purebred is to purchase one with pedigree papers or purchase a DNA test from a reputable supplier.

Strong indicators that a cat is a Maine Coon include the large size, heavily furred ears and ear tufts, and the large neck ruff.

Are there shorthaired Maine Coon cats?

There are no shorthaired Maine Coon cats.