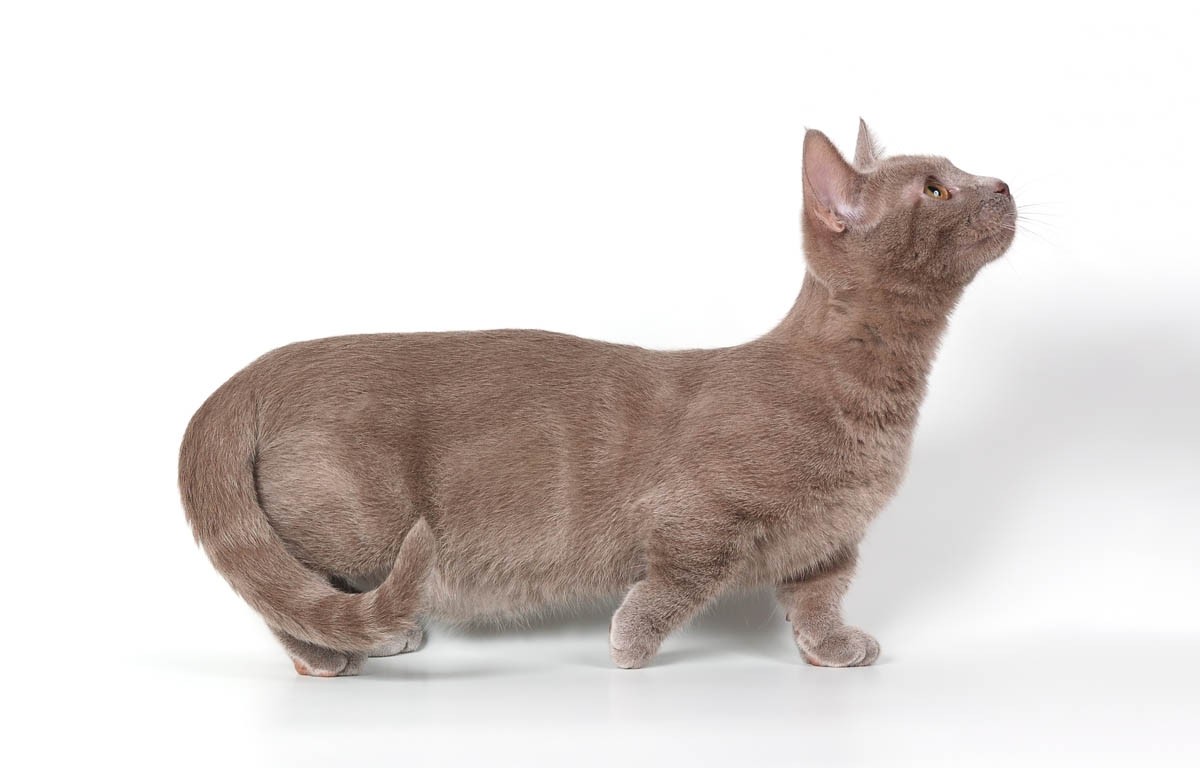 The Munchkin cat is a short-legged breed, which was discovered in Louisiana in 1983. The short legs are due to achondroplasia, a genetic disorder that results in dwarfism.

The Munchkin cat is a relatively new breed of cat discovered in 1983 that is characterised by its short-legged appearance. The breed is the result of a spontaneous natural genetic mutation. The Munchkin isn’t the first short-legged cat, similar cats have been observed in England in the 1930s, sadly these cats disappeared during WWII. Author Max Egon Thiel of Hamburg describes a cat he saw in Stalingraft in 1953 which had an unusual short-legged appearance. He named it the Stalingrad Kangaroo cat.

The Munchkin story starts in 1983 when Sandra Hochenedel, a music teacher from Rayville, Louisiana, rescued two short-legged cats who had been chased under a truck by a dog. Sandra gave away a grey cat, called Blueberry and kept the black one, named Blackberry. Blackberry was pregnant at the time of her rescue and went on to deliver four kittens, two of whom also had the same short legs as their mother. One of the short-legged kittens, Toulouse was given to Kay LaFrance. It is Blackberry and Toulouse who became founders of the breed.

Sandra Hochenedel and Kay LaFrance created the first breed standard and established a breeding program with other breeders joining the cause to establish their own Munchkin breeding programmes.

Introduction to the cat fancy

In 1991, the Munchkin was introduced to the general public via a live cat show held by The International Cat Association (TICA) Madison Square Garden in New York City. It would be many more years before the breed was officially recognised due to concerns the cats would develop back problems due to their shorter legs.

Dr. Solveig Pflueger a show judge, geneticist, Chairperson of TICA’s Genetics Committee and Munchkin breeder along with Dr. David Biller, a veterinary radiologist at Ohio State University School of Veterinary Medicine conducted studies on Munchkin cats. These confirmed the gene responsible was autosomal dominant and that
Munchkins did not appear to have the same spinal problems associated with short legs as Corgis and Dachshunds.

Laurie and Robert Bobskill proposed the new breed which was accepted by The International Cat Association (TICA) in September 1994 and the munchkin achieved TICA Championship status in May 2003.

Not all cat councils recognise the Munchkin due to health and welfare concerns (see below). Cat clubs that do not accept the breed include the Cat Fanciers Association (CFA), Governing Council of the Cat Fancy (GCCF) and Fédération Internationale Féline (FiFE).

The Munchkin is controversial in the cat world, due to concerns about spinal problems due to the short legs and long spine will cause lordosis (downward dip in the spine). This condition also affects short-legged breeds of dog such as the dachshunds.

The short legs may also predispose the Munchkin cat to arthritis, a painful and progressive degenerative condition of the joints.

Munchkin cats may not have the flexibility to groom themselves, which is of a particular issue in longhaired cats.

Pectus excavatum is a condition characterised by a narrow chest and inward concave deformation due to congenital malformation of the sternum and costochondral cartilages.

Progressive retina atrophy is a group of inherited retinal diseases characterised by progressive bilateral degeneration of the retina, which is located at the back of the eye and is responsible for receiving light from the front of the eye.

The Munchkin is a medium-sized cat who is firmly muscled with a well-rounded chest. The back is flat, with a slight rise from the shoulders to the rump. Hindquarters are straight when viewed from behind. Legs are short with the upper and lower forelegs of equal length and the thigh and lower leg are equal lengths. Slight bowing is permitted in the forelegs of the male.

The head is a modified wedge, medium in size and with rounded contours. Ears are medium and broad at the base. Eyes are round and set well apart. The nose is medium in length with a slight curve. Chin is well rounded. All eye colours are accepted.

The coat can be long or short hair and all coat colours and patterns are accepted.

Allowable outcrosses include domestic shorthair or long hair cats which don’t belong to a breed or munchkin variants.

The Munchkin is an energetic, playful and outgoing breed who maintains his or her kitten-like personality well into adulthood. Their intelligence means they are easy to train to play fetch or walk with a harness. Munchkins love company and get along well with children, dogs and other cats. Their short-legged stature does not hamper the Munchkin, and they can run and play alongside their long-legged counterparts.

Despite their short stature, the Munchkin cat will zoom around the house and can jump, although not as high as a cat with normal length legs. Munchkins have earned the nickname magpie cats due to their love of shiny objects which they love to hide away.

Munchkins do not have any special needs and their care is much the same as any other cat. Brush the coat once a week for shorthaired cats and or daily for longhairs to remove loose hair and prevents mats. Dental care is important to prevent gum disease. Clean the teeth with a pet toothbrush and toothpaste. Treat cats for fleas and worms regularly, this includes indoor cats who can still catch parasites.

All cats require an annual veterinary visit to check to ensure they are in good health. Vaccinations may be every 1-3 years depending on local laws, risk factors and the veterinarian’s recommendations.

Munchkin cats thrive on companionship, if you are out of the home for extended periods, consider two cats. Due to their inquisitive nature and intelligence, interactive puzzle games can be a great addition to keep your cat entertained.

Choosing a munchkin kitten or cat

Purebred kittens should only be purchased from a registered breeder. Do your homework and research before choosing a Munchkin kitten. Where possible, visit cat shows and ask for recommendations.

Ideally, you should be able to visit the cattery and meet the cats, unless you are purchasing a cat from interstate.

Ask for guarantees in writing, and never pay cash.

Look for bright, active and inquisitive kittens with clear eyes, a healthy coat and no signs of eye or nasal discharge.

What is the lifespan of a Munchkin cat?

The average lifespan is between 12-14 years which is the same as other cat breeds.

No, most Munchkins don’t need special care. Their shorter legs mean they cannot jump as high as other cats and may benefit from steps or ramps if they have difficulty jumping on furniture etc.

Do Munchkin cats have knees?

How tall is the Munchkin cat?

The average munchkin stands around 8-9 inches from the ground to the shoulders compared to an average cat who stands around 12 inches tall.

Can you breed two Munchkin cats together?

No, the homozygous munchkin, in which the offspring inherit the defective gene from both parents is non-viable and most will die in utero. Munchkin cats can be mated to domestic cats (of no breed) or
munchkin variants, which are long-legged munchkin offspring which means they do not carry the defective gene.

The mutation carried by Blackberry and Blueberry likely came about due to a spontaneous mutation. Mutations happen all the time, some are viable, some are non-viable.

From the spontaneous mutation, breeders elected to selectively breed to other cats to maintain this unique look which is how the munchkin cat became established.

Can Munchkin cats jump on counters?

Yes, most munchkins can jump on kitchen counters. The average cat can jump five or six times his or her height. Most cats stand around 12 inches from the ground to the shoulders, which means they can jump between 60-72 inches. The height of a munchkin is between 8-9 inches, which would mean they can jump anywhere between 40 and 54 inches. Countertops are approximately 36 inches high.

There is no evidence that Munchkins are any more or less hypoallergenic than other breeds of cat. Interestingly, for allergy sufferers, Purina announced it has developed a cat diet designed to manage allergies to cats.