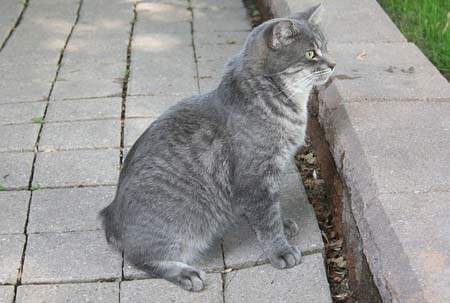 Table of Contents hide
1 At a glance
2 What is Manx syndrome?
3 Manx gene
4 Symptoms
5 Diagnosis
6 Treatment

About: Manx syndrome is a collection of disorders affecting the spine, hind legs and colon of tailless cats due to a shortened spine and spinal cord.

Diagnosis: Presenting symptoms along with imaging to evaluate the spine and nerves.

Treatment: Manage symptoms such as stool softeners and diapers.

What is Manx syndrome?


Manx syndrome is a collection of disorders affecting the spine and sometimes the hind limbs of affected cats. It is believed to be a form of spina bifida, in which the spine fails to develop as it should.

The condition is congenital (present at birth) and occurs during development in the caudal (tail) region of the embryonic neural tube. The (caudal/tail vertebrae) are absent and in some cases, one or more of the sacral bones are deformed or reduced in number. Along with this, a shortening of the spinal cord (spinal cord dysgenesis) and/or absence of the cauda equina (the bundle of nerves located at the lower end of the spinal cord which transmit messages to the pelvic organs and hind legs), resulting in fecal and urinary dysfunction due to innervation in the anal and perineal area affecting the bladder and anus. Partial paralysis may also occur in the hind legs.

Manx syndrome gets its name from the Manx cat, a breed of tailless cat originating from the Isle of Man. Not all Manx cats are tailless, tail length varies from no tail to a full-length tail.

The gene responsible for taillessness, labelled M is dominant, meaning only one parent is necessary to pass on the gene. The offspring will be Mm. If both parents pass it on resulting in a cat with two M genes (MM), it is lethal, and the offspring typically die in-utero.

Manx syndrome can range in severity depending upon the extent of the abnormality. Affected cats may have one or more of the following:


Symptoms of Manx syndrome can vary depending on the level of the spinal cord or cauda equina malformation. They typically appear from birth weeks to months later and may include the following:


Your veterinarian will perform a physical examination and obtain a medical history from you. He may need to perform some diagnostic tests including:


There is no cure for this condition, treatment is aimed at managing symptoms. The prognosis for severely affected cats is grave and in most cases euthanasia is recommended.