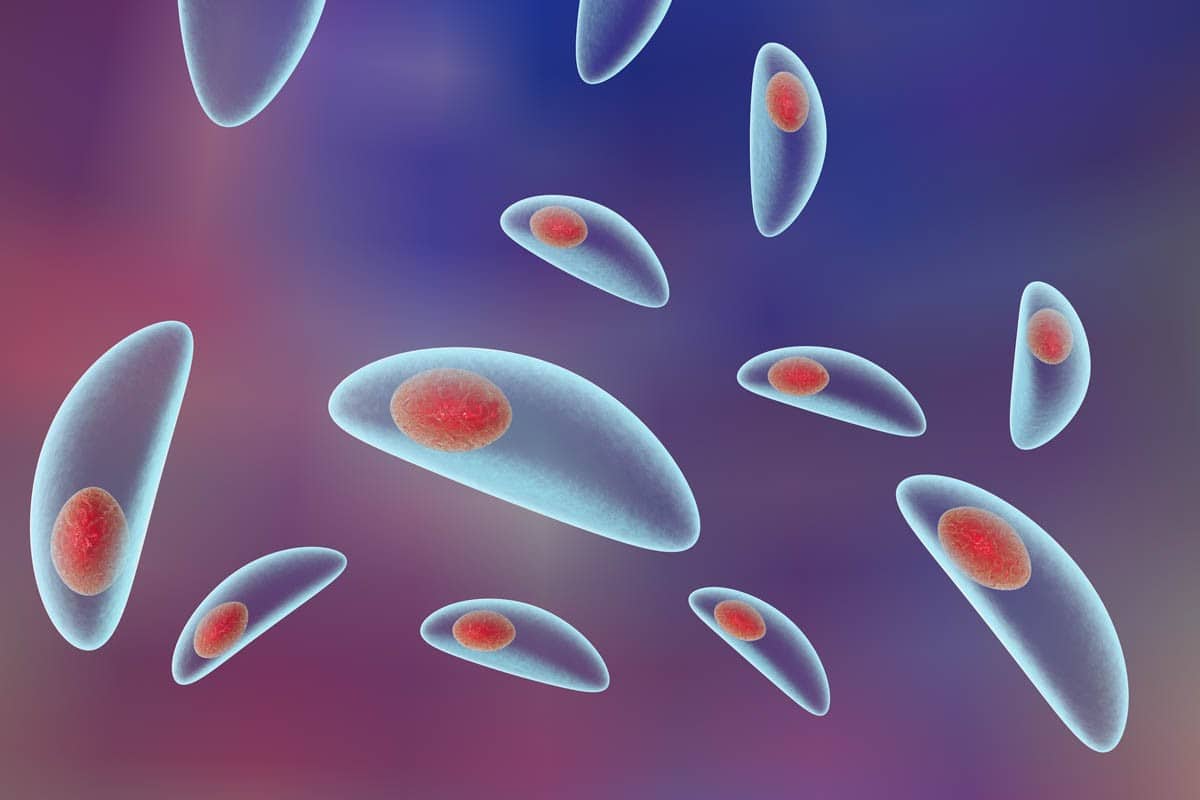 
Toxoplasmosis is an infection caused by the intracellular parasite Toxoplasma gondii. It infects multiple warm-blooded animals including humans, livestock, and birds (all of whom act as intermediate hosts). Cats are the only definitive hosts to T. gondii, which means that the parasite is only able to sexually reproduce in felines (both wild and domesticated).

Most people have heard of toxoplasmosis due to the risks an infection poses to pregnant women. If infection occurs during pregnancy, it can cause abortion or congenital defects to the fetus.

Oocysts – The infected cat sheds thousands of oocysts in the feces which are incredibly hardy and can survive in the environment for years. At this point, they are ‘unsporulated’ (and non-infective) but become sporulated between 1-5 days depending on environmental conditions. Once sporulated, they are infective. The next host becomes infected by ingesting water, food or soil contaminated with sporulated oocysts.

Tachyzoites – Once ingested, oocysts cell walls dissolve, and the parasites replicate in the gastrointestinal tract before they disseminate around the body and into any tissue where they convert to tachyzoites and replicate inside host cells. The cell ruptures and dies, and the tachyzoites are released into the bloodstream, where they are spread to other organs and tissues in the body.

Bradyzoites – At this point, the host’s own immune system mounts an attack in the infection. In response to this, tachyzoites convert to bradyzoites and form cysts within the tissue. Tissue cysts can remain in the host for an entire lifetime. The location of these cysts varies from species to species, but commonly affected parts include the brain, eyes, heart and skeletal muscles. At this point, if the host (for example a rat, bird, cow etc) consumes infected tissue containing cysts, they become infected.

Oocysts are shed in the stool 3-10 days after infection, which continues for two weeks. Felines are the only host who sheds oocysts in their feces. After a cat eats infected prey or raw meat containing cysts, they break open, multiplying in the small intestinal wall, producing oocysts, which are then shed in the feces (intra-intestinal cycle). Other tachyzoites in the intestinal wall move into other parts of the cat’s body, eventually forming bradyzoites (cysts).

Most infected cats show no symptoms. Kittens, young cats, and immunosuppressed cats (for example, those infected with Feline immunodeficiency virus or feline leukemia virus) are most likely to display symptoms, which may include:

More severe symptoms will depend on the organ affected and can include inflammation in the eye (retina, iris or cornea), pneumonia, central nervous system disorders such as head pressing and circling, pancreatitis, hepatitis (inflammation of the liver), jaundice, vomiting and diarrhea, enlarged lymph nodes.


Diagnosis usually involves a routine blood test to detect antibodies in the blood. Your veterinarian could also examine a stool sample, although this would only offer a diagnosis if the cat was shedding oocysts at the time.


In healthy immunocompetent cats, treatment generally isn’t necessary. A combination of Azithromycin and Clindamycin may be prescribed. These medications cannot kill tissue cysts.


There are four modes of infection in humans.

The percentage of people who have had toxoplasmosis varies from country to country, but worldwide, approximately 1 in 3 people have antibodies to the parasite. The most common mode of infection is via contaminated soil, undercooked meat or unwashed washed fruit and vegetables.


As with cats, symptoms are usually rare in immunocompetent, and up to 80% of people infected are unaware they have the infection. If symptoms do occur, they may include:

Severe toxoplasmosis in humans can sometimes occur and cause damage to the eyes, brain, heart, and liver. This is more likely to happen in immunocompromised individuals such as people with HIV, organ transplant recipients and patients undergoing chemotherapy.

Recently there have been suggestions that toxoplasmosis may trigger schizophrenia in humans.

If you are pregnant or are immunocompromised due to HIV or medications, your caregiver will prescribe a course of antibiotics.

Effects on the fetus


Transplacental infection occurs in cats and pregnant women who become infected for the first time during pregnancy. Tachyzoites cross the placenta and invade fetal cells, this is particularly dangerous during the first trimester when the organs are developing. Toxoplasmosis in the unborn baby can lead to miscarriage, low birth weight, vision problems, hearing loss, hepatosplenomegaly (enlarged liver and spleen), jaundice, learning disabilities and mental retardation. Between 80-90% of babies who acquired the infection in utero have retinal infection leading to inflammation and possibly a chorioretinal scar containing the inactivated cyst (bradyzoite).

In pregnant women, it is easier to pass toxoplasmosis on to the fetus during the second and third trimesters; however, the disease is typically milder in the last ten weeks of pregnancy than if the embryo/fetus is infected during the first and second trimesters.

What happens if a pregnant woman becomes infected?

If you or your doctor suspect you have toxoplasmosis, as a precaution, you will be put on a course of antibiotics (usually spiramycin) to reduce the chances of passing the infection onto your unborn baby.

Your caregiver will recommend an amniocentesis to determine if the baby has the infection.

Multiple ultrasounds throughout your pregnancy to look for abnormalities will be necessary if it is determined your baby has toxoplasmosis.

No, this isn’t necessary. If you are pregnant and have a cat, we recommend you speak to your doctor or midwife who may suggest a blood test to check for antibodies to toxoplasmosis. The presence of antibodies means you have had exposure to T. gondii at some stage in your life. This means your immune system has already built up a resistance; therefore, you are very unlikely to become re-infected.

What precautions can a pregnant woman take to avoid toxoplasmosis?

Unwashed fruit and vegetables and undercooked meat are an important source of infection. Drinking untreated water (from a stream or river for example) and gardening are also potential sources.

Are there other ways to catch toxoplasmosis from my cat?

What about immunocompromised people?

Immunocompromised people can still enjoy living with their cat but must take the precautions listed above.

Toxoplasmosis affects the brains of mice and rats who have a natural aversion to the smell of cat urine. Rodents infected with T. Gondii lose their fear of cat urine, which makes them more vulnerable to predation by cats and continuing the life cycle of the parasite.