Feline hyperthyroidism at a glance

About: Feline hyperthyroidism is a common disease caused by a benign hormone-secreting tumour of the thyroid gland. It is the most common endocrine disorder in cats and occurs most often in cats over ten years of age.

Treatment: There are several treatment options, including surgery to remove the tumour, radioactive iodine treatment to destroy the tumour, prescription diet or medications to control it.

Also known as thyrotoxicosis, hyperthyroidism (FHT) is an endocrine (hormonal) disorder that is caused by the overactivity of the thyroid gland due to a benign tumour that speeds up your cat’s metabolism.

Located in the neck on either side of the windpipe, the thyroid gland produces two hormones, T3 triiodothyronine and T4 thyroxine, both of which control metabolism. Feline hyperthyroidism is the most common disease of the endocrine system, and according to the AAFC (American Association of Feline Practitioners, between 1.5 – 11.4% of cats globally have hyperthyroidism. One insurance company, Nationwide Insurance, listed hyperthyroidism as the fifth most common medical condition in 2015.

The most common cause is a benign tumour (adenoma) on one or both of the thyroid glands. It can be bilateral (80%) or unilateral (20%). 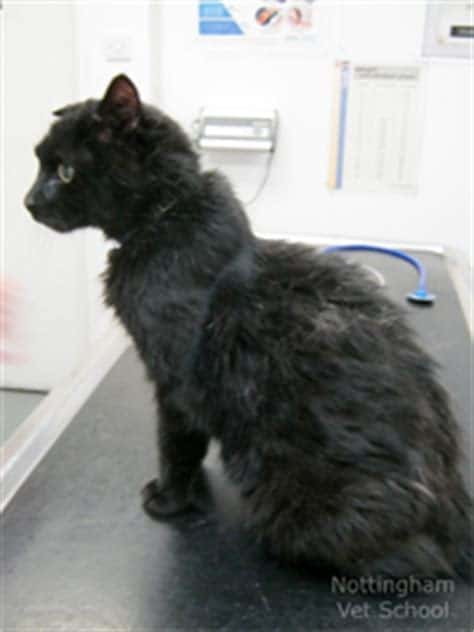 Your veterinarian will observe your cat’s clinical signs, palpitate the thyroid gland, other diseases such as renal failure and feline diabetes have similar symptoms.

In 2016, the AAFP issued updated guidelines for classifying hyperthyroidism in cats as follows.

Effects of hyperthyroidism on the cat


An increase in levels of thyroid hormones speeds up the cat’s metabolism (called a hypermetabolic state) which leads to a hyperdynamic cardiovascular state in which the heart beats faster which eventually causes congestive heart failure and secondary hypertrophic cardiomyopathy.

High blood pressure (hypertension) is another common side effect of hyperthyroidism in cats. Hypertension has a serious impact on several organ functions. Swelling and bleeding into the eyes can lead to blindness, hardening of the arteries, a hardening of the heart muscle, which over time can cause congestive heart failure and increased risk of stroke.


There are four options to treat hyperthyroidism in cats, and each treatment has its pros and cons. Treatment will depend on other medical conditions your cat may have as well as the availability of a nuclear medicine facility and cost. Kidney function must be evaluated before and after treatment as hyperthyroidism may mask chronic renal failure.

In 2012, Hills launched a prescription diet called Hills y/d to manage hyperthyroidism. This food is low in iodine, which is required by the thyroid gland to produce its hormones, low iodene=reduced hormone production. It can take a few weeks for this food to take effect.

Pros of this treatment are that it is easy for the pet guardian to manage the disease and cheaper than surgery.

Cons are that it is not curative; it only manages the condition. Some cats may be reluctant to eat the diet or may go off their food when unwell, resulting in hyperthyroidism becoming worse again. Also, the thyroid tumour is still in the cat and may potentially turn cancerous in the future.

The use of medication doesn’t cure hyperthyroidism, only controls it. Medication is administered daily for the rest of your cat’s life.

Short term this is the cheapest option, but in the long run, it can prove costly having to pay for daily medication for your cat. Methimazole can be given either in oral or transdermal (applied to the skin inside the ear) form.

Side effects include vomiting and lethargy.

Removal of the enlarged thyroid lobe(s), known as a thyroidectomy.

Pros of this option are that it is a permanent cure.

Cons include increased anaesthetic and surgical risks due to the effect the disease may have had on the cat’s heart and kidneys. If both glands are removed, there is an increased risk of accidentally removing the small parathyroid glands, (which among other things regulates the calcium supply in the body), which can cause hypocalcemia (low blood calcium).

If both lobes are removed, you will have to give your cat a daily thyroid supplementation.

The gold standard treatment for hyperthyroidism. A single injection of radioactive iodine (radioiodine I-131) concentrates in and destroys the diseased thyroid tissue while leaving the normal thyroid tissue intact.

After treatment, your cat will be slightly radioactive and will have to stay at your veterinarian’s until the radioactive levels drop.

Kidney failure can become worse once treatment begins and your veterinarian will recommend drugs or diet to control hyperthyroidism if your cat has concurrent kidney disease and closely monitor kidney function. That way, if the kidneys do begin to deteriorate your veterinarian can re-evaluate or stop the medication immediately, opposed to surgery or radioactive iodine treatment which is permanent.

Why is hyperthyroidism on the increase in cats?

First described in 1979, hyperthyroidism has become the most common endocrine disorder in cats. So why has this happened?

No specific breeds are prone to feline hyperthyroidism, although one research paper noted that Siamese and Himalayan cats are at a slightly lower risk of developing the disease (Kass, P.H. et al., 1999). It affects older cats 8-10 years plus most often with up to 10% of senior cats will develop hyperthyroidism. There is no sex predilection.

There has been research that points towards a link between the consumption of canned food and hyperthyroidism in cats, especially fish or liver flavoured varieties. (Martin, K.M et al., 2000). BPA (bisphenol A) is a chemical used to line pet food cans to stop erosion and is a known endocrine disrupter, meaning it interferes with hormone systems. A large number of plastic products also contain BPA.

PBDE’s are flame retardants which are known endocrine disrupter, which are found in many household products including furniture and electronic goods as well as in large fish.

Exposure occurs through inhalation of dust containing traces of PBDE’s as well as ingestion during grooming or consuming a particular food. Several studies have found high levels of PBDE’s in cats; however, no conclusive evidence shows a direct link between PBDE’s and hyperthyroidism in cats. Certainly, there is a growing body of evidence towards the health risks of PBDE’s.

Lack of iodine supplementation in certain brands of cat food, but different reports suggest over-supplementation of iodine is the cause, exposure to well water, exposure to gas fireplaces, cat litter and frequent carpet cleaning. (Edinboro C.H. et al., 2004 and 2010). The general opinion is that it is likely several contributing factors that lead to hyperthyroidism.

Update December 2016. A study in the American Chemical Society’s Environmental Science and Technology journal points fish flavoured food being responsible for exposing cats to PBDE’s and PCB’s. You can read more about this here.

There is a foolproof way to prevent hyperthyroidism; certainly, exposure to tinned cat food, especially fish (which can contain high levels of iodine and PBDE’s), and those with pop-tops seem to pose a higher risk to cats. Small cans are less likely to be lined with BPA.