Breathing is a part of the respiratory system which involves moving air into and out of the lungs. Oxygen is pulled into the lungs, which is then transported to all the cells within the body via the bloodstream, and carbon dioxide is expelled.

There are several causes of difficulty breathing in cats, and different types of breathing abnormalities, which we have listed below.

At rest, a cat breathes approximately 20-30 times per minute which is approximately twice that of a human. The process of breathing begins with inhalation

Respiration should be smooth, quiet and without effort, this is known as eupnea. The suffix pnea meaning breath or breathing; you will note types of breathing difficulty end in pnea. 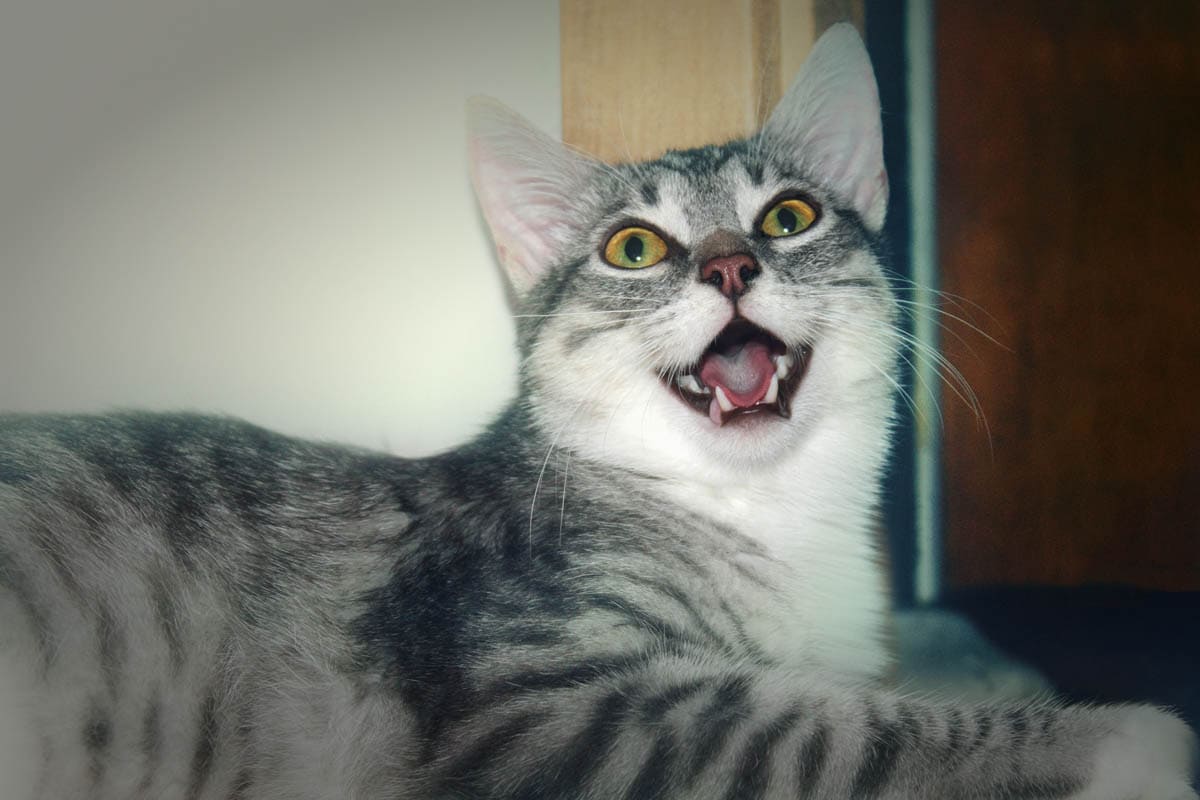 Breathing difficulties can be acute or chronic depending on the underlying cause. Often symptoms are subtle, and pet owners may not immediately recognise there is a problem.

Any signs of difficulty breathing, no matter how small, require urgent veterinary attention.

The veterinarian will perform a physical examination which will include listening to the heart and lungs.

The goal is to address the cause, provide treatment to improve the cat’s ability to breathe and offer supportive care.

The priority is to stabilise a cat who is having difficulty breathing, as they are extremely fragile.

In most cases, supportive care can include fluid therapy, nutritional support, remove discharge to assist breathing and in some cases, antibiotics, which won’t work for a viral infection but will be necessary if a secondary bacterial infection develops.

Treatment for heat stroke includes bringing the cat’s body temperature down, providing oxygen and treating for dehydration (where necessary).

Bronchodilators to open up the airways and steroids to reduce inflammation.

There are no medications safe to treat heartworms in cats. Most veterinarians will recommend a wait and see approach. In severe cases, medications will require off-label medications to kill the worms. This comes with its own risks so should be carefully weighed up.

Surgery to remove the blockage.

Treat the underlying cause, as well as oxygen therapy to stabilise the cat followed by thoracentesis to remove fluid which allows the lungs to expand.

Low iodine diet results in a decreased production of thyroid hormone, surgery to remove the tumour or radioactive iodine treatment to kill the tumour.

Treat the underlying cause as well as diuretics to remove excess fluids by increasing urine output, oxygen therapy, vasodilators to open up the airways, sedatives and cage rest.

Treat the underlying cause as well as diuretics to remove excess fluids by increasing urine output, oxygen therapy, vasodilators to open up the airways, sedatives and cage rest.

Address the underlying cause as well as blood transfusion; erythropoietin is a hormone produced by the kidneys to stimulate red blood cell production, cats with kidney disease often have low levels of this hormone, oxygen therapy in severe cases.

Treat the underlying cause such as antibiotics for bacterial infection, as well as fluid therapy to treat dehydration, oxygen therapy and cage rest.

Thoracocentesis to remove larger volumes of trapped air or a tube thoracostomy where recurrent thoracocentesis has occurred. Oxygen therapy and pain relief if necessary.

Surgery to remove the pituitary gland, this treatment will require lifelong administration of hormones. Radiation therapy to kill the tumour, or medications to inhibit the production of growth hormones.

Conventional or laser surgery to correct the palate.

Surgery to remove tumours where possible as well as radiation therapy and/or chemotherapy.

Treat the underlying cause where possible as well as bronchodilators to open the airways.

There is currently no cure for FIP and treatment is palliative although there is a potential new treatment on the horizon with a small trial showing a high success rate. The treatment is a broad-spectrum anti-viral drug GC376.

Low levels of oxygen in the blood:

Treat the underlying cause as well as supportive care such as painkillers, oxygen therapy, fluid therapy, nutritional support and blood transfusion where necessary.

Decrease body temperature by introducing cool fluids intravenously or by enema, oxygen therapy and in some cases corticosteroids to reduce swelling in the throat.

Cage rest, oxygen therapy, fluid therapy, thrombolytics which are medications to break down the clot, and possibly anticoagulants to reduce the occurrence of blood clots forming. Unfortunately, the prognosis is poor for cats with this condition.

Treat the underlying cause as well as oxygen therapy, bronchodilators or nebulisers may be necessary to help the cat breathe. Thoracic drainage tubes to remove fluids from the pleural cavity. Supportive care includes pain medications, intravenous fluids, and nutritional support.

Treat the underlying cause as well as the removal of fluid from the abdomen (abdominocentesis), diuretics to promote the production of urine and dandelion extract to prevent fluid build-up.

Surgery where possible but in many cases treatment is supportive, which may include exercise reduction, medications to remove fluid build-up, low sodium diet.

These are usually self-limiting in healthy adult cats. Supportive care will be given including fluid therapy if necessary, and nutritional support, removal of nasal and eye discharge as well as steam therapy. If the cause is bacterial, antibiotics will be prescribed.