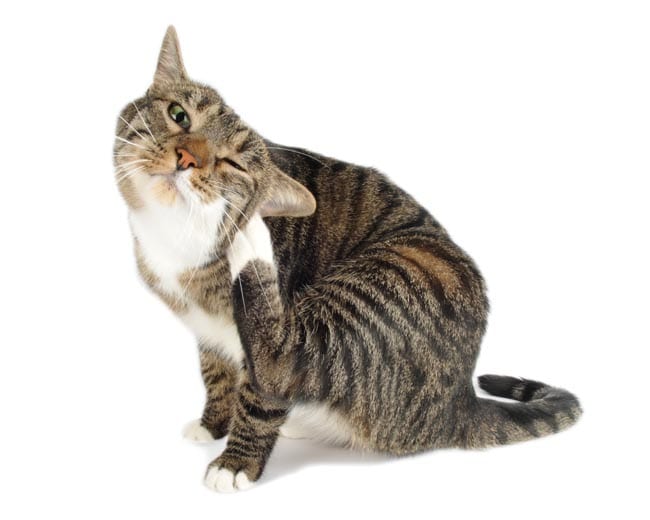 Table of Contents hide
1 Can you catch fleas from a cat?
2 What are fleas?
3 What about human fleas?
4 Treating flea bites
5 My child has head lice, did they come from the cat?
6 What’s the difference between head lice and nits?

Can you catch fleas from a cat?

The fleas responsible for infecting cats and dogs don’t live on humans; however, they can bite.

The flea is a wingless parasite with a global distribution. There are 2,000 species of flea all of which have a preferred host. Ctenocephalides felis is the flea to affect cats and is the most common species of flea.

The flea has a 4 stage life cycle, egg, larvae, pupae and adult flea. Only the adult flea lives on the cat, the other three stages of the flea life cycle are off the cat, in the home.

From time to time, opportunistic fleas will bite a human, but they generally prefer to stick to their natural host. However, adult fleas can survive for many months in the environment and off their host without feeding. When fleas bite humans, it usually occurs on the lower limbs. Symptoms of a flea bite include a small, red bump and extreme itchiness. So while it is possible for a flea to bite a human, they do not live on us.

What about human fleas?

Do not scratch a flea bite as it will make it worse and you run the risk of infecting the wound.  Apply some antiseptic or anti-itch cream on the affected area or ice it.

My child has head lice, did they come from the cat?

No, head lice are a different species of parasite. They live on the scalp of humans, feeding on the blood. Fleas jump from host to host (note the long back legs on the flea image). Head lice are spread by close contact with an infected person. Head lice do not live on cats, and cat fleas do not live on humans. So, if your child has head lice, he caught them from an infected person, not the family pet.

What’s the difference between head lice and nits?

Head lice are the adult parasite; nits are the eggs of the head louse.