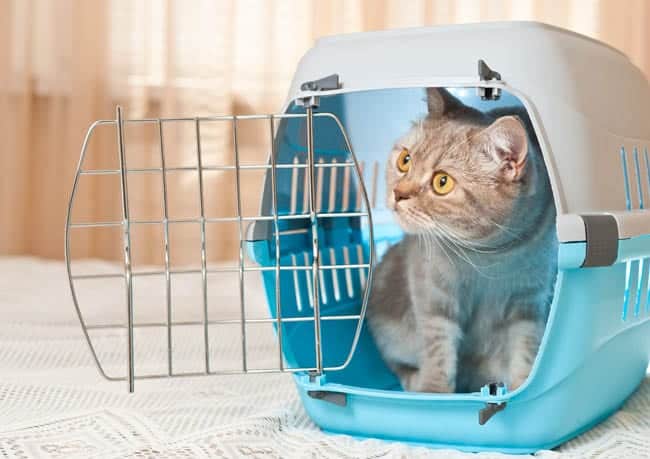 Cat carriers are a must for the cat owner. They are a means of safely transporting your cat (for example to the vet or a boarding cattery), by keeping it secure.

A cat should always be placed in a cat carrier while transporting it, especially in a car. An unrestrained cat in a vehicle is a danger not only to himself but the driver and other road users and pedestrians.


Cardboard carriers can be used as an emergency, but they really aren’t very strong and can easily break. They can be okay to use when transporting a kitten but should be avoided unless absolutely necessary with older/heavier cats. As cats can often be stressed when being transported, they may also urinate or defecate, which weaken or destroy the cardboard.

Hard carriers have the advantage of being easy to wash if there is an accident. But they can be bulky.

Soft carriers take up less storage room, so may be of benefit in households where there are several cats; however, they are harder to clean than hard carriers.

What to look for in a cat carrier

How many cat carriers do I need?

If you live in an area which has a risk of evacuations due to disasters (flooding, hurricanes, earthquakes, bush fires), there should be one carrier per cat, even if you have one sturdy one and several foldable soft carriers for emergencies.

Introducing your cat to a cat carrier

It is recommended that you accustom cats to their carrier before an emergency occurs. If the cat isn’t used to the carrier and you do have an emergency, you may find it difficult to get the cat inside, which can cause a delay, and stress out the cat.

Leave the carrier accessible in the home. Put a soft blanket or towel in the bottom for comfort and add some treats or toys. Let the cat sniff out and explore the carrier in his own time. If he does enter the carrier, leave the door open and allow him to come as he pleases.

Transporting your cat in the carrier

When the time comes to transport your cat, do the following:


Store cat carriers in easy to reach place so that they can be quickly located in an emergency.

Even better, if space permits, keep the carrier out in the open so your cat can come and go as they please. That way, the carrier isn’t associated with stressful trips to the veterinarian.