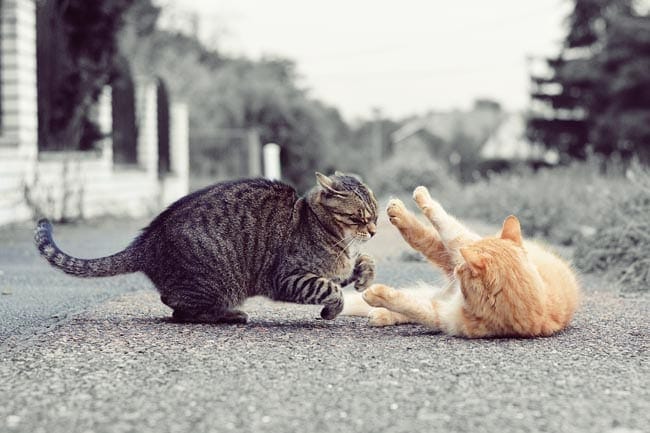 Table of Contents hide
1 Why do cats fight?
2 How to safely break up a cat fight
3 How to reduce the risk of cats fighting
4 Fighting among household cats

Why do cats fight?

Cats can be very territorial, and inter-cat aggression is common among household cats as well as cats who live close to each other. Males are more prone to territorial fighting than females, although it is also possible for females to fight, and males and females to fight. It all comes down to the cats and their personality. My experience has been that of male to male fighting. Some households will never experience fighting at all.

Cats who roam outdoors are much more likely to become involved in cat fights. Either by wandering into a neighbouring patch which has another cat or a cat encroaching on your cat’s territory. We’ve all heard the caterwaul late at night.

There are several risks your cat is exposed to when he engages in fights. Not just injury from bite wounds and scratches, but he also becomes exposed to cat diseases such as Feline Leukemia and Feline immunodeficiency virus (FIV/cat AIDS).


Never, ever get between two cats having a cat fight. You risk severe injury in doing so. Cat bites and scratches frequently become infected, and it is just not worth the risk.

If you do need to break up a cat fight the safest way to do so is throw a blanket or towel over the cats or use a broom to separate them.

Be aware that cats will be very wound up after a fight, and you are still at risk of being bitten or scratched after the event. Give your cat(s) time to calm down before approaching/petting them.

How to reduce the risk of cats fighting


Inter-cat aggression is a common problem and a significant cause of concern when it occurs. I have had multiple cats over the past 20 years, most of whom get along just fine, but sometimes you will have cats who don’t like each other.