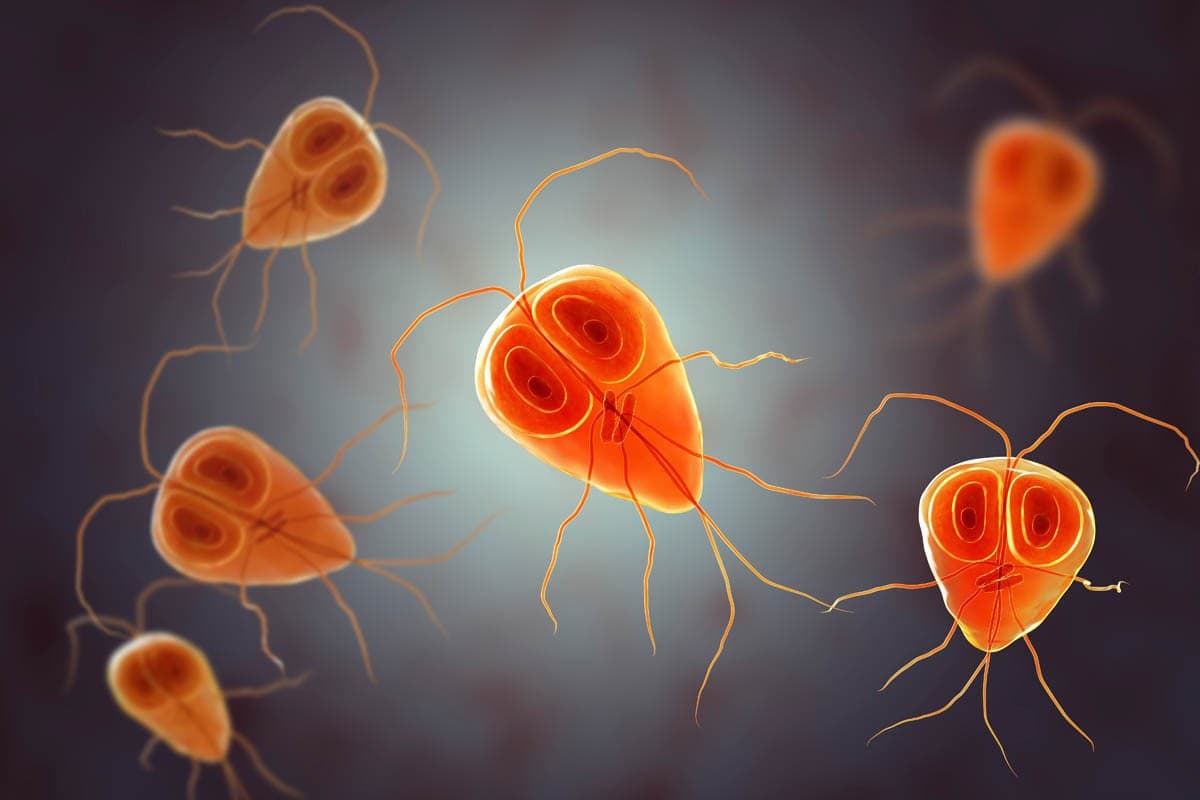 Giardia at a glance


Giardia is an intestinal parasite caused by the protozoan parasite Giardia duodenalis (G. lamblia) which can infect a wide range of mammals and is split into several assemblages (subpopulations) of which has a preferred host.

One study in Australia found the prevalence of Giardia in healthy cats to be 2%, although those numbers may be up to 12% in crowded conditions such as shelters and catteries. Infection in kittens and young adults are most common as well as cats in over-crowded or stressful environments and immunocompromised cats.

The geographical distribution of Giardia is worldwide and is a common cause of diarrhea in travellers.

Transmission of Giardia is via the fecal-oral route. The feces of an infected animal contain large numbers of infective Giardia cysts which can contaminate the environment and waterways in several ways:

The live cycle occurs in two stages; the fragile trophozoites found in the small intestine and hard cysts that are shed in the environment via the feces. Cysts can survive up to seven months, especially in damp environments.

The incubation period of giardia is 1-14 days. Most cats are asymptomatic but may still shed cysts in their feces.

If large numbers of trophozoites develop, the cat will develop symptoms which include:

Diarrhea may be self-limiting; however, in cats with prolonged diarrhea, dehydration and lethargy can develop due to loss of fluids.

Fecal flotation (zinc sulfate solution): To detect cysts. Cysts may not be present in the stool of a cat with diarrhea.

Fecal smears: To detect the active trophozoites. These are more likely to be seen moving around in watery stools and cysts are more common in firm stools. A negative sample doesn’t necessarily rule out giardiasis. Three stool samples should be studied over a period of 7 – 10 days before a definite diagnosis is made.

SNAP test: IDEXX Laboratories have a SNAP Giardia test kit which is available for in-house testing. The sensitivity of this test is 90%.


Several medications may be used to treat clinically affected cats; however, no drugs been approved for the treatment of giardia in cats in the USA.

This medication also has the benefit of having anti-inflammatory properties. Do not use in pregnant cats as Flagyl is suspected of being teratogenic (can increase congenital abnormalities). Side effects may include loss of appetite and hypersalivation, presumably due to the bitter taste of this medication.

An anthelmintic (anti-parasitic drug to kill worms), may be used particularly if concurrent infection with parasitic worms is suspected. Metronidazole and Fenbendazole may be used in conjunction with each other.

Antibiotic and antiprotozoal medication. Furoxone can cause vomiting and diarrhea and should not be used in pregnant cats.

Fluids to treat dehydration and nutritional support. Try to encourage water intake to replace lost fluids. If your cat is not drinking, your veterinarian may recommend Pedialyte, which can help replace lost fluids and electrolytes.

Feed a bland diet to rest the cat’s gastrointestinal tract.

Giardia can remain active in the environment for up to seven weeks. The following disinfectants are effective.

Can I catch giardia from my cat?

This answer is still not entirely known, so it is safe to err on the side of caution and assume transmission of giardiasis from cats to humans is possible.

As you can see from the ‘assemblages’, cats can be infected with A1 or F, whereas humans are infected with A1, A2 and B. So it is feasible that if your cat has become infected with A1, transmission is possible. It is unlikely that a cat infected with F could pass it on. Regardless, it is always better to play safe and assume infection is a possibility and take appropriate safeguards when dealing with an infected cat.

The reinfection rate of Giardia is extremely high; it is important to take steps to not only treat the cat but decontaminate the environment and practice safe hygiene during an outbreak.