Table of Contents hide
1 Do all cats like catnip?
2 Why do cats go crazy on catnip?
3 Catnip response in cats
4 Effects of catnip on cats
5 Is catnip harmful to cats?
6 Where can I buy catnip?
7 How do I give my cat catnip?
8 Other plants that get cats high
9 Does catnip work on humans too?

Nepeta cataria, commonly known as catnip, catmint, field balm or catswort is a vigorous perennial herb which belongs to the genus Nepeta, a part of the mint family (Lamiaceae), which comprises of approximately 250 species. Catnip is native to Eurasia but has naturalised in North America, Europe and New Zealand.

Sensitivity to catnip is an inherited trait and is autosomal dominant (this means cats only need to have one copy of the gene to be affected by catnip), and females show a stronger response. Neil B. Todd found 36% of cats are immune to its effects and kittens under 6 months of age don’t respond to catnip at all. Large cats including lions, tigers, bobcats, jaguars, servals and snow leopards also respond to catnip, but it does not affect other species of animal.

Why do cats go crazy on catnip?

The leaves and stems of the plant contain volatile oil by the name of nepetalactone (pronounced nehpet-ah-lactone). This compound has a similar effect on the brain as sex pheromones. The catnip plant uses nepetalactone to repel insects, and been found to be repellent to mosquitoes, termites and cockroaches, in fact, the American Chemical Society reports that nepetalactone is ten times more effective than DEET at repelling mosquitoes. Cats can detect it in concentrations as low as 1 part per billion. 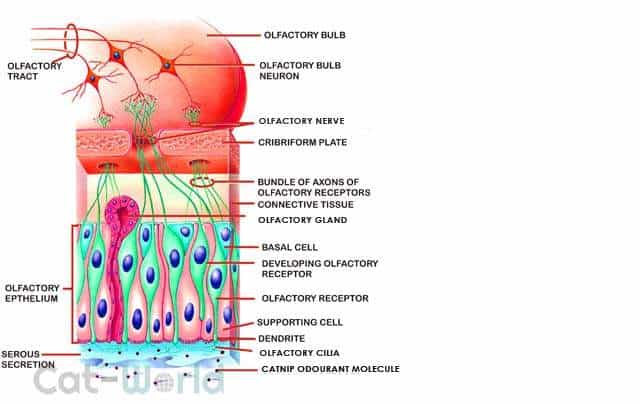 One study describes four components in the cat’s response to catnip.

Effects of catnip on cats

Nepetalactone produces a euphoric effect on cats which is due to nepetalactone mimicking the sexual pheromones found in the urine of tomcats (entire male cats). Additional responses include playing, chasing, aggression, drooling and hunting.

The effect lasts for 10 minutes, and after that, catnip will have no effect on the cat for anywhere from 30 minutes to several hours.

No, catnip is not dangerous to cats, and they can not overdose on it.

Where can I buy catnip?


Most pet shops sell dry catnip, and you can buy catnip plants from your local garden centre.

How do I give my cat catnip?

Sprinkle it on the ground or your cat’s favourite toys. Cats can enjoy catnip fresh or dried.

Other plants that get cats high

Catnip is not the only plant which induces a high in cats; other plants include:

Does catnip work on humans too?

Catnip doesn’t induce a high in people. Instead, it has mild sedative effects, and catnip tea is reported to have mild digestive benefits, Native Americans used to use catnip as a treatment for colic in infants.