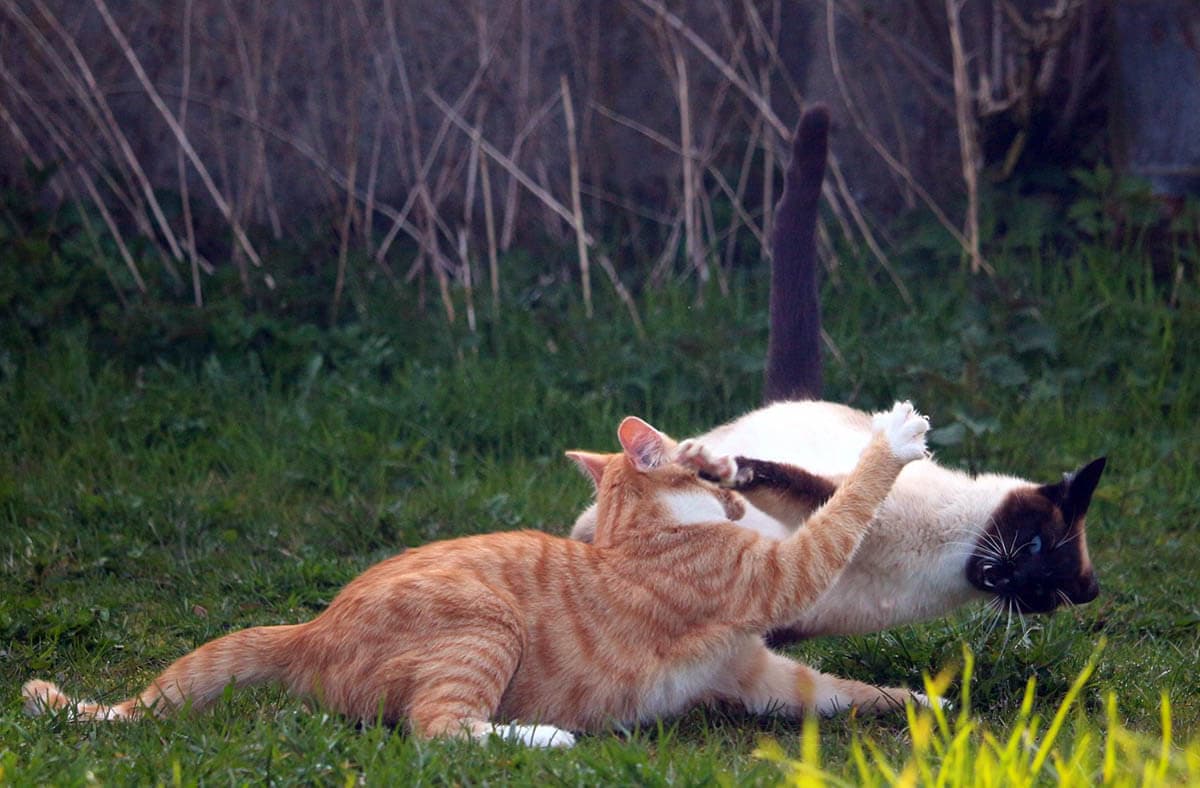 A cat fight can develop between cats who share a home (inter-cat aggression) or between cats outside squabbling over territory or females. Two (or more) cats fighting can be an alarming sight and one which has the potential to cause injury to the fighting cats as well as well-meaning people who try to break up a fight.

Aggression between cats can be classified as fear-related, play-related, territorial, non-recognition or redirected aggression.

Redirected aggression occurs when an outdoor cat causes a cat in the household to lash out at the cat’s owner or a feline housemate when the original target is inaccessible.

Play aggression is most commonly seen in kittens, and in most cases, it is well-meaning. Kittens engage in play aggression as a way to hone their hunting skills, if the kitten is too aggressive towards his or her siblings or mother, they will be put in its place. If the kitten hasn’t had this early interaction, he or she may grow up with inappropriate boundaries which can manifest as play aggression.

Territorial aggression can develop between household cats who fight over key resources or non-household over territory.

Fights can also break out when a new kitten or cat is introduced to a multicat household without a gradual introduction.

Non-recognition aggression is a type of aggression which occurs between household cats who are separated and then reunited. One cat leaves the house for some time (such as a visit or a stay at the veterinary hospital) and when he returns, is met with uncharacteristic aggression by the resident cat(s).  The term ‘non-recognition aggression‘ describes the situation to a tee, as the resident cat quite literally doesn’t recognise his feline sibling after a period apart.

Getting in between cats in the middle of a fight carries the risk of injury or infection with an incidence of 400,000 cat-related injuries per year and 66,000 visits to hospital emergency departments. Pathogenic organisms including  Pasteurella multocida which can cause an extremely painful abscess, rabies and Bartonella henselae (cat scratch disease), Yersinia Pestis (plague), Francisella tularensis (tularemia) can be transmitted via bites or scratches.

Dos and don’ts when breaking up a cat fight

Don’t: Break up a cat fight with your hands or any other part of the body.

Do: Ensure that children and other pets are removed from the area.

Do: Use a spray gun or hose (the fight is outside), or a broom to physically separate the cats, bang two kitchen pans together or throw a cushion at the cats or a towel over them to cause a distraction.

Don’t: Throw hard objects at the cats or hit them.

Don’t: Pick up the cat immediately after the fight as the cat will still be agitated and there is a high chance he or she will lash out at you.

Do: Check the cat (or cats) over once they have had time to calm down.

Do: Separate fighting cats into separate rooms once you can safely do so to allow them to cool down.

Keep cats indoors or provide them with the safety of a cat enclosure to prevent fights between neighbourhood cats. Cat bites carry the risk of injury to either cat as well as transmission of diseases which include feline immunodeficiency virus and feline leukemia virus.

Maintain a calm and stress-free environment in the home and provide each cat with their own resources, including food and water bowls, one litter tray per cat, plus one extra, multiple cat trees, perches and elevated hiding places,  multiple beds so each cat has his or her own space.

Desex all cats, there is a higher incidence of fighting among entire cats, especially male tomcats.

Use a Feliway plugin which emits a synthetic ‘feel good’ pheromone which can induce a sense of calm in cats.

If fights are breaking out between household cats, pay attention to body language so that you can step in before a situation escalates. Common signs include flattened ears, stiffening of the legs, crouching, staring, crouching, tail swishing, growling and hissing. The best way to diffuse a situation is by diverting their attention with toys, treats or by separating cats for a short period.

Introducing cats slowly, over two to three weeks can reduce the incidence of aggression between the new and resident cats. The new cat should be isolated in his or her room initially to allow for the exchange of smells before physical introductions. This can be achieved by rubbing a towel over one cat and leaving it in the area for the other cat to smell. After a few days exchanging odours, visual contact can be allowed under the close supervision of the owner. Feeding treats to both cats can help develop a positive association between the cats. Introduce cats slowly, and under close supervision until you are confident they are comfortable around each other. If one or both of the cats show aggression, it will be necessary to separate the cats and go back to a gradual introduction.

The general rule with any type of modification behaviour is to reward the behaviour you want. This can be achieved with high value food treats or play therapy.

When to see a veterinarian

Cat fights can cause immediate trauma or injury but sometimes it can take days or weeks for the consequences to become apparent, particularly with the transmission of pathogenic organisms.

The most common immediate injuries are bite wounds and scratches. Injury can also occur as one cat scrambles away from the aggressor, which can lead to muscle and ligament tears and strains.

Injuries to the eyes and deep bites or scratches will need to be evaluated by a veterinarian who can clean the wound and where necessary prescribe prophylactic antibiotics to prevent secondary bacterial infection. The most common injuries to the eyes are scratches to the cornea, which may be treated with ointment to keep the eye lubricated or antibiotic drops.

Keep a close eye on the cat for signs of a bite wound abscess, which occurs when a claw or tooth penetrates the skin introducing bacteria. The body responds by walling off the affected area. An abscess is incredibly painful and will need to be lanced, cleaned and treated with antibiotics.