The Ocicat is a medium-sized domesticated breed with the look of a wild cat. The breed was established by crossing the Abyssinian cats with Siamese and gets its name from the ocelot.

Ocicats are active, friendly and outgoing, and some describe them as dog-like in nature.

The Ocicat is a man-made breed of cat which derives its name from the Ocelot, a spotted cat from South America. The Ocicat breed, however, has no wild blood. In 1964, a breeder by the name of Virginia Day (Dalai) from Michigan mated an Abyssinian male to a Seal Point Siamese. The aim had been to produce an Abyssinian-pointed Siamese.

The resulting litter all had the Abyssinian type (as would be expected). Virginia then mated a female from this litter named Dalai to a Chocolate Point Siamese named Whitehead Elegante Sun. This next litter produced Siamese cats with Abyssinian points with one exception, a cream coloured male who had beautiful golden spots. Virginia’s daughter commented that the kitten looked like an Ocelot and asked that he be called an Ocicat. This cat named Tonga was sold as a pet and neutered. Virginia repeated this mating which produced further spotted kittens.

Other breeders followed suit, and the American Shorthair was added to the mix to improve the type and introduce silver to the bred. The addition of American Shorthairs resulted in the Ocicat increasing in body size.

The breed was recognised by the CFA in 1966 but didn’t receive championship status until 1987. 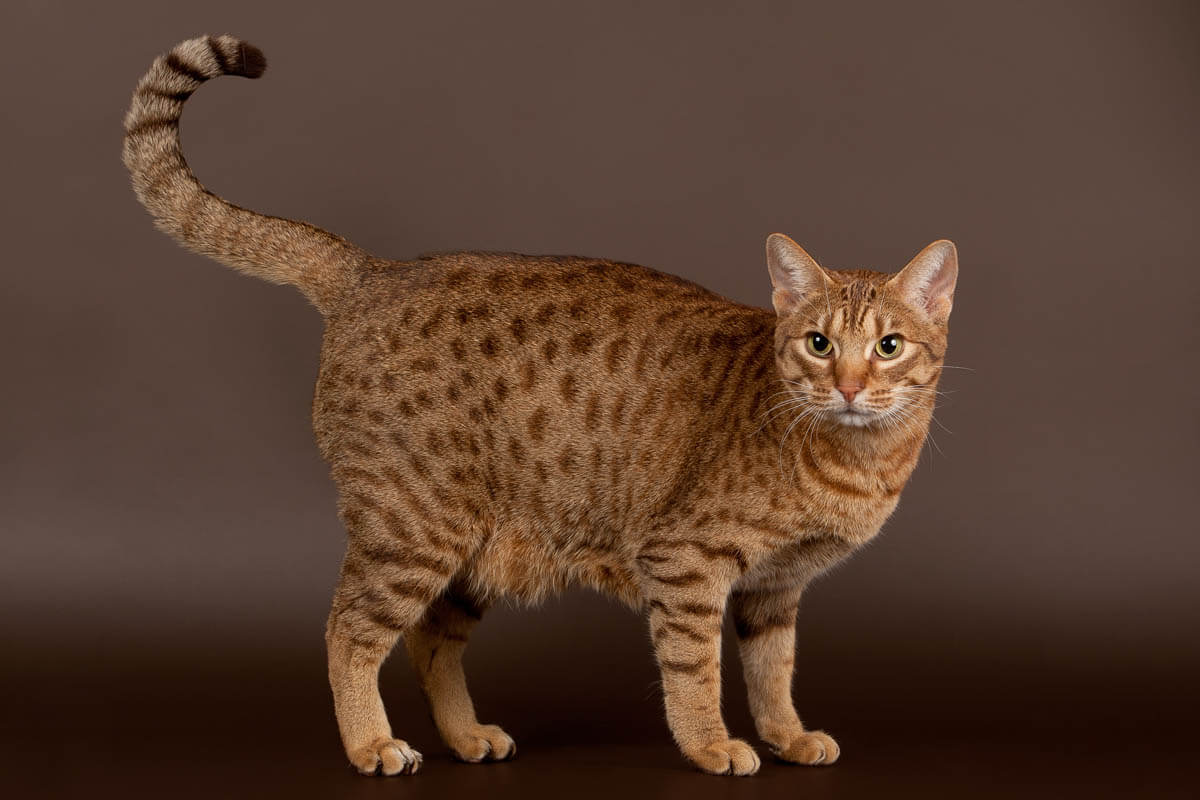 The Ocicat has a wild look it is anything but. He has a large, muscular body with rippling muscles, long legs, and oval paws. The tail is long and tapering.

The head is an intermediate wedge, which is longer than it is wide — large, almond-shaped eyes which are angled towards the ears. Ears are broad and rounded at the tips.

The coat is short and glossy, with large, contrasting spots. Ocicats come in a range of colours including:

Males weigh between 5-7 kg and females are slightly smaller, weighing between 4-5 kg.

Ocicats are extremely lively, confident, outgoing, intelligent and have many dog-like traits such as playing fetch. Many Ocicats are quite happy to walk on a leash and are said to be easy to train.

Ocicats are very loyal to their owners, and they do not like being left on their own for long periods, so if you are out of the house, then it is a good idea to have a companion for your Ocicat. They get along with children, other cats and dogs.