One of the most recent additions to the cat fancy, the Savannah cat is a hybridisation of the domestic cat and the African Serval. Its history begins in 1986 when a Bengal breeder by the name of Judee Frank from Pennsylvania crossed a male Serval belonging to Suzi Wood, with a female Siamese cat. The resulting offspring was a kitten who was named “Savannah”. She had the traits of both the Serval and the Siamese. Savannah, an F1 (first generation hybrid) was mated back to a domestic cat, producing a number of litters and proving that she was fertile (it is common for hybrids to be sterile).

A breed profile was written for the Savannah in 1996 by Patrick and Joyce, and the breed was accepted for registration with TICA (The International Cat Association) in 2001 and accepted for championship in 2012. Outcrossing is still permitted with the Egyptian Mau, Ocicat, Oriental and the Domestic Shorthair.

The breed is still relatively rare throughout the world but is rapidly gaining popularity. 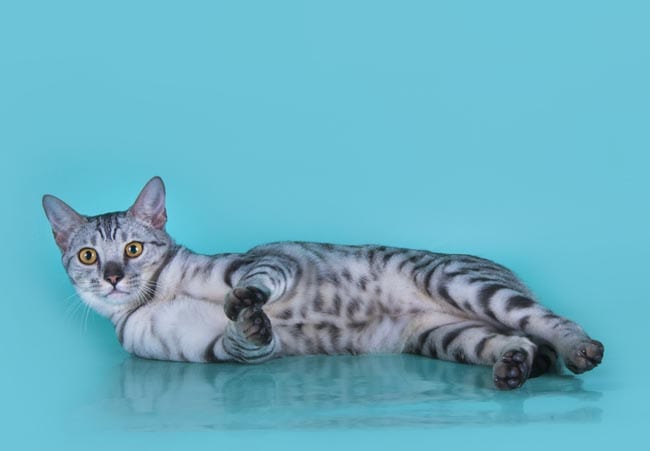 The Savannah is one of the largest breeds of domestic cat. It is often described as a “long and leggy” cat. Tall, lean and well-muscled, the hind legs are longer than the front, with oval-shaped paws.

The small head should form an equilateral triangle and it is longer than it is wide. Tall, wide and round ears which are set high on the head. The eyes medium-sized and should point down, towards the nose, with a round muzzle. One interesting feature is the ocelli on the ears, these are wide bars which are said to mimic the appearance of eyes.

The coat may vary depending on the breeds in that particular lineage, but the background should be gold to brown with bold black to dark brown spots or silver with bold black spots. It is short to medium length and close-lying to the body.

Females are noticeably smaller than the males. 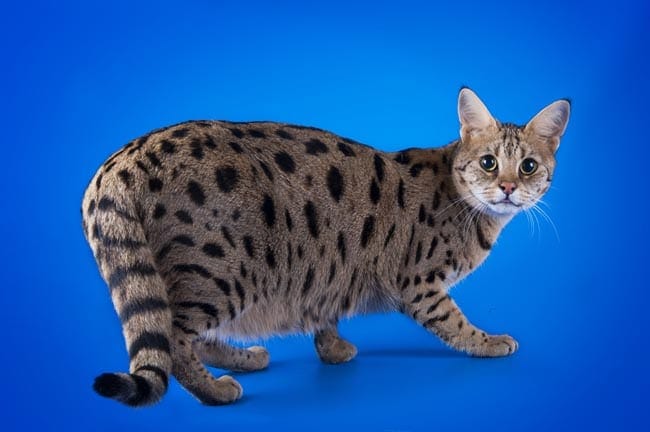 The Savannah is a lively, alert, energetic breed of cat. They are an incredibly intelligent animal and can be trained to walk on a leash and play fetch. They are playful and require a lot of exercise.

Unlike most other domesticated breeds of cat, a lot of Savannah’s love water. Another unique feature is they wag their tail like a dog.

Savannah’s are exceptional jumpers who love to be up high. It is not unusual for them to be comfortably jump 6-8 feet high.

Dog-like in personality, the Savannah loves to follow their owners around the house and help with household tasks.