Witches and cats have had a long-held association and most of us can’t picture a witch without a black cat by her side. But why are cats associated with witches?

Cats became domesticated 8,000 years ago when people settled in the Fertile Crescent, the arch-shaped region that includes the eastern shore of the Mediterranean Sea and land around the Tigris and Euphrates rivers. Along with the grains which the farmers grew came rodents. A symbiotic relationship was formed between cat and man; cats protected precious grain stores by keeping rodent populations down. In return, cats gained protection from larger predators such as wolves.

Documentation of cats began around 2000 BC, Egyptian artists depicted cats in mosaics, paintings, statues and amulets. Between 1500 BC to 30 BC the cat in Egypt was sacred, and several ancient Egyptian feline deities were depicted with cat-like heads such as Mafdet, Bastet and Sekhmet who represented justice, fertility and power. 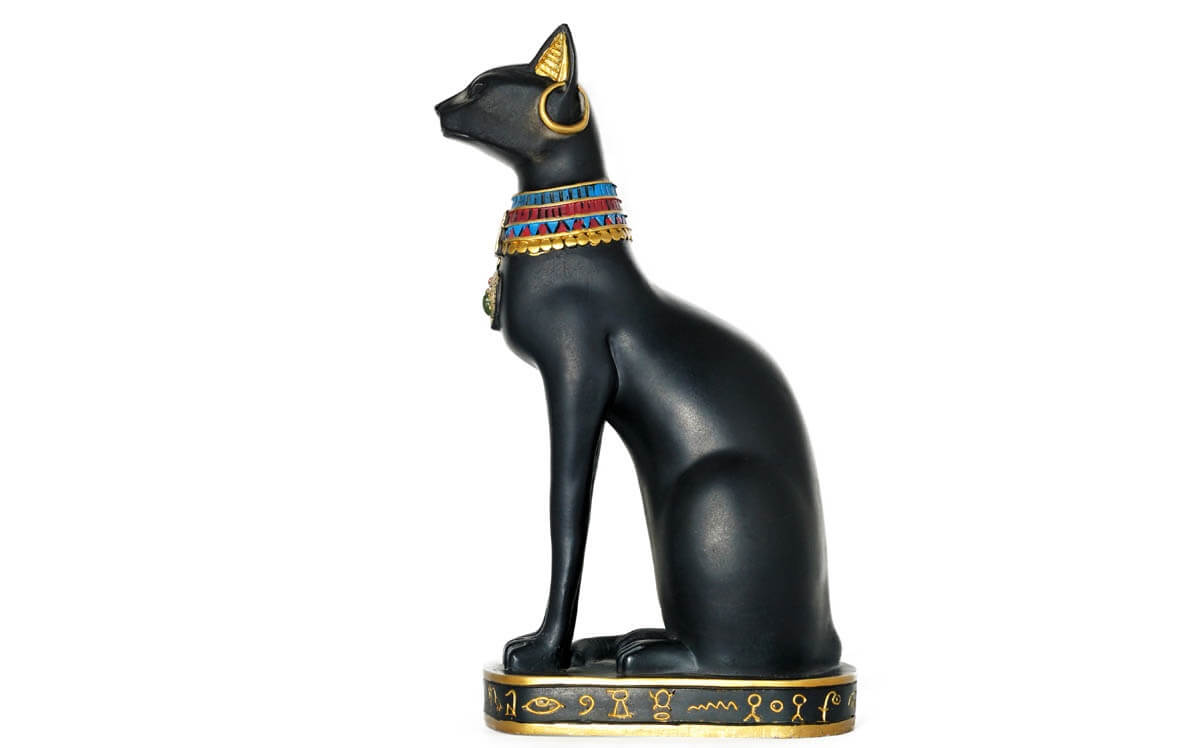 So revered were cats that it was a crime to kill a cat, punishable by death. Hundreds of cats were mummified and placed in coffins for their journey into the afterlife. 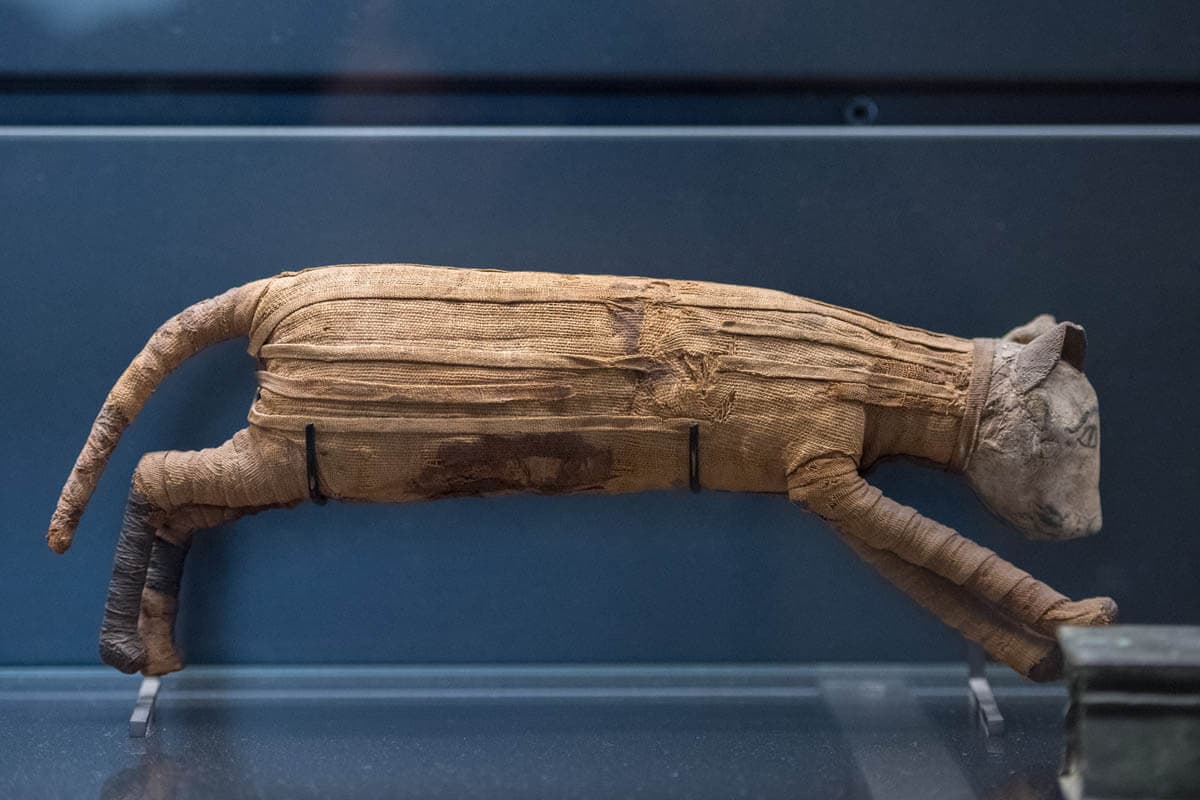 Cat worship went into decline in 390AD after the cult of Bast was officially banned by imperial decree. Despite this, cats continued to be kept as pets and for pest control.

The cat arrived in Europe 3,000 years ago via Greek and Phoenician traders. The Greeks kept cats mainly as pets, and Roman colonisation and conquests brought the cat to Western Europe.

Early Christians didn’t share an appreciation of cats. One theory is that early Christians had a hatred of the Egyptians and everything they found sacred. Bast was still in existence in early Christian Egypt which may have contributed to their dislike of cats. Their independence and nocturnal nature, eyes that glow in the dark, as well as their association with pagans, meant they would become linked to witches and evil. Superstitions around cats included:

Not all Europeans disliked the cat, Hywel Dda (880-950), Prince of Wales was a cat lover who passed a law to protect cats in 936. He argued that an animal with such a high value as a pest controller should be respected and protected in society.

During the medieval period (476 AD – 1492), the Christian church wanted to stamp out paganism and non-Christian (mostly Muslim) beliefs. Crusades were launched against groups and individual people who the church considered dangerous to its teachings. During this period, people became obsessed with the devil, believing his servants, as well as the devil himself, assumed human and animal forms.

From 1184, the Medieval Inquisition was established by the Catholic Church to suppress heresy (beliefs or opinions contrary to orthodox religious-especially Christian-doctrine). Konrad von Marburg, a German priest, began an inquisition in Mainz and reported he had uncovered a satanic cult that worshipped devils in the form of a demonic man and a diabolical black cat.

In response, Pope Gregory IX (1145–1241) established the Papal Inquisition and on June 13, 1233, issued the Vox in Rama to King Henry of Germany. This official papal bull condemned a German heresy known as Luciferian as devil worship and demanded they use all efforts to stop the practice. 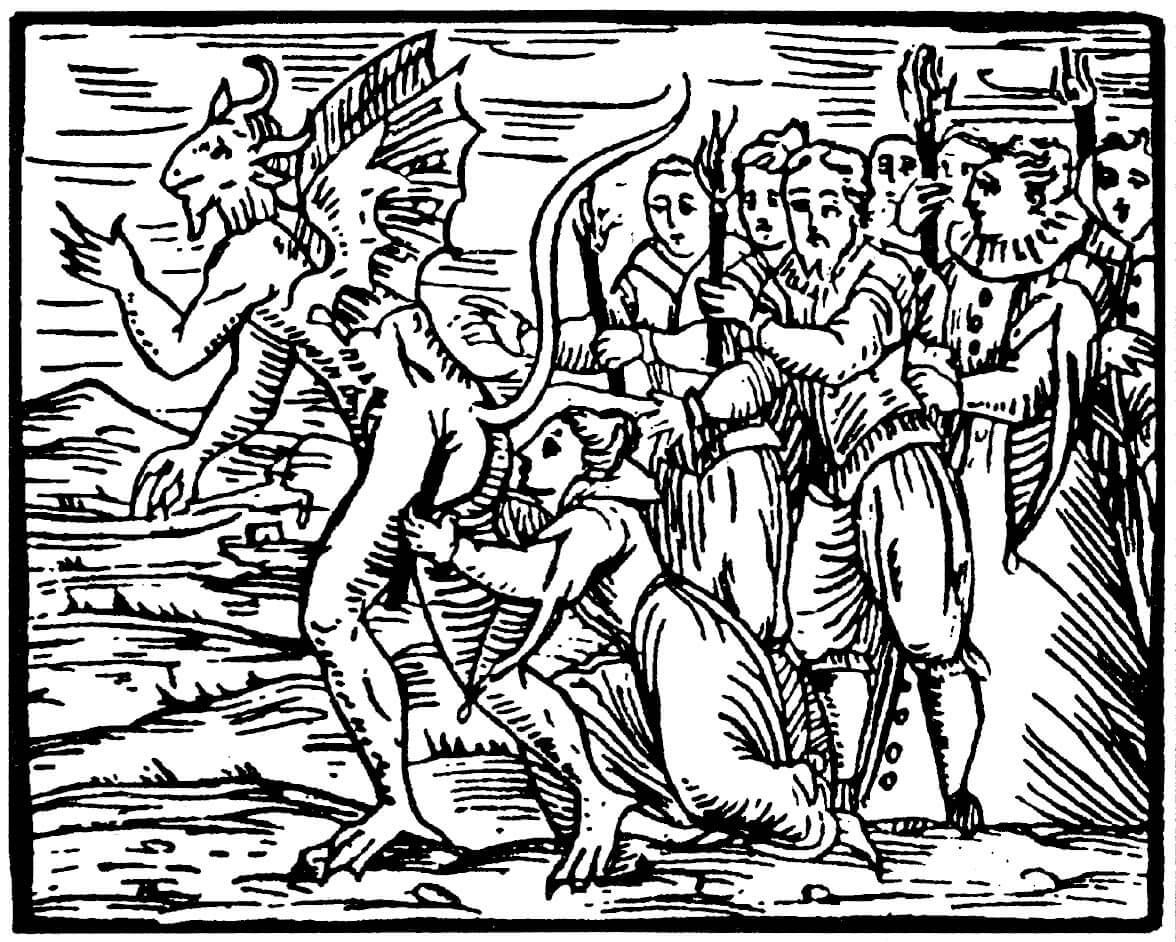 Pope Gregory is also said to have declared a sect in the south of France had been caught worshipping the devil. It is claimed the devil appeared in the form of a black cat and cats became the symbol of heresy. Anybody who displayed compassion for a cat came under the suspicion of the church.

In 1486, Pope Innocent VIII began another round of persecution to eradicate Europe of witches. He pointed to cats as witches’ familiars and issued a decree that whenever a witch was burned, her pet cat was to be burned with her.

The ancient Celts celebrated a harvest festival known as Samhain (pronounced sow-een) on 1st November, which was the pagan end of the year. Samhain give thanks to the pagan sun god for the harvest and to welcome in the new year.  The date was connected with the return of herds from pasture and land the renewal of land tenures. The word Samhain means ‘hallow-tide‘ (holiday).

According to Celtic tradition, the doorways between the world of the living and the world of the dead were open on the eve of Samhain (31st October) and souls of the dead who had died during the previous year could cross into the underworld and spirits returned to the earth. It was believed these spirits communicated with druids (priests) to help them predict the future.  Druids gathered with the Celts to burn crops and animals as offerings to the spirits. They adored the heads and skins of animals in an attempt to contact the spirits.

After the Celtic territory was conquered by the Roman Empire in 43 AD and during the next 400 years, Feralia (the Roman celebration of the passing of the dead), and Pomona (the celebration of the Goddess of trees and fruit) were combined with Samhain.

The Catholic church often took pagan festivals and made them their own, this allowed converts to continue their pagan traditions. The pagan deities were substituted with the names of saints. Halloween was one pagan festival hijacked by the Catholic church. On 13th May, 609 AD, Pope Boniface IV dedicated the Pantheon in Rome in honour of all Christian martyrs and established All Martyrs Day. This was later expanded to include all saints as well as martyrs and moved the day to 2nd November.

The Catholic church later dedicated 1st November as All Souls Day, which was also known as All-hallows in the year 1000 AD. With this new day, people celebrated in a similar way to the Celts but included costumes of angels, devils and saints.

Pope Gregory III (731–741) later expanded the festival to include all saints as well as all martyrs, and moved the observance from May 13 to November 2.”  The church then dedicated November 1st as “All Souls Day,” also referred to as, ” All-hallows,” or “All-hallowmas,” in the year 1000.  Once it became a church holiday, people celebrated in similar ways as the Celts did but the costumes extended to include saints, angels and devils.

Black cats were singled out for the worst treatment because they were associated with witches and the Devil who was believed to borrow the coat of a black cat when he wanted to torment his victims. The Feast of St John took place on 24th June to celebrate the summer solstice, and the Christian church organised burning cats alive ceremonies, black cats were sought out.

Totally black cats were considered really evil in the minds of the pious worshippers. Any touch of white on their black coats might be taken as a sign that they were not, after all, cats consecrated to the Devil. As a result of this distinction, cats that were totally black became less and less common, while those that were all black with a touch of white survived. Religion acted as a powerful selection pressure on feline colouration. This is the reason why today so many black domestic cats have a small patch of white somewhere on their bodies-often on the chest or around the whiskers. This patch, thought to be a sign of innocence, was given the name of ‘Angel’s mark’ or ‘God’s finger.’

Cats, in particular, black cats, were long associated with witches. Some cultures believed that witches could change into cats or that witches could make a witch to cat transformation nine times, which is why itis said that cats have nine lives.

In Greek mythology, Galinthias was a servant of Alcmene, the mother of Zeus’s son, Heracles. Hera changed Galinthias into a black cat (or weasel) as punishment after interfering with Hera’s plan to hinder the birth of Heracles in favour of Eurystheus.

Galenthias came to serve Hecate, the goddess of magic, witchcraft, crossroads, ghosts, necromancy, knowledge of herbs and poisonous plants. She was also known as the goddess of the moon and night.

In 1658, Edward Topsell, an English cleric and author, wrote of cats:

The familiars of Witches do most ordinary appear in the shape of Cats, which is an argument that this beast is dangerous to soul and body.

The reign of terror for witches and their cats was intensified in the fifteenth century and did not decline until as late as the eighteenth. Records show that in the sixteenth and seventeenth centuries, 200,000 witches were legally executed in Germany, 75,000 in France, and 30,000 in Britain. Wherever possible, cats were destroyed with them.

Writers of the day attribute frightening powers to the cat:

Their teeth are venomous, poisonous flesh, lethal hair capable of causing suffocation and infectious breath to the point of destroying human lungs.

When you think about the above from a logical point, some of the above has some medical merit. Bite wounds have the potential to become infected, and the hair can cause allergic reactions in some people, neither of which are the fault of the cat.

On the other side of the Atlantic ocean in the village of Salem Village (now known as Danvers), Massachusetts, witch trials occurred in 1692. In January 1962, Elizabeth Parris (9) and Abigail Williams (11) began having seizures and uncontrollable outbursts of screaming. Local doctor William Griggs diagnosed bewitchment. Additional girls began to exhibit the same signs, and in late February, arrest warrants were issued for Tituba, the slave of the Parris family, along with homeless beggar Sarah Good, and the elderly Sarah Osborn, who the girls accused of bewitching them.

It was believed that witches had animal helpers to do their bidding, and villagers looked out for possessed animals, along with human deaths, two dogs were also killed during the witch trials.

The hatred and killing of cats continued for centuries with some truly horrific acts of atrocity carried out.  By the beginning of the fourteenth century, Europe’s cat population had been severely decimated. Many claim the demise of the cat in Europe allowed the black death (Yersinia pestis) to take hold. In 1346 the Black Death (bubonic plague) arrived in Europe. As cat numbers had declined so significantly, rodent populations increased.

I wanted to write this article to highlight the connection between cats and Halloween, but it is more than that. The horrors cats experienced at the hands of humans goes beyond what I am comfortable with discussing here. I can’t fathom the hatred and vindictiveness of humans towards cats all those many centuries ago.