Mutual grooming (allogrooming) is a common behaviour among many species of animal in which one animal grooms the other. Allogrooming starts immediately after birth when the mother cat (queen) chews the umbilical cord, licks her kittens to stimulate breathing and dry them, then eats the placenta.

The mother continues to groom her kittens for several weeks. This ensures the kittens remain clean, licking the genital region also stimulates the kitten to go to the toilet. Kittens learn how to groom themselves by observing the behaviour of their mother and other cats in the household.

Several studies have been carried out to investigate allogrooming in cats. What has been found is that cats in the wild will remain in a solitary state if food sources are scarce and unlikely to support a group, however, when food is plentiful, cats will form social groups. Social behaviours have been studied in cats within groups which include grooming, rubbing, greeting and sleeping with each other.

Allogrooming occurs most often on the head, and the neck. From a practical perspective makes sense as these are the hardest parts of the body for the cat to groom.

Cats are not the only animals who participate in allogrooming. Horses, vampire bats, primates, birds, fish, large cats and even bees all engage in this behaviour.

Why do adult cats groom each other? 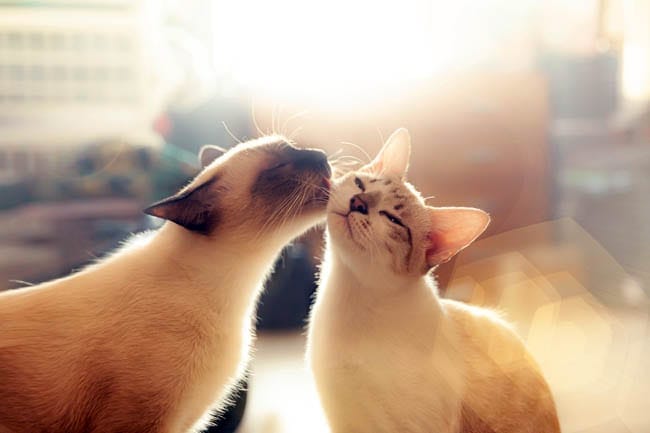 We know it is necessary for the mother to groom her kittens, but adult cats can groom themselves. Several studies have looked into this behaviour and its possible causes.

This is now always a successful way to deflect tension. It is not uncommon for the cat who initiated the grooming to attack the cat being groomed immediately afterwards.

To pass on a group scent

Scent plays a huge role in a cat’s life, and scent is a way to identify familiar cats within a colony and distinguish them from outsiders. Cats accept other cats within colonies but exhibit aggression towards unfamiliar cats who are not members of the colony.

This explains non-recognition aggression, which can occur between cats if one has been to the veterinarian and returns home with an unfamiliary scent. Resident cats don’t recognise the strange-smelling cat and will often hiss or attack the returning cat. Things generally return to normal within a day or so when the smell wears off.

One study by T. M. Curtis found that related cats had a significantly higher rate of allogrooming compared to unrelated cats, but close friendships can form among non-related cats.

What about cats who share a home and don’t groom each other?

Not all cats who sare a home groom each other, every cat is different. Cats can live in relative harmony and not be bonded. Some will show affection in other ways, such as sleeping together or touching noses.