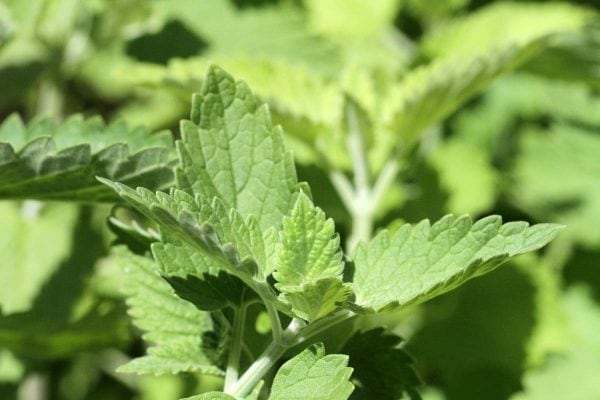 Catnip is a perennial plant from the mint family Labiatae. The green/grey heart-shaped leaves have scalloped edges, the square stems are covered with fine hairs and flowers grow in spikes, reaching 1/2 inch in length.

There are approximately 250 species of flowering plants in the family Labiatae, some of which include:

Nepeta species contain volatile oils, sterols, acids and tannins. The active ingredient that causes a high in cats is the volatile essential oil, nepetalactone, which is present in the leaves and stems of the plant. Nepetalactone protects the catnip plant from phytophagous insects which feed on green plants. Other compounds are acetic acid, alpha, and beta-nepetalactone, citral, nepetalactone, geraniol, dipentene, citronellol, nerol, butyric acid, valeric acid, and tannins.

What does catnip do to cats?

Many cat owners have experienced the effects of catnip first-hand. Cats affected by catnip roll on the floor—which mimics a female in estrus. Nepetalactone targets protein receptors in the cat’s olfactory epithelium located on the roof of the nasal cavity which activates the same neural pathways as sexual pheromones.

Neil B. Todd found 31% of cats are immune to the effects of catnip. Kittens younger than eight weeks old aren’t able to enjoy its effect; in fact, they show an aversion to it. Big cats including lions, tigers, bobcats, jaguars, servals and snow leopards also react to catnip, but it does not affect other species of animal.  Lions, tigers, leopards, servals, lynxes, leopards and cougars also enjoy the effects of catnip. Cats can smell 1 part per billion in the air.

Cats inherit their response to catnip as an autosomal dominant gene, which means the gene only needs to be passed on from one parent.

Four responses have been described when a cat encounters catnip.

Additional responses may include stretching, drooling, jumping, licking, aggression, and hyperactivity. Sniffing produces the high; it is believed that cats chew or eat catnip to bruise the leaves, thereby releasing more of the nepetalactone.

The high produced will usually last between five and ten minutes, followed by a one-hour period where the cat remains unaffected by catnip.

The American Society for the Prevention of Cruelty to Animals (ASPCA) lists catnip as toxic to cats. Large ingestions can cause mild vomiting and diarrhea.

Catnip is easy to grow and makes a perfect addition to herb gardens. You can also grow from seed in early spring after the risk of the last frost has passed. The germination rate can be quite low, it is better to purchase an established plant from the herb section.

Catnip likes light, sandy soil and grows best in full sun but can tolerate part shade. Keep it well watered until it has become established. If growing in the garden, ensure the plants have good air circulation and grow away from tall plants which can create too much shade.

Pinch out the top growth tips in late spring to promote bushiness. If you are planting it in a garden your cat has access to, make sure there is plenty of adjacent space around the plant so that other plants won’t be damaged if your cat rolls in it. Catnip can also be grown in pots, it is important the pot has adequate drainage holes as the plant doesn’t like to sit in water.

If you have catnip in a pot for an indoor cat, have several pots growing outdoors so that you can rotate plants regularly.

You can take leaves from your catnip plant throughout the year. To dry, place in the oven on very low heat or hang upside down in a dry, ventilated area, away from the sun. It should crumble easily when it is ready.

Store in an airtight container in the fridge or freezer.

As an insect repellent

Researchers have found that nepetalactone is about ten times more effective at repelling mosquitoes than DEET, the active ingredient in most insect repellents and also repels cockroaches. This is where the story becomes interesting.  A study out of Japan’s Iwate University and published in ScienceAdvances found that nepetalactone and nepetalactol (present in silver vine) activate the brain’s opioid reward system. Endorphin levels were measured before and after exposure, which found elevated endorphin levels after exposure to nepetalactol. When the cats were given naloxone, a drug that inhibits the cat’s opioid receptors, they were no longer attracted to nepetalactol.

There is a biological advantage to this. When the cat rubs against catnip or silver vine, nepetalactone or nepetalactol transfers onto the fur which acts as a chemical defence against mosquitoes.

Agricultural Research Service (ARS) extracted the key compound—iridodial—from catnip oil. Iridodial has the same chemical structure as the male lacewings pheromone and has been found to attract several lacewing species which control aphids and mites.

Catnip has a mild calming effect on humans which can reduce anxiety, improve relaxation, nervousness and anxiety. Nepetalactone has similar properties to valerian, which is a popular herbal sedative.

Catnip is useful for settling an upset stomach and is consumed as herbal tea. It has been used to treat headaches, scarlet fever, coughing, insomnia, and smallpox. It can also be used for cuts; studies show it has a natural healing quality. Crush fresh catnip leaves, damp them and apply to your wound.

K’Eogh, in his General Irish Herbal (1735) wrote of catnip, “It provokes urination and menstruation: it expels the stillborn child; it opens obstructions of the lungs and the womb and is good for internal bruises and shortness of breath. Drunk with salt and honey, it expels worms from the body.”

According to The Herb Garden, “The root when chewed is said to make the most gentle person fierce and quarrelsome.” There is a story about an executioner who would have to chew on the root of catnip so he could bring himself to kill.

Pregnant women should avoid catnip, as it can induce uterine contractions.

How to give catnip to a cat

Can other plants get cats high?

Yes, catnip isn’t the only high-inducing plant. A recent article in Wired talks about current research which have found three other plants which are capable of inducing a high in cats. None of these plants contains the active compound nepetalactone, but do have similar compounds. Doctor Sebastian Bol, a molecular biologist and a founder of Cowboy Cat Ranch tried these plants out on 100 domestic cats from Southern California cat clinics to try the following plants on their feline subjects.

Some of the cats who didn’t respond to catnip did react to the other plants, 23% of cats responded to catnip, valerian root, silver vine and Tartarian honeysuckle.

Green olives can also send some cats crazy. They contain isoprenoids (also known as terpenoids) which are structurally similar to nepetalactone. I offered an olive to three of my cats, all of whom ignored it. But it warrants further research.

Do cats get a catnip hangover?

No, cats don’t get a hangover from catnip so they can indulge without worry.

No, it is harmful to your cat. Most cats know when they’ve had enough and will refuse any further offers; however intoxication is has been reported.

Can pregnant cats have catnip?

While catnip is safe for most cats, it is a known uterine stimulant and should be avoided in pregnant cats.

How much catnip should I give my cat?

If you are giving him dry catnip, a couple of small pinches will do.

Where can I purchase catnip?

Or you can grow it fresh and dry it at home.

Can humans get high on catnip?

Catnip doesn’t induce a high in humans as it can in cats. It tends to have a sedative effect, instead. As we mentioned above, some claim it produces a high similar to marijuana when smoked.