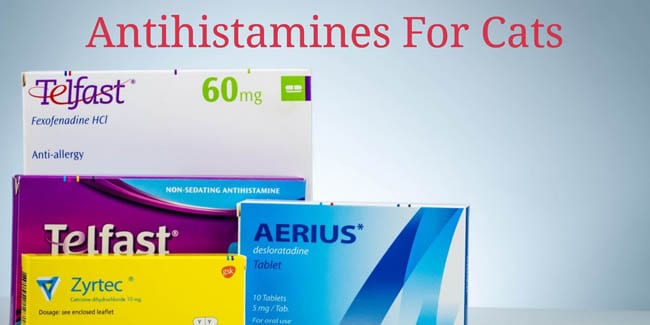 Antihistamines are a class of drugs which block the effects of histamine, a chemical produced by the mast cells and basophils in response to a real (bacteria/virus/fungus) or perceived (allergen such as dust) invasion.

Histamine binds to receptors (docking stations) on specific cells, which trigger several responses such as dilation of the blood vessels, which causes fluid to leak into nearby tissue (runny nose, watery eyes for example) as well as inducing itchiness and smooth muscle contraction, which can lead to breathing difficulty due to bronchodilation.

Antihistamines work by competing with histamine to bind to the receptors on the cells. Interestingly, allergies in humans more commonly produce sneezing, runny nose, and watery eyes whereas cats more commonly develop skin disorders such as itching and rashes.

Table of Contents hide
1 What are antihistamines?
2 Types of allergy
3 Symptoms
4 Diagnosis
5 Dosage
6 Antihistamine trials
7 Other ways to reduce allergies in cats

This may depend on the type of allergy your veterinarian thinks your cat may have,
common diagnostics include food trials and intradermal allergy testing.

Note: Some doses state per kg, and some state per cat.

An antihistamine is administered to your cat for ten days, and his response is monitored. If there is no improvement, he moves on to the next time of antihistamine until a suitable one is found.

Other ways to reduce allergies in cats

Steroids are an effective drug to control pruritis and relieve symptoms. Injectable steroids will be used initially; these can last between 2-6 months. After that, your cat may be given oral steroids. Long-term use of steroids carry side effects, so your cat will either be weaned off if possible or kept on the lowest dose possible. Use a reliable flea control programme too.

Omega-3 fatty acids are essential fatty acids (EFA’s) which cats must consume as they are unable to synthesise them. There are several omega-3 fatty acids, including ?-linolenic acid (ALA), docosahexaenoic acid (DHA) and eicosapentaenoic acid (EPA). Fatty acids can reduce inflammation and the effects of histamine in cats with allergies. Not all cats will respond to omega-3 fatty acids, but they can be of help, especially when used with antihistamines. Anti-itch shampoos and rinses to help relieve itching. Look for products containing oatmeal.