Skip to content
Table of Contents hide
1 About
2 Safe
3 Do not use
4 Why are these antiseptics dangerous to cats?
5 How to treat a wound on a cat
6 When to see a veterinarian 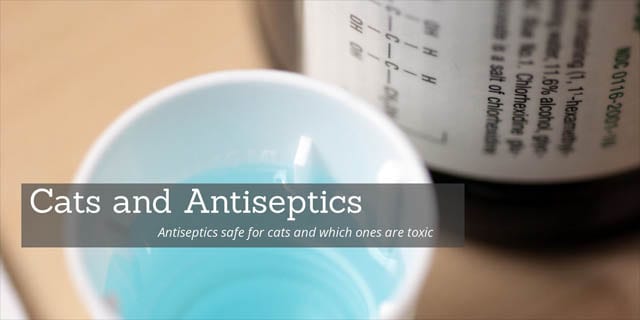 Many well-meaning pet owners assume that anything safe to use on humans is safe to use on cats; however, cats lack the necessary liver enzymes to break down many products which are safe to use in humans. Cats are also at an increased risk of toxicity due to ingesting anything which comes into contact with their coat when they groom.

Antiseptics safe to use on cats include chlorhexidine diacetate or iodine as the active ingredient. The chart below lists antiseptic products and their brand names which are safe for cats along with the dilution rate.

Avoid contact with the eyes when using antiseptics; these are for external use only.

Antiseptics come in several groups, do not use any antiseptics in these categories:

Why are these antiseptics dangerous to cats?

Causes: Damage to tissues and embolism

Essential oils are concentrated compounds obtained from plants. Many of these are highly toxic to cats if inhaled, applied to the skin, or ingested.

Causes: Damage to tissues and toxicity

Also known as melaleuca, tea tree oil is a popular antiseptic with antibacterial and antifungal properties. There are several toxic components in tea tree oil, including linalool, ocimene, alpha-terpinene, 1,8-cineole, terpinolene, camphene. 1,8 cineole is reported to be the major contributor to adverse reactions.

Some reports say that it is safe at a dilution of 0.1 to 1%, but can only be used on parts of the cat he is unable to lick. Even then, I wouldn’t risk it when there are safer alternatives.

Causes: Damage to tissues and toxicity

These coal-tar derivatives are common in antiseptics, disinfectants, and household cleaners. They turn white when water is added. Everyday products include Dettol, TCP, Lysol, and Pine-o-Clean. Phenols are incredibly toxic to cats, who are less efficient at excreting these chemicals.

These products are corrosive to the skin and mucous membranes, resulting in cell necrosis. Accumulation of phenols in the body, through the skin or via the skin, causes liver and kidney damage.

The application can cause burning and inflammation, and damage to the cells can slow down the healing process.

Neosporin contains neomycin, polymyxin B, and bacitracin. It is not labelled for use on cats. Anaphylaxis has occurred in some cats who have received treatments containing polymyxin B.

How to treat a wound on a cat

What you will need

When to see a veterinarian