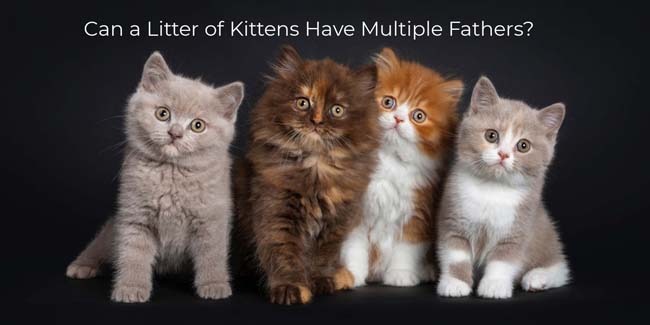 Table of Contents hide
1 Can a litter of kittens have multiple fathers?
2 Is this why kittens in a litter look so different from one another?
3 Can brother and sister cats mate?
4 What happens if a female doesn’t get pregnant?

Can a litter of kittens have multiple fathers?

Yes, this is entirely possible. A queen is in heat (estrus) for  1 – 4 days, during this period she will mate several times, and potentially with several different males.

Cats are what is known as induced-ovulators, which means that the act of copulation induces ovulation. Cats release several eggs per ovulation, and these eggs are released after she mates. All of the female cat’s eggs are released at the same time and survive for 24 hours.  Therefore if she mates with several males, each egg has the potential to be fertilised by any of their sperm (superfecundation). The number of kittens delivered is usually the same as the number of eggs the female cat releases. In theory, a female cat can have a litter of kittens each of whom has a different father.

Is this why kittens in a litter look so different from one another?

Possibly, however,  while kittens can have different fathers, litter mates can look completely different from one another but have the same father.

Can brother and sister cats mate?

Yes, this is possible for feline siblings to mate, as is father and daughter, mother and son. Cats don’t discriminate when it comes to who they mate with. When a female is in the season, she will mate with any available male (well most, some cats can be pickier), which is why it is so important to desex all cats before they reach sexual maturity at around six months of age.

What happens if a female doesn’t get pregnant?

If the female doesn’t get pregnant during a heat cycle (usually because she has no access to a male), she will come back into heat a 1 – 2 weeks later. This cycle will repeat until she either falls pregnant or the season’s change. Cats are seasonal breeders (page 18), and this cycle is tied to the lengthening hours of daylight. So they come into heat in spring and autumn, once the days shorten, her cycles will usually stop, although some cats will continue to go into heat.