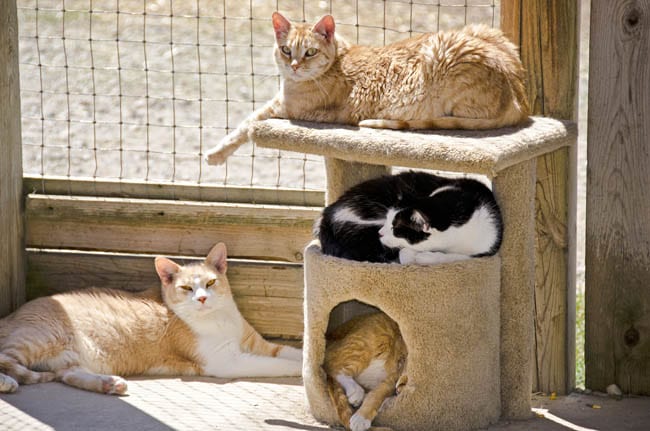 The picture below shows how netting has been put at the top of the fence to stop the cats climbing it and escaping. This has enabled Marianna to give her cats access to the garden, without the use of a cat enclosure. All the work on the garden, play areas and stud house was done by Marianna and her husband.

This enclosed garden was custom designed and built by Rosanne and her husband for their cat Fast Eddie to enjoy the great outdoors while Roseanne and her partner could continue to use and enjoy their garden and outdoor living/entertaining to the fullest.

Many people enjoy designing and building their own cat enclosure. The benefit of this is it is custom designed by you, to suit your individual needs. Once designed, the cat enclosure can either be made by yourselves, if you are handy people, or put together by a carpenter, handyman or builder.

Marianna’s stud has his own specially built house in the garage, photos of his stud house will be included on our “Stud Houses” page, the picture below is his play area which leads off the stud house. This play area has a tunnel which runs across the centre of the garden to a cubby house.

It is enclosed with timber trellis and the cats love it as they can climb up and down the trellis. There’s even a hammock they can only get to by climbing. It’s high enough for the cats to be able to spy on the neighbours. The roof lets through light but is heat and UV resistant.

The shade cloth fernery was originally installed to keep the sun off the house in the afternoon but was converted to a run by the addition of a gate at the southern end. The northern end currently has a cat door into the garage which in-turn is attached to the house via a standard door (no cat door due to the house alarm). From that it has grown to a caged run along the fence which also consisted of two small cubby style house one of which has now been replaced by a large Avery style caged area (as seen in the photo’s). This came about due to a recent addition to the family a Birman by the name of Rascal. There are more plans to redo the backyard which will include some more extensions to the existing run.

Sheila recently sent me the following photos of her cat enclosure along with a description. It measures 32×16 and the area under the house with the latticework is enclosed and has a concrete slab with electrical outlets and warm beds for the wilder ones in the winter. It measures 43×24. They also have an indoor room that is climate controlled. The more tame cats will come into this room. The litter tray consists of a 5×5 ft area filled with cypress mulch and about
10,00 Texas Red Wrigglers. (worms) The cypress kills odours, the worms break down the stool and the whole thing is changed out 3-4 times a year. The old “mulch” is put on to my flower beds. No odours.

Below is the enclosure Jan had built by enclosing her pergola. She had a carpenter do the uprights and attach the wiring. Jan is doing the painting and landscaping herself.

We used treated pine pieces of wood to hold the netting up and then placed shade cloth over about half of the length of the whole cat enclosure (over top of the netting underneath). A hammer drill was used to fasten wooded pieces to the house to use as a bracket for the wire to attach to on the ends of the enclosure and for
the gate to attach to. The furniture was added. Logs, shelves attached to the fence with bookshelf brackets, tunnel made out of leftover wire and covered in leftover shade cloth, and cubby house built at the end with a litter tray in it.

This enclosure was sent by Sarah who says:

They started the platforms based on our ideas and we added on to it.  Without them putting in the platforms we wouldn’t have been able to extend it.  They put in the “v” area and two long walkways.  We put in the steps in the “v”, we added the two major ramps, the walkway above the “v” and the small walkway across to the large shelf.

The ground was cement and we laid marine carpet which can get wet and makes a softer place for them to lie and play.  Also, it stays cooler in summer and warmer in winter.

In hindsight though, we wouldn’t have used shade cloth on the top but rather tinted Perspex to make it reasonably weatherproof.  I hate seeing their little sad faces when it rains and they can’t go into their enclosure.

There are now several companies in Australia (and I’m sure worldwide) who supply and install cat enclosures. Some come pre-made, others are custom made to suit your needs. These are good when you don’t have the time, interest or skill to design and install your own enclosure.

Maurie and Jenny of Funky Cat submitted the following photos of their newly built cat enclosure by D and L Classic Pet Enclosures.

The next enclosure belongs to Helen and is for her Selkirk Rex Hamish.

Elaine recently sent me the following photos of her enclosed deck, built for their lovely Siamese, Alex.