Skip to content
Communication is essential to all species of animal. It lets others around them know how they’re feeling, warns them of danger and is used to threaten or intimidate predators or aggressors.
Cats have several ways they communicate with other animals as well as their human family. Language is just one of them; body language and smell are two other ways. So what are the different ways our cat speaks to the world, and what exactly do they mean? 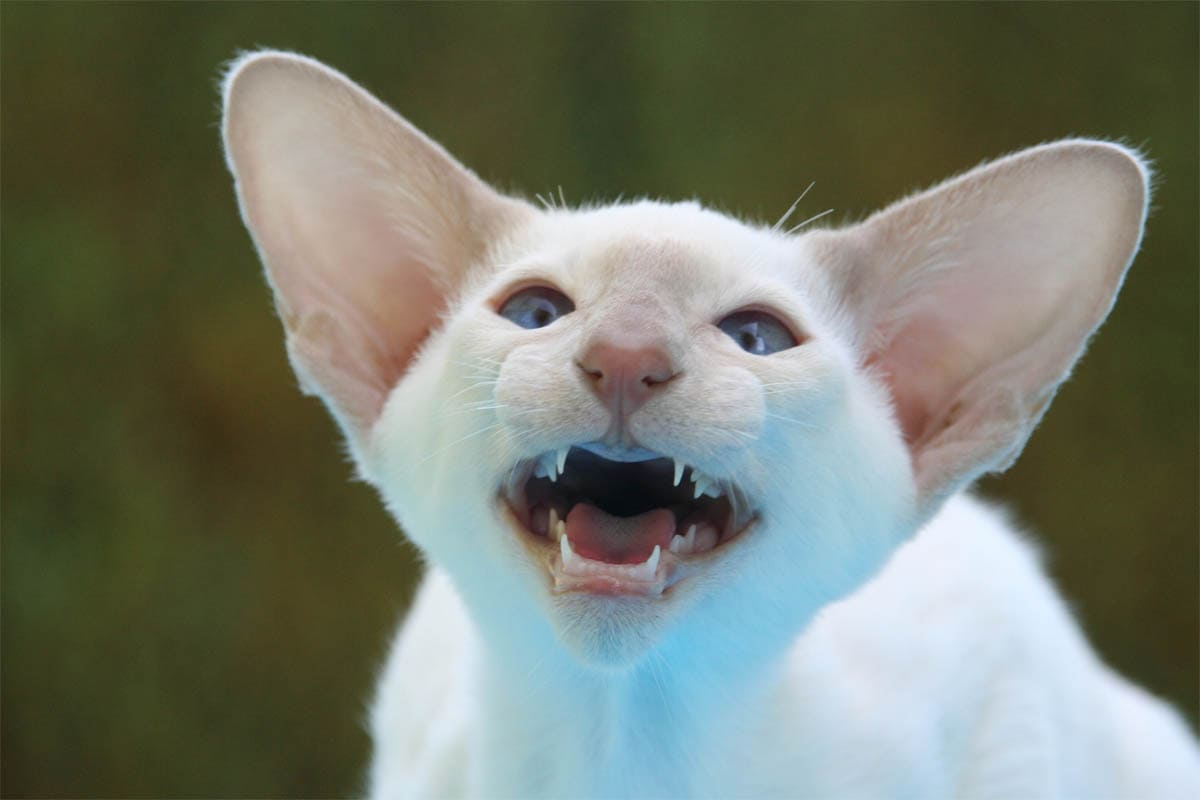 Meowing is the sound most cat owners know best. It’s reserved for humans; cats don’t meow at each other. There are several different meows depending on what your cat is telling you and the situation. We can generally get a gist of what our cat is trying to tell us from the context. For example, if he’s sitting at the back door meowing, he wants to come inside, if he’s sitting next to you as you’re chopping up steak, he wants you to share it with him. You may be welcomed home by a cat running towards you making a cute little chirrup sound. Some cats will meow out of boredom, wanting attention from you (Siamese are notorious for this), and some cats will meow when they are stressed. Look at the situation and other clues your cat may be giving you, and you should be able to decipher what your cat is trying to tell you.

Have you noticed how a cat hissing sounds the same as a snake’s hiss? It is believed that this is deliberate. A snake’s hiss is almost universally feared by all creatures.

A hissing cat is giving you a warning. Leave me alone, or you are likely to be attacked. You will very likely see a change in your cat’s body language at the same time. He may crouch down, eyes wide open and pupils dilated, ears back, which is a sign of a frightened cat. Alternatively, he may be standing tall, his rump higher than his front, ears back, hackles raised, pupils constricted, this means he is angry. Hissing is a warning, back off.

Growling is another sound your cat makes if he is afraid, threatened or angry. Unlike the hiss, which is made with an open mouth, when your cat growls, the mouth will only open partially, the upper canine teeth may be bared. Growling is another warning sign to humans or other animals to stay away. Cats will growl at other cats or animals when they are feeling threatened, and sometimes they will growl when they are in pain. Always approach a cat who is hissing or growling with extreme caution.

Chattering usually occurs when your cat sees a bird out of the window. This is a sign of excitement or frustration. It is difficult to explain the sound; I would describe it as rau-rau-rau very quickly. You will notice when your cat is chattering, the lips are drawn back, and the jaw makes tiny movements, it is believed this is a mimic of the fatal bite your cat inflicts on his pray. Another theory as to why cats make this chattering sound is that they are mimicking the sounds made by birds, possibly in an attempt to trick them.

The lovely sound of a cat chirping, which sounds like a brrrrrupp. This is a sign of a happy and friendly cat.

Mother cats will purr when her kittens are nursing, and kittens purr back. This is to signal all is well, mother and babies are happy and content. Take it as a compliment if your cat purrs when he sees you or is being petted.
Another sign of a contented cat, but purring is much more than that. Cats who are in pain or dying also purr. It is thought that it is a way to self soothe. A purr sounds almost like a motor vehicle idling to me, but much more pleasant.

This is the familiar sound we hear on a night that keeps us awake. The word caterwaul means cat wailing, which is exactly what it sounds like. Most often caterwauling occurs during territorial disputes between cats. That may be between toms fighting over a female in heat or cats disputing physical territories.

Calling is the two-syllable meow which the female uses when she is in heat and looking for a mate.