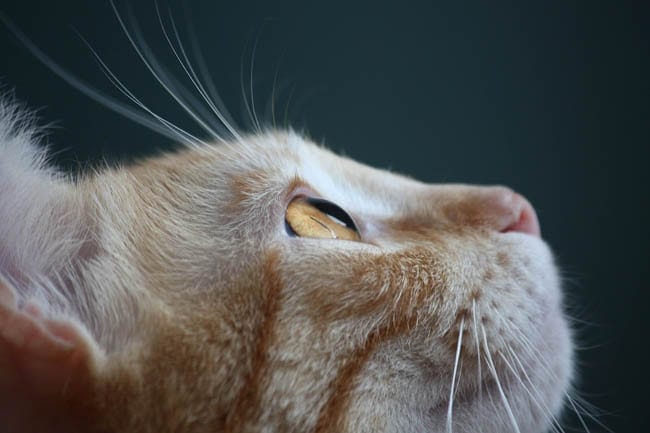 Why do cats scratch around their food bowl?

Not all cats do this. This is an attempt to bury any uneaten food for later. In the wild cats will bury their uneaten food so that other animals can’t steal their “catch”.

Why do cats eat grass?

Grass acts as a laxative and helps with the passage of hairballs through the system. It can induce vomiting, which helps the cat to bring up hairballs and other irritants.

Grass may contain micronutrients which aren’t a part of their normal carnivorous diet.

The exact mechanisms of purring are still not known. People associate purring with a contented and happy cat, and certainly, this is often the case. However, cats will also purr when they are in pain or frightened.

One theory is that purring is a social signal, which sends out the message that the cat is either contented or in need of help.

Why does a cat have whiskers?

Also known as “tactile hairs” or vibrissae, whiskers are long, thick and specialised hairs on the side of the mouth. They are around 2 – 3 times thicker than “normal” hairs and are embedded three times greater than other hairs. Cats have approximately 24 whiskers, 12 on each side. They are highly motile and extremely sensitive and are supplied with a mass of nerve endings. Whiskers can move forward and backward.

Whiskers have several uses. They can detect air currents and vibrations and cats are able to tell the distance and shape of an object in the dark through the use of whiskers. It has been observed that cats who have had their whiskers cut are able to hunt and kill prey normally in daylight but in the dark, they can catch the pray but misjudges where to place the killing bite.

Whiskers are as wide as the cat’s body, therefore act as a guide to tell the cat if it is able to fit into a narrow space.

Whiskers are an extremely important sensory tool for the cat and they should never be cut.

Why do cats sleep curled up? 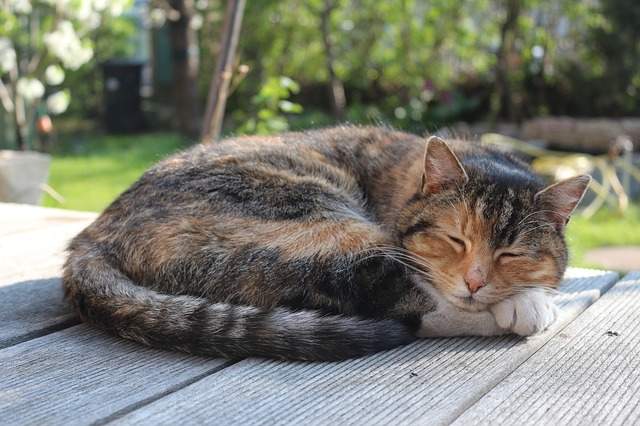 There are a few reasons cats sleep curled up in a ball that I can think of. Firstly, they are protecting their vulnerable internal organs located in the abdomen while they are sleeping (by covering them up),

Firstly, it helps them to keep warm. Think about how you jump into bed on a cold night and curl up into a ball until you have warmed up. Notice how on a warm day a cat is much more likely to sleep spread out as long as possible.

Secondly, they are protecting their vulnerable internal organs located in the abdomen while they are sleeping (by covering them up), secondly (and this is one I am speculating on), it helps them to keep warm. Think about how you jump into bed on a cold night and curl up into a ball until you have warmed up. Notice how on a warm day a cat is much more likely to sleep spread out as long as possible.

Why does my cat vomit on the rug?

Vomiting is quite a physical activity, cats will choose a rug over tiles or wooden floorboards because they have better traction.

Why does my cat knead me with his front paws?

Kittens knead their mum’s belly when they are feeding. This is a sign of contentment to the kitten and also helps the mothers milk flow.

Why do cats chatter their teeth at birds?

Many cats will make quite a chatter sound while they are watching birds or other prey from the window. There are two suggested theories as to why cats do this.

When a cat has caught his prey, he delivers a fatal bite to the neck. It may be that when your cat is watching birds from afar, he is re-enacting that fatal bite.

It has also been suggested that cats make this noise out of frustration because they are unable to get to the prey.

Why do cats rub against me?

Cats have scent glands in their cheeks, lips and at the base of their tail. These scent glands release feel-good pheromones. When a cat rubs his cheeks against you, he is releasing those pheromones onto you, which is the feline way of marking his territory (you). Be flattered, they like you.

Why do cats jump at cucumbers?

We do not know the exact reason but it is thought that their similar shape to a snake is a likely cause.

Do cats have belly buttons?

Yes, all mammals have a belly button including cats. It is hard to find the belly button on a cat, and it looks nothing like ours. It is about 2/3rds down the belly, in the centre and is small, circular and ever so slightly indented.

Do cats go through menopause?

No, cats don’t go through menopause as humans do and female cats can potentially have kittens well into their senior years although litter sizes are usually smaller as the queen ages. The oldest cat to give birth was Kitty, who had her last litter at the grand old age of 30. That is 137 in human years.

Cats do sweat, not as much as other mammals (including dogs and humans). Cats sweat through their paw pads.

Why do some cats suck/chew on clothing?

This is known as pica. The word comes from the Latin word magpie, which is known to eat almost anything.

As to the cause, nobody knows exactly why, but several theories have been suggested:

Researchers do believe that cats do dream.

Why does my cat bring home dead animals?

The school of thought with this one is that our cats think of their owners as somewhat incompetent hunters, and our cat is attempting to teach us how to hunt, as a female cat would teach her kittens.

Another theory is that they’re offering dead animals to us as a gift. It is said that instead of a natural reaction of horror when presented with a dead animal on the doorstep we should heap praise on the cat. None of us wants to be met with horror when giving somebody a gift!

Is it possible for a cat to have identical twins?

Why do cats always make a beeline for people who don’t like them?

Direct eye contact with a cat is a sign of dominance and can be seen as threatening behaviour to our feline friends. People who dislike cats tend to avoid eye contact with cats, thus making them more appealing and “cat-friendly”.

Why does my cat chew my hair?

This is your cat’s way of showing you he loves you, a cat who is chewing his human companion’s hair is grooming him. When cats groom, they transfer their scent onto the other person (cat or human) who is being groomed. This familiar smell is comforting to cats.

Why does my neutered male still try to hump?

I have only experienced this with one cat, our chocolate Oriental regularly mounts our spayed female cat (much to her annoyance). I’m not 100% sure on why, but I to me it seems like he is trying to assert his dominance over her and show her he’s the boss. There is no aggression involved, although the target finds it extremely annoying. She will yowl and run away, only for him to chase her and attempt to mount her again.

Why do cats sit on our clothes?

My cats do this all the time. They have the entire bed to sleep on and they choose to plonk themselves down on the one item of clothing that has been left on the bed. I suspect this goes back to scent again. Our cats love us, and our clothing reminds them of us. If they can’t sleep ON us, they can do the next best thing, sleep on our clothes which smell like us. I have used this when I’ve had a cat hospitalised at the vet. They are often stressed and bringing in an item of clothing (if your veterinarian is okay with this) can be comforting to him.

Why do cats sleep so much?

Cats sleep on average 16 hours a day, which is twice the amount of sleep us humans average. When hunting for food, they use their energy, in short, quick bursts to capture their prey and are highly efficient at this. In his book Cat World, Desmond Morris suggests that cats possibly sleep so much because they have time on their hands and they can.

Why does my cat walk sideways?

We’ve all seen it back arched, tail raised, hair on the back and tail puffed up and doing the sideways ‘crab walk’. This behaviour is designed to make the cat look larger and more threatening to the other cat (or person).

Why do cats have tails? 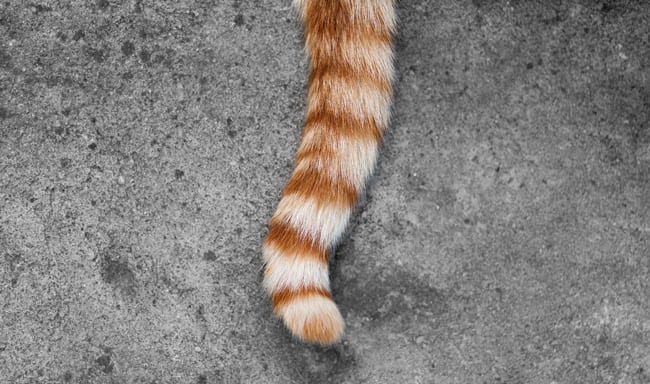 The tail is a part of your cat’s spine and is used for balance and communication. There are between 20-23 bones in the cat’s tail.

Do cats get pimples?

Yes, they do. They aren’t prone to whiteheads like people but can develop blackheads on their chin. This is known as feline acne.

Why do cats bury their food?

This is another behaviour which is a throwback to their wild days. What they can’t eat in one sitting they hide, so nobody else can eat it in the meantime.

Why does my cat always want attention when I’m on the phone?

Your cat doesn’t realise there is somebody on the other end of the phone and thinks you are talking to him.

My cat is chewing/biting his claws, is this normal?

Some cats will bite and chew their claws while they are grooming. This is to remove the outer sheath from the claw.

Nail-biting can become a compulsive behaviour in cats, just as it does in humans, but generally, it is just a normal part of their grooming routine. It is always a good idea to run such behaviours past your veterinarian.

My cat is nursing from herself, should I be worried?

From a personal standpoint, I wouldn’t be worried unless the cat is actually causing physical damage in the process. I had a cat who engaged in this behaviour as a youngster. She would do it when she was stressed or content and it seemed to have a soothing effect on her. Eventually, around the age of 2 years old, she stopped. I liken it to thumb sucking in children. But if you are at all concerned, or if your cat is causing damage to herself, do seek veterinary advice.

How many nipples do cats have?

Cats have on average eight nipples which consist of two rows of four nipples.

Do male cats have nipples?

What is the oldest breed of cat?

The Egyptian Mau who is thought to have descended from the African Wild cat due to their remarkably similar appearance. The African Wild Cats were known to have lived in the same region where the Mau first appeared.