The Chartreux is a rare breed of cat originating in France. They are a large and sturdy breed of cat with a beautiful plush blue coat.

The French Chartreux is one of the oldest domestic cat breeds. The exact origins of the breed are somewhat uncertain. There are several theories as to its origins, most of them suggesting the breed came from the middle east, Russia, Syria, Siberia or Northern Europe.

A type of wool called Pile de Chartreux was imported to France from Spain and it is suggested the cat derived its name from this.

Whatever its origins, the Chartreux became of interest to French breeders in the 1920’s and in 1928 they wrote a breed standard. The Leger sisters of Guerveur Cattery who lived on the island Bell-Ile began selectively breeding these cats. The foundation pair being a male called Coquito and a female named Mariquire. However, the second world war put a stop to this and decimated Chartreux numbers. By the end of the war, the breed barely existed, which was common among other breeds of cats also.

The Chartreux was imported into the USA by John and Helen Gamon in 1970. Some of these cats come from Guerveur lines. US breeders worked hard to keep Chartreux lines pure and due to their hard work, Chartreux lines in the US are some of the purest in the world. The breed was awarded Championship status with the Cat Fanciers Association in 1987.

The Chartreux remains unchanged from that of the champion Mignonne de Guerveur a female Chartreux named the “most beautiful cat” in a 1931 Paris show. This is quite unusual when you look at how other breeds of cats have changed in the past 50 or so years.

A unique naming system is used with the Chartreux where each year a specific letter of the alphabet is used. This runs on a 20-year cycle, as the letters K, Q, W, X, Y, and Z are omitted. So, if your cat is born in an F year, only F names are used. Felix, Fred, Freya etc. This makes it easy to know the exact age of the cat by the letter its name starts with. 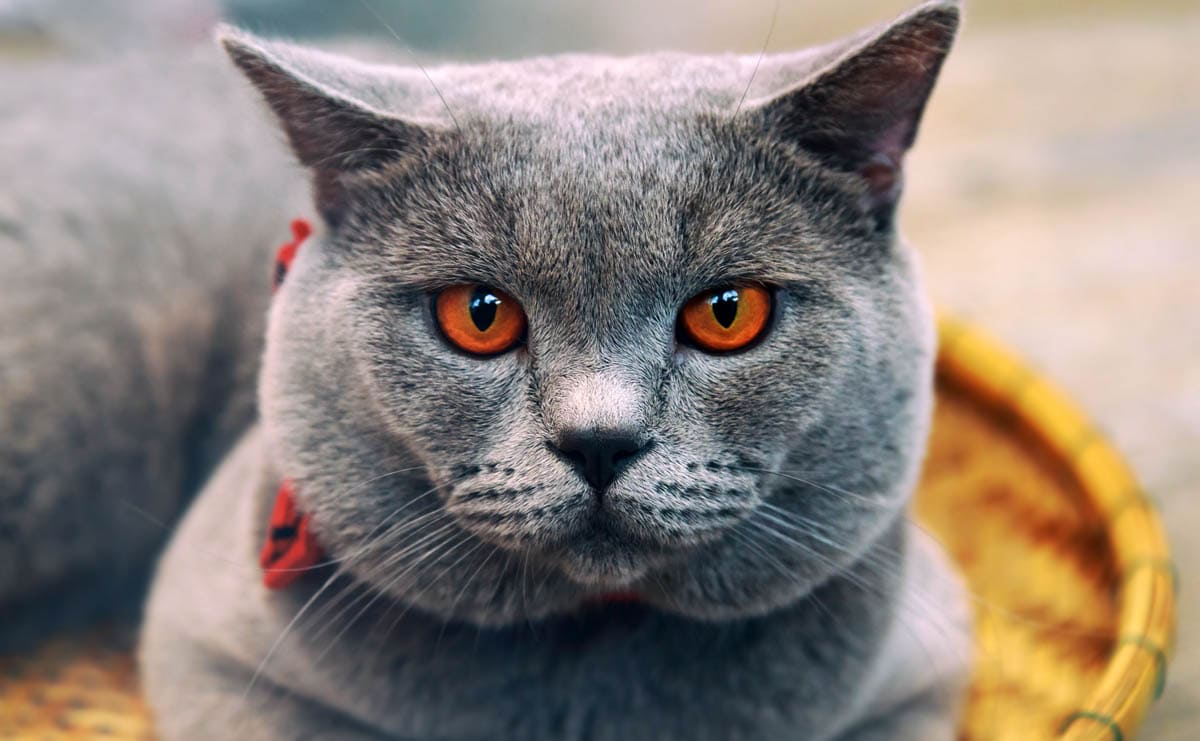 The Chartreux is a medium to large cat with a solid, muscular body. Legs are short and slender with one breeder referring to them as a ‘potato on toothpicks’.

The head is large with a straight nose, large gold to copper coloured eyes that curve up slightly, and medium-sized ears which are set high on the head.

The blue/grey short coat is thick and woolly, the coat should not sit flat on the body. 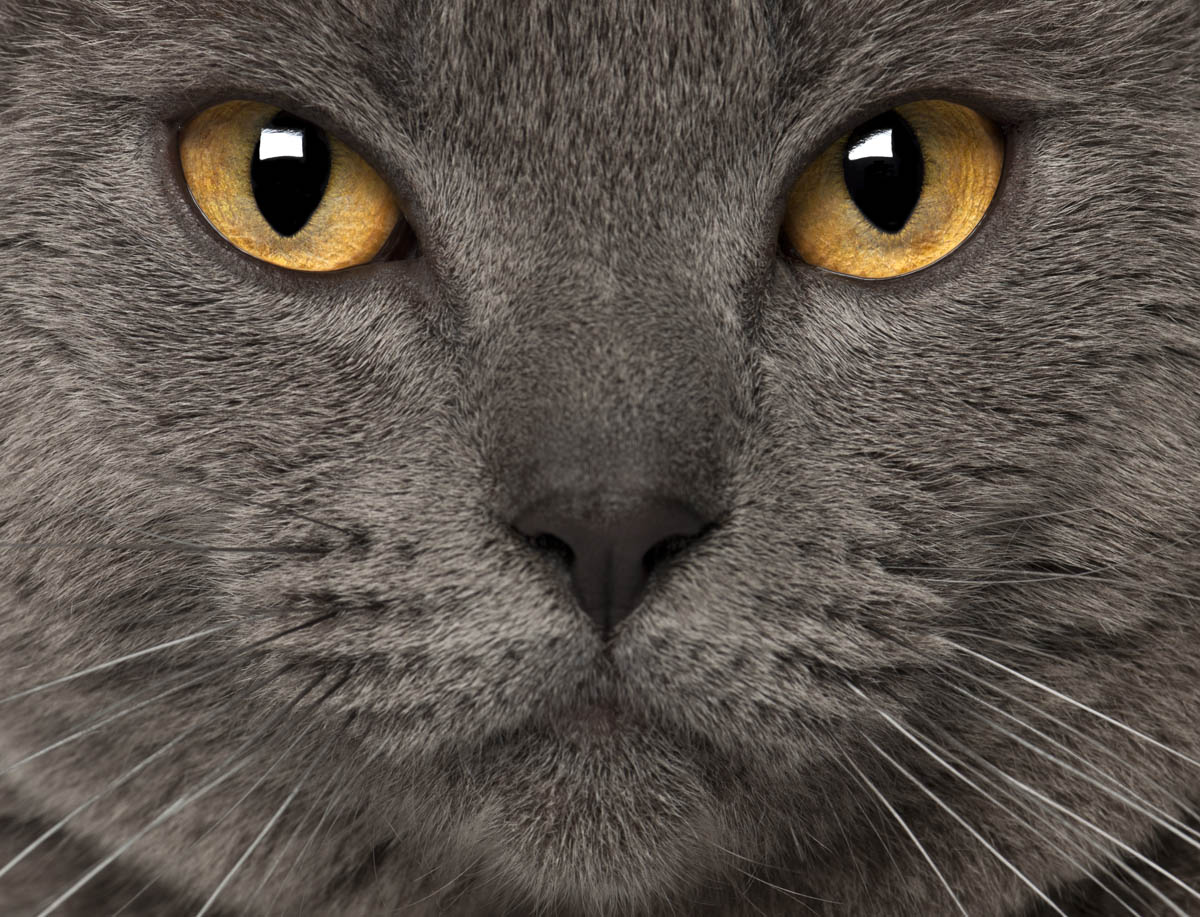 The Chartreux is a friendly and loving breed but they are less intrusive than other breeds, preferring to be near you, but not on you.

They get on well with other cats, dogs, and children, but if something bothers them, they will quietly remove themselves from the situation. It is said that Chartreux are exceptional hunters, with Desmond Morris in his book Cat Breeds of the World, describing them as “characteristically lazy until a rodent appears when it becomes a savage hunter“.

All in all, the Chartreux is a cat of no extremes which makes him all the more appealing. Friendly, but not annoyingly so, playful but not on the go all the time.

Words used to describe the Chartreux include placid, laid-back and good-natured.

Cats should not leave the breeder until they are at least 12 weeks of age and should have had two of their three vaccinations (which should be given at 8, 12 and 16 weeks). Many breeders prefer to sell purebred cats already deseed (spayed and neutered) to avoid backyard breeding.

The Chartreux is easy to care for but requires a brush once a week to remove loose hairs. Trim claws every few weeks.

All cats need to have their teeth cared for. Either with a cat toothbrush and toothpaste (never use human toothpaste on your cat) or by giving them raw chicken necks or human-grade beef chunks two to three times a week.

Annual visits to the veterinarian for a health check-up are necessary.

Is my cat a Chartreux?

Unless you have purchased your cat from a registered breeder and have a pedigree, the chances are that your cat is not a Chartreux. This is still an incredibly rare breed, and most breeders send kittens to their new home already spayed to prevent backyard breeding.

A DNA test may be able to shed some light on the cat’s ancestry, but these tests are still in their infancy and are more reliable for testing for genetic diseases.

No breed of cat is truly hypoallergenic, although some may produce less of the protein Fel D1 in their saliva, or shed less. There is no evidence to suggest the Chartreux is hypoallergenic.

Yes, the Chartreux cats shed, just like all cats.

What is the difference between the Russian Blue and the Chartreux?

The Russian Blue is a finer cat, with green eyes. Chartreux cat has a larger body and a round head with yellow to brown eyes.