What is fever coat?

Also known as stress coat, fever coat is an uncommon phenomenon where one or more kittens are born with a smokey grey coat. Fever coat is said to occur when the mother develops a fever during pregnancy and the unborn kittens(s) are exposed to an elevated body temperature in utero. Stress and certain medications have also been implicated as a cause.

All of what has been written about is purely anecdotal and there appears to be no research on fever coat, presumably because it would be too difficult and unethical to try to recreate.

Affected kittens are born with dark roots and a lighter silver/grey towards the tip. This differs from a smoke cat, who is pale at the roots and dark at the tips. Aside from an unusual coat, fever coat does not harm the kitten and when he or she moults, the adult coat transitions to its normal colour.

Fever coat can develop in kittens of any colour or pattern. In solids, it is an all-over silver-grey often with darker fur on the face, ears and lower legs, while only the black stripes are affected in tabby cats.

What causes fever coat in cats?

Most cases of fever coat appear to be the result of maternal fever during pregnancy which causes incomplete deposits of pigmentation. Extreme stress and medication have also been implicated, however, there is no mention of the type of medications involved. Did the cat require medications to treat an infection or disease which caused an elevated temperature? There are some medications that can cause a drug-induced fever.

One source claims fever coats occur in the offspring of queens with a high fever because the cat’s coat is heat sensitive. This is only true for cats who carry the heat-sensitive Himalayan gene (pointed cats such as the Siamese, Birman, Tonkinese etc), which is a form of partial albinism. The Himalayan gene inhibits the development of pigmentation on areas of the body warmer than 100 – 102 F (37.7 – 38.8). This gene is recessive to the full-colour C gene, which means the cat needs two copies (cc) for the pointed pattern to show up.  One breeder has speculated that fever coat may occur in some cats who carry one copy of the Himalayan gene (Cc). So the cat doesn’t show the pointed pattern but carries one copy of the gene.  It is interesting to note that black cats with fever coats, have darker points on the face and legs.

Another Ragdoll breeder in the same Messybeast article writes that her black and white kitten had a slight fever coat as a neonate, which increased after his second vaccination. There is no follow-up to see if his coat returned to normal.

Does fever coat occur in other animals?

It seems the only other species that can develop fever coat are rabbits and dogs where the same phenomenon occurs. The doe (female rabbit) or bitch (female dog) develops a fever during pregnancy, and the offspring are born with silver coats which change after the first moult.

Other causes of coat colour changes

Fever coat isn’t the only cause of coat colour changes in cats.

Vitiligo is almost the reverse of a fever coat. The cat starts out black, and patches of white fur gradually develop, increasing over time, giving the cat a mottled appearance. The condition occurs when melanocytes (pigment-producing) cells are destroyed by the immune system or die.

Visit Ellie on Instagram to see a beautiful cat with vitiligo

The coat of some cats can develop a reddish-brown hue known as rusting that is caused by diets deficient in tyrosine, an amino acid necessary for melanin production.

Do any cat breeds have a similar coat to the fever coat in kittens?

The Lykoi has a roan coat, which has a similar appearance to the fever coat. Roan is only recognised in the Lykoi and no other breeds. 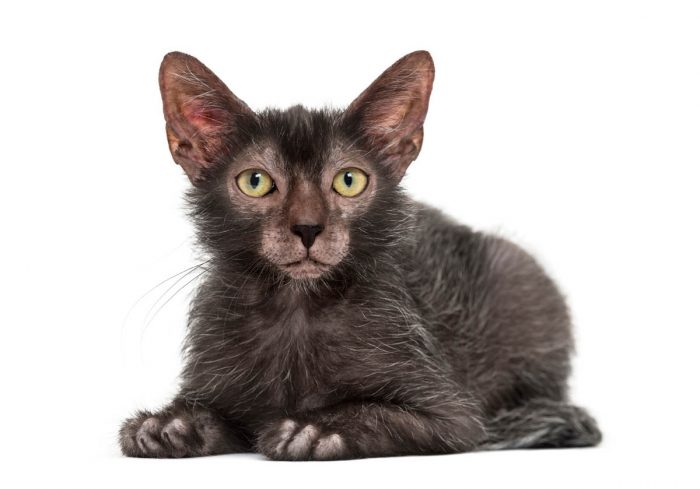 With special thanks to our feature cat Loki who was the inspiration for this article. Loki’s human kindly gave me permission to use his image, and we hope to update you with additional photos of Loki as he grows up and his coat changes.