Halloween dangers to cats at a glance

Halloween is just around the corner and along with it comes risks to household pets as well as cause stress. We take a look at some of the possible dangers to cats and what you can do to ensure they stay safe and happy.

Cats are generally more discriminate eaters compared to dogs, but it is still possible that a cat will be tempted by Halloween sweets (candy) and chocolate. Chocolate is of particular risk because it contains caffeine and theobromine, which are both toxic to cats — the darker the chocolate, the more toxic.

Xylitol is a sugar substitute that is found in several products including sugar-free gum and sweets, peanut butter and toothpaste. When consumed by dogs it causes a sudden release of insulin which can lead to hypoglycemia (low blood sugar), while it doesn’t appear to have the same effect on cats, we cannot be 100% sure, and it is, therefore, safer to keep xylitol away from all pets.

Ingested wrappers can cause an intestinal blockage which can be life-threatening.

Don’t leave Halloween sweets lying around, store them in an airtight container and don’t give sweets or chocolate to cats. There are plenty of safe cat-friendly treats which are safer.

Strings, ribbons, fake cobwebs, balloons can all cause choking and gastrointestinal obstructions if ingested. Linear foreign bodies such as string and ribbon can also become lodged under the tongue while the free end travels down the gastrointestinal tract. The GI tract creeps up the object, which causes them to fold in on themselves, which leads to an obstruction.

Pumpkin itself isn’t toxic to cats and has many health benefits, but pumpkin which has been sitting around for days or weeks can cause food poisoning if ingested.

Don’t leave ribbon and string lying around, and look for non-toxic decorations.

Discard pumpkin displays as soon as Halloween is over and if possible, display them in a part of the house or garden the cat can’t access.

Candles in jack-o-lanterns pose a fire hazard if the cat accidentally knocks it over or can burn the cat if he or she gets too close.

Place jack-o-lanterns out of reach of cats and always supervise cats around lit candles. 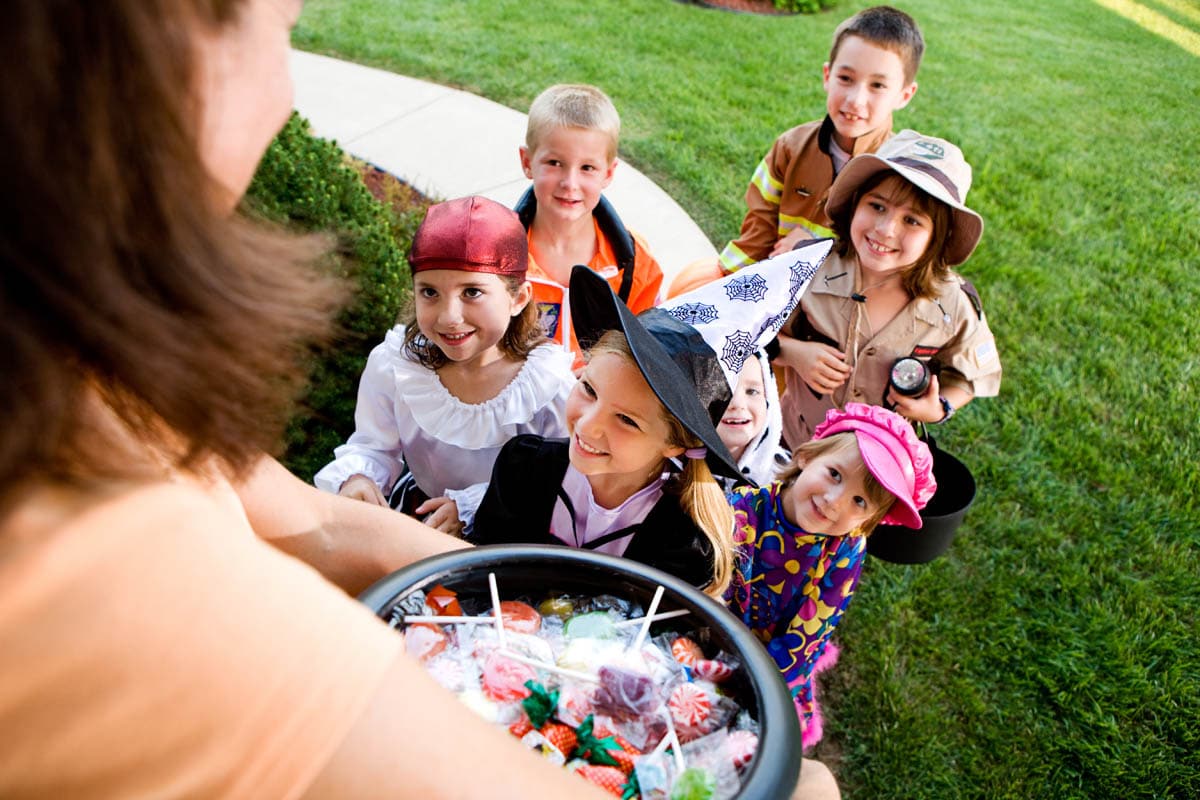 Trick or treaters or visitors generally aren’t a threat but can stress cats out. If people are knocking on the door frequently, there is also an increased risk that the cat can escape.

If you expect trick or treaters or are having a party, set up a room for the cat with food and water bowls and a comfy bed. Put a note on the door to remind visitors not to open it.

Glow sticks contain dibutyl phthalate, which is a colourless, oily liquid with a bitter taste. The Pet Poison Helpline lists glow stick jewellery as mild to moderately toxic. The ASPCA states that one glow in the dark necklace contained 3 ml of liquid which was primarily dibutyl phthalate. A 4 kg cat who ingested the entire contents would consume less than 1/10th of the rat oral lethal dose.

While the risks are low, glow in the dark sticks can cause oral, eye and skin irritation which can cause drooling, gagging and retching.

Never let a cat play with a glow in the dark stick and dispose of it in the outside garbage.

If the cat does ingest some of the contents of a glow stick, rinse the area well with clean water and contact your veterinarian or pet poison helpline.

I am not a fan of dressing up cats unless they enjoy it, which most cats don’t, but if your cat doesn’t mind, make sure he or she is supervised to prevent possible injury from chewing off part of the costume which can cause choking or gastrointestinal obstruction, or getting stuck while trying to remove the costume.

Always make sure the costume fits the cat well and does not interfere with vision, breathing or cut off circulation.

Check costumes before you put them on the cat to ensure there are no loose parts that can easily be chewed off.

Only dress the cat for a short period, and supervise at all times.

Don’t force a cat to wear a costume if he or she doesn’t want to. Planning can help to desensitise the cat. Place one item of clothing on for a short amount of time, repeat over the coming days and weeks.

Are black cats at risk around Halloween?

Some shelters won’t adopt black cats in the period leading up to Halloween for fear of cruelty to the cat.

Interviews with shelter managers and a search of regional newspapers turned up nearly a dozen reports of black cat mutilations over the past four Halloweens. Cat bones and body parts were found near a Teterboro, N.J shelter. In Wausau, Wis., a black cat was shaved, and an occult insignia was carved into its side. A black cat was burned alive in Doylestown, Ohio. In Stanford, Fla., authorities found one black cat beheaded and three others with knife wounds.

Having said that, cruelty to cats can and does occur year-round, which is why it is always safer to keep cats confined indoors. If you do have an inside/outside cat, keep it inside to be on the safe side.