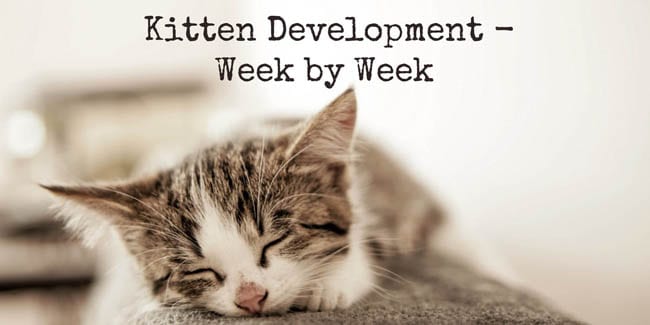 Kitten milestones at a glance

While it is important to keep an eye on the mother and her kittens, too much interference may result in the mother cat moving her kittens to another location.

Cats remain kittens for longer than eight weeks; the aim of this article was to cover the early stages of kitten development.

This is a guide only, as all animals work to their own schedules; however, this does provide you with a guideline as to what should be happening and when.

It is important to keep records of weight; kittens should gain weight steadily and seek veterinary attention if weight gain stops.  Also, be on the lookout for signs of sickness in your kitten. These could include loss of appetite, sleeping alone (at a very young age), rejection from the mother, vomiting, diarrhea, weakness, discharge from the mouth, eyes and anus.