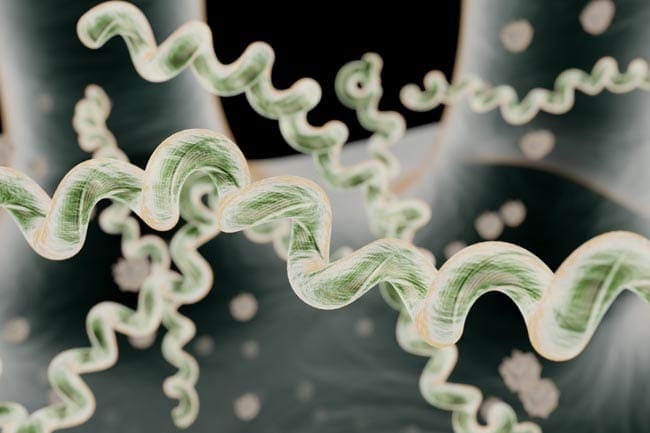 Table of Contents hide
1 What is Lyme disease?
2 Symptoms
3 Diagnosis
4 Treatment
5 Can I catch Lyme disease from my cat?
6 How to reduce the chances of my cat becoming infected?

What is Lyme disease?

yme disease is a tick-borne disease that affects humans, dogs, cats and other mammals. It is caused by a bacteria known as Borrelia burgdorferi. Infection occurs via the bite of a tick, which carries the bacteria.

The deer tick is the most common species of tick to spread the disease, although other ticks can pass it on also. The bacteria live in mammals such as deer, raccoons, rodents and which then spreads to ticks when they feed on the blood of these mammals. They then pass on the bacteria to other mammals when they feed once again.

Lyme disease is most prevalent in the Northern Hemisphere, especially in some areas of the United States. It isn’t as commonly seen in cats as it is in dogs and humans for some reason cats seem more resistant to the disease.

The name originates from the town of Lyme in Connecticut where the disease was first recognised in 1975.

A lot of cats display no signs at all; however, some may develop the following:

Diagnosis can be made via an in-clinic blood test; however, many cats can be infected with the bacterium and display no symptoms. So a positive blood test doesn’t necessarily mean that the cat is sick from Lyme disease. Therefore diagnosis is typically made by presenting symptoms in conjunction with a positive blood test.

Antibiotics are to kill the B. burgdorferi bacterium. Doxycycline is the antibiotic of choice, followed by Amoxicillin. Antibiotic therapy will be necessary for four weeks. Sometimes illness will reoccur and a second treatment will be required.

Anti-inflammatory drugs for cats with polyarthritis.

Can I catch Lyme disease from my cat?

No, it is not possible for a cat to spread Lyme disease to humans; the only way you can become infected is via a tick bite.

How to reduce the chances of my cat becoming infected?

Preventing your cat from roaming outside, especially in high-risk areas. If he does go outside, use an appropriate anti-tick product such as Frontline.

Checking your cat every day for ticks is extremely important. Work your way from the head to the tail, checking all along the body, between the toes, in the ears.

If you find ticks, remove gently with a tick remover or tweezers. To do so, gently grasp the tick as close to the cat’s body as possible and pull. Be careful not to squeeze the ticks’ body as this will inject more blood and toxins into the cat. Once removed, the tick can be killed.