What is tick paralysis?

Tick paralysis is a common and life-threatening emergency which caused when a tick injects neurotoxins into its host. Hundreds of species of tick exist worldwide, and as many as 40 species are capable of producing paralysis.

Ixodes holocyclus (commonly referred to as paralysis ticks) is the most important species in Australia. These ticks live on the east coast from North Queensland to Northern Victoria. They can be found year-round, however, are most prevalent in early spring and summer.  Their natural hosts are the long-nosed bandicoot and the short-nosed bandicoot, but they can also parasitise other native animals including the possum, wallaby, and echidna, all of whom have a natural immunity to the tick’s toxin. The preferred habitat of ticks is areas of bush and scrub but they can also inhabit gardens, parklands, and paddocks. If the opportunity arises, paralysis ticks will feed on domestic pets, livestock, and humans.

The appearance varies between species, below is an image of the Ixodes holocyclus tick, located in Australia.

Life cycle of the paralysis tick

Ticks have four stages (moults) of life and require three hosts (either the same or different species) to complete their lifecycle, dropping off their host and re-attaching during each moult. The amount of time this take is dependent on the environmental temperature. The tick is capable of injecting a neurotoxin into the cat during the larval, nymph, and adult stages; however, the largest amount of toxin comes from the adult female.

How do paralysis ticks get onto cats?

Stimuli such as heat and movement alert the tick to a potential host, it climbs onto vegetation, and when an animal passes, it waves its forelegs (known as questing) until it makes contact with the host.

What do paralysis ticks do?

Only the adult female tick who attaches to animals; however, some male ticks parasitise the female tick. As the tick attaches to the cat and borrows her mouthparts into the skin, she injects saliva, which contains several compounds that help the tick to bypass the host’s natural blood clotting ability so she can feed for several days. This includes anti-clotting agents, antiplatelet agents, and vasodilator, which relaxes the blood vessel walls.

The saliva also contains a neurotoxin-a toxin which acts on the host’s nervous system-which causes paralysis by disrupting the connection between the nerves and the muscles. Not only are the muscles responsible for movement affected, but also those responsible for blinking, swallowing and breathing.

The tick is small when she attaches to her host, growing in size as she consumes more blood, a fully engorged tick can be as large as 10mm (1/4 inch). Toxic effects don’t occur quickly, as they do with snakes and spider bites and clinical signs can take 3-5 days to develop after attachment.

Ixodes holocyclus symptoms develop between 3-5 days after the tick has attached.

As symptoms progress, you may notice:

Remove food and water as poisoning can prevent the cat from swallowing, which can lead to choking and go straight to the veterinarian. Call ahead if possible to let them know you are on your way.

The longer the delay in treatment, the worse the outcome.

The goal of treatment is to counteract the effect of the toxin as well as provide supportive care.

Recovery is dependent upon the severity of symptoms and how quickly treatment commenced. Generally, veterinary treatment takes two-plus days. It will be necessary to care for your cat for some time after discharge from the hospital.

Keep the cat inside for at least two weeks after discharge from hospital. 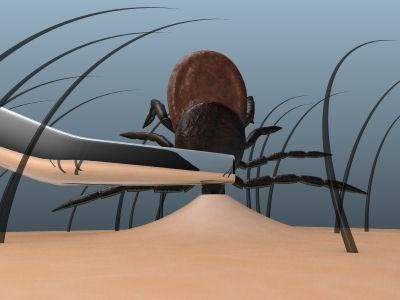 Wear latex gloves when removing a tick. Using tweezers or a tick remover, which you can purchase these for a few dollars from your veterinarian, firmly grasp the tick’s head, as close to the cat’s skin as possible and pull gently to avoid leaving the mouthparts embedded in the skin. Be extremely careful not to squeeze the body of the tick as this will inject more poison and pathogens into the cat’s system. You can also kill the tick while it’s still on the cat by using an appropriate insecticide, such as Frontline spray.

After removal of the tick, there will be a crater where the head was; this will remain for several weeks. Watch for signs of infection.

Even after the removal of a tick, your cat can still develop symptoms associated with tick poisoning, and careful monitoring of your cat will be necessary.

Once removed, save the tick by placing it in a jar of methylated spirit or alcohol so you can take it to your veterinarian for identification.

Checking a cat for ticks

Start from the tip of the nose and using the tips of your fingers, work your way right down to the tail. Ensure you check between the toes, inside the ears (be careful), and skin folds. Go against the grain of the fur and don’t forget to check underneath collars. Ticks will feel like small bumps on the skin. Common locations include the head, neck, front legs and groin.

Can indoor cats get ticks?

Yes, it is possible that ticks can be brought indoors on clothing or on other pets (usually dogs) who go outside.

Tick preventatives can reduce the risk, but they are not 100% fail-safe. It is important to check pets once a day for ticks (even those on a preventative).

Avoid letting your cat roam in the native bushland.

What is Lyme disease, and does it affect cats?

Lyme disease is an infection caused by a bacteria known as Borrelia, which is transmitted via tick bites.

Although it has yet to be proven that the paralysis tick passes on Lyme disease to cats in Australia. Lyme disease is passed on via the Deer Tick, also known as the Black-Legged tick (Ixodes scapularis) in North America. You cannot catch Lyme disease from your pet, but humans can become infected from ticks.

Is there a tick vaccine?

The University of Queensland has created a vaccine and is seeking to engage with animal technology companies to co-develop the vaccine.