Signs of labour in cats

The cat’s uterus (womb) has two horns, which come together with a central uterine cavity. The cervix is at the end of the uterine cavity and is closed during pregnancy. Developing kittens lie within the horns and are attached to the mother via the umbilical cord. The umbilical cord is attached to the placenta, which joins the mother and kitten together. The role of the placenta is to transport nourishment from the mother and to take waste away from the fetus (unborn kitten).

During the last week of pregnancy, place the kittening box in a warm, quiet, draft-free room (this is important as newborn kittens are unable to regulate their body temperature for the first three weeks of life),. The room should be off-limits to children and other pets. She should be encouraged to sleep in this box.

Food, water, and a litter tray also need to be placed in this room.

Line the nesting box with old newspapers—which can easily be changed—or an old blanket. Make sure that the blanket isn’t going to snag the kittens’ claws.

If the mother fails to chew the umbilical cord, you will have to do this. Tie a piece of dental floss around the cord no closer than 1 inch from the kitten’s body and snip it with a pair of sterile scissors. Be careful not to pull on the umbilical cord while doing this as it could result in an umbilical hernia.

Use the infant nasal cleaner to remove debris from the mouth and nose if necessary.

The kitten usually crawls towards a nipple and begins to nurse which helps to stimulate the uterus to contract, assisting with the delivery of the next kitten. If the kitten hasn’t moved to a nipple and begun to nurse, carefully place the kitten on one of her nipples. 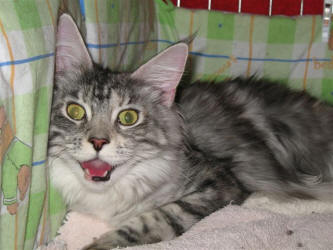 During labour, the queen pants.

Once born, the queen breaks open the sac that the kitten was born in. 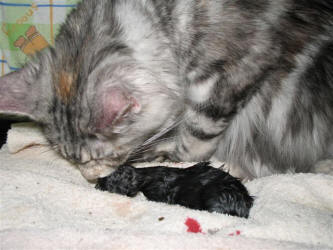 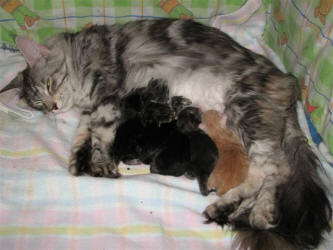 Once the kitten is cleaned up, the queen will push it towards a nipple. Contractions will resume, and delivery of the next kitten will usually happen between ten minutes to an hour after the delivery of the previous kitten.

All in all, it may take between 2 – 6 hours to deliver a litter of kittens.

There can be a significant gap between kitten deliveries which is known as interrupted labour. The queen will cease straining and attend to the kittens she has delivered by cleaning and nursing them. She may eat some food, if it is offered, and will appear to have completed labour. After a period of rest (interrupted labour may last as long as 24-36 hours), labour will resume, and the rest of the litter will be delivered. It would be worth speaking to your vet if no kittens have been delivered in four hours and you suspect your queen may have gone into interrupted labour.

When to call a veterinarian

There are many possible problems your queen may encounter during birth to cover in this article. A week before the due date, take the cat to the veterinarian for a final check-up and discuss the birth and potential problems. The vet will be able to advise what is ‘normal’ and what requires veterinary attention.

How involved should you be?

The majority of cats are quite capable of giving birth without assistance, take a backseat and do not interfere unless a problem occurs.

Too much involvement can be stressful for the queen. Allow her to give birth to her kittens and care for them as newborns as undisturbed as possible.

How soon after giving birth can a cat go into heat?

It is possible for a cat to go into heat, mate, and become pregnant within 6-8 weeks of giving birth.