Sphynx at a glance

The Sphynx cat is an almost entirely hairless cat that originated from Toronto. The skin has a delightful chamois feel due to the presence of soft down hairs giving it a fuzzy peach appearance.

Sphynx cats have a reputation for being the clown of the cat world, with a curious, outgoing and friendly personality they get along with everyone.

The Sphynx cat has a mutation of the KRT71 gene. Other hairless cats have cropped up from time to time throughout the world as a result of this spontaneous mutation. Hypotrichosis is the condition that causes hairlessness and is due to a recessive gene, which means both parents must carry the gene to pass it on to their offspring. 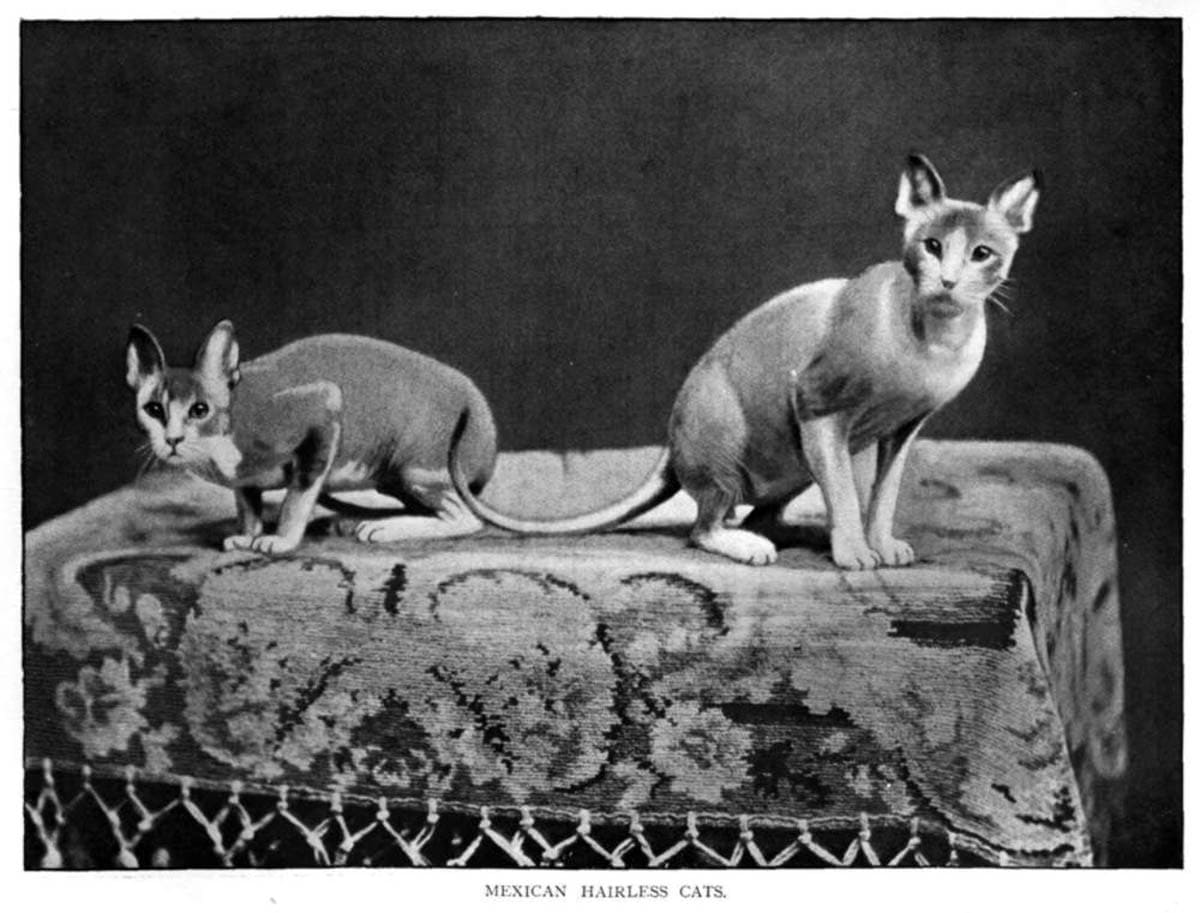 Two hairless cats named Nellie and Dick were given to Mr and Mrs F.J. Shinick in 1902 by local Indians, these were named Mexican Hairless cats. Other hairless cats have turned up in Australia, Europe, and the United States. It is not known for sure if these spontaneous mutations are all the result of the same gene, three hairless conditions have been looked into, occurring in France, Canada, and England, and symbolised by h, hr and hd, respectively. It is believed to be closely linked to the Devon Rex gene re. [1]

The Sphynx story began in 1966 in Toronto, Canada. A black and white domestic female by the name of Elizabeth gave birth to a hairless male kitten, named Prune. A local science student became interested in this unusual cat, and along with his mother Yania Bawa, a breeder of Siamese, obtained both Prune and his mother, Elizabeth. Prune was mated back to Elizabeth, and this mating produced more bald kittens.

A breeding programme was planned to mate these bald cats to American Shorthairs. The CFA granted these cats new breed status, however by 1971 the status was revoked due to fertility concerns. Unfortunately, these lines eventually died out.

Sphynx in the US:

A farm cat from Minnesota by the name of Jezabelle and owned by Milt and Ethelyn Pearson gave birth to a bald female kitten who was named Epidermis. The following year Jezabelle had a second hairless kitten, named Dermis. Epidermis and Dermis were sold to Oregon breeder Kim Mueske to establish a breeding programme.

Meanwhile, back in Toronto, three more hairless cats were found by cat breeder Shirly Smith on the streets. Bambi a male who was neutered, the two females, Paloma and Punkie were sent to Dutch breeder Dr Hugo Hernandez. Hernandez mated Punkie to Mewsi-Kal Starsky (who was from the original Canadian lines originating from Elizabeth/Prune). These matings produced no kittens, so Hernandez then mated Punkie to a Devon Rex named Curare van Jetrophin. The resulting litter produced five kittens. Two males from this litter (Q. Ramses and Q. Ra) were used, along with Punkie’s half-sister, Paloma.

The descendants of these matings, along with the descendants of the Minnesota line (Dermis and Epidermis) went on to become the foundation cats of the Sphynx we know today. Domestics, American Shorthairs, and Devon Rexes have been used in breeding programmes to increase the gene pool.

The Sphynx isn’t a completely bald cat but has a fine layer of peach fuzz on the skin. Some hair may be present on the nose, tail, ears, and feet. Sphynx cats have no whiskers. Wrinkles are a desired trait in the Sphynx. Due to the minimal hair, the Sphynx feels surprisingly warm, which feels similar to a chamois.

The medium-sized body is long but with excellent muscle definition. It has a deep chest and legs which are in proportion to the body. Hind legs are slightly longer than the front legs. They have medium-sized, oval paws and a long, tapering tail. Sphynx cats have huge ears, broad at the base.

The head is wedge-shaped with rounded lines. There is a slight nose stop. The eyes are large and slightly slanting with the outer corners pointing towards the ears.

The Sphynx comes in every colour, pattern and eye colour.

The Sphynx is an extremely outgoing, friendly and loving breed of cat. They love to climb and be up high and are always on the go, but are also happy to cuddle up with their human family. Part cat, part dog, part monkey is used to describe the Sphynx.

Sphynx cats get along well with people, including children and other pets and like to be a part of what is going on, all the time. Due to their intelligence, they are easy to teach, often learning tricks and happily walking on a leash. The Sphynx cat thrives on human companionship, therefore it is advised you only adopt a Sphynx if there is somebody home most of the time. If this is not possible, consider a second cat for company.

The Sphynx cat is an overall healthy breed of cat, but as with all cats, there is a higher incidence of certain conditions which include:


In some ways, the Sphynx is more high-maintenance than other breeds as they produce more ear wax than other cats and can be prone to oily skin and require a weekly bath. If your Sphynx cat’s skin becomes too dry, reduce the frequency of bathing or speak to your cat’s veterinarian about a cat-safe moisturiser to use.

Only ever use a veterinary-approved gentle shampoo designed for cats on your Sphynx. Human shampoos contain harsh chemicals which are not suitable for a cat’s sensitive skin.

Hairless cats are just as prone to fleas as cats with fur, and regular flea and worming treatment are necessary to keep your Sphynx parasite free.

Lack of hair also increases the risk of sunburn in Sphynx cats, therefore it is recommended your Sphynx remain indoors or have access to a sheltered and shaded cat enclosure. 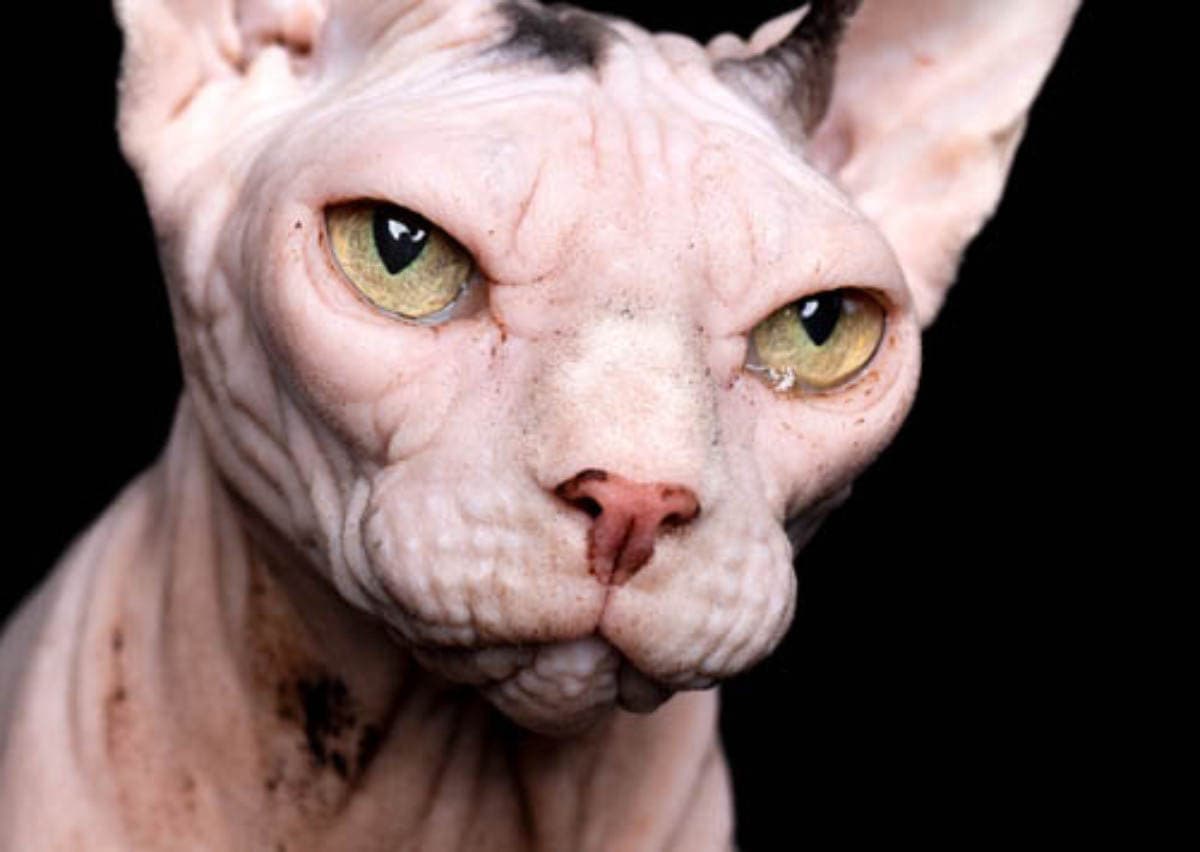 All cats need their teeth cared for with daily brushing using a cat toothbrush and toothpaste (don’t use human toothpaste on cats).


A yearly visit to the veterinarian is essential to ensure your Sphynx remains healthy and well, progressing to bi-annual visits once your cat reaches seven.

No, the Sphynx cat does not smell.

Why are Sphynx cats so popular?

There’s the element of the uniqueness of having a hairless cat, some people like the idea of less hair around the home and many people adopt the Sphynx because they are allergic to cats.

No, the protein (Fel d 1) responsible for allergies in humans is in the saliva and sebaceous glands of all cats. Admittedly, due to the lack of hair, there is no shedding, but they still shed skin and peachy fuzz into the environment.

Despite the name, the Sphynx cat is not Egyptian, they originated from Canada and the United States of America.

As a rule, if the home is cold enough for you to need to wear socks, it is recommended you put some clothes on your Sphynx for warmth.

Can you breed a Sphynx cat with a normal cat?

Most breeders sell their Sphynx cats already desexed, that aside if a Sphynx cat mated with a normal cat, the offspring would have fur. The gene responsible for hairlessness is recessive, and both cats would have to carry the gene for the kittens to be hairless.