Somali cat at a glance

The Somali is a longhaired Abyssinian cat with a beautiful ticked coat and a long plumed tail. They have the same personality as the Abyssinian being outgoing, energetic, confident, good-tempered and affectionate.

The Somali is a long-haired Abyssinian and originates from Abyssinian breeding programmes where occasionally a litter of Abyssinians would throw a longhaired cat. It is not known how the longhaired gene ended up in the Abyssinian gene pool.

Back to the Somali, the gene responsible for long hair in the cat is recessive, and the cat needs two copies of the gene to have long hair. A cat can have short hair but carry the recessive gene for long hair. Mated to another short-haired cat who also carries the recessive longhair gene and the offspring can be born with short or long hair. In the past, these longhaired Abyssinians were sold as pets, but at a later stage, breeders decided to develop these cats and establish a new breed.

This all started with Evelyn Mague, an Abyssinian breeder. In 1967, a male kitten was born who was named George. George was the result of a mating between Trill-By, owned by Charlotte Lohmeyer and Evelyn’s stud, Lynn-Lee’s Lord Dublin. In this litter was a fuzzy male who looked like the odd longhaired Abyssinian that occasionally cropped up in the breed.  Charlotte gave this kitten away.

At the time, Evelyn also rescued cats, one day a lady turned up on her doorstep to surrender a cat to who she had become allergic. This cat was George. As he had not been around other cats since he was a young kitten, and didn’t get along well with Evelyn’s cats. The kindest thing to do was find him a new home.

Evelyn felt it very unfair that these beautiful longhaired cats were so devalued and decided to show and develop them. There was considerable resistance to the development of the Somali breed initially.

The Somali Cat Club was formed in 1972 and the breed was exported to Europe in 1977 where breeding programmes were established. Back in the USA, Somali’s were awarded championship status with the CFA in 1978. 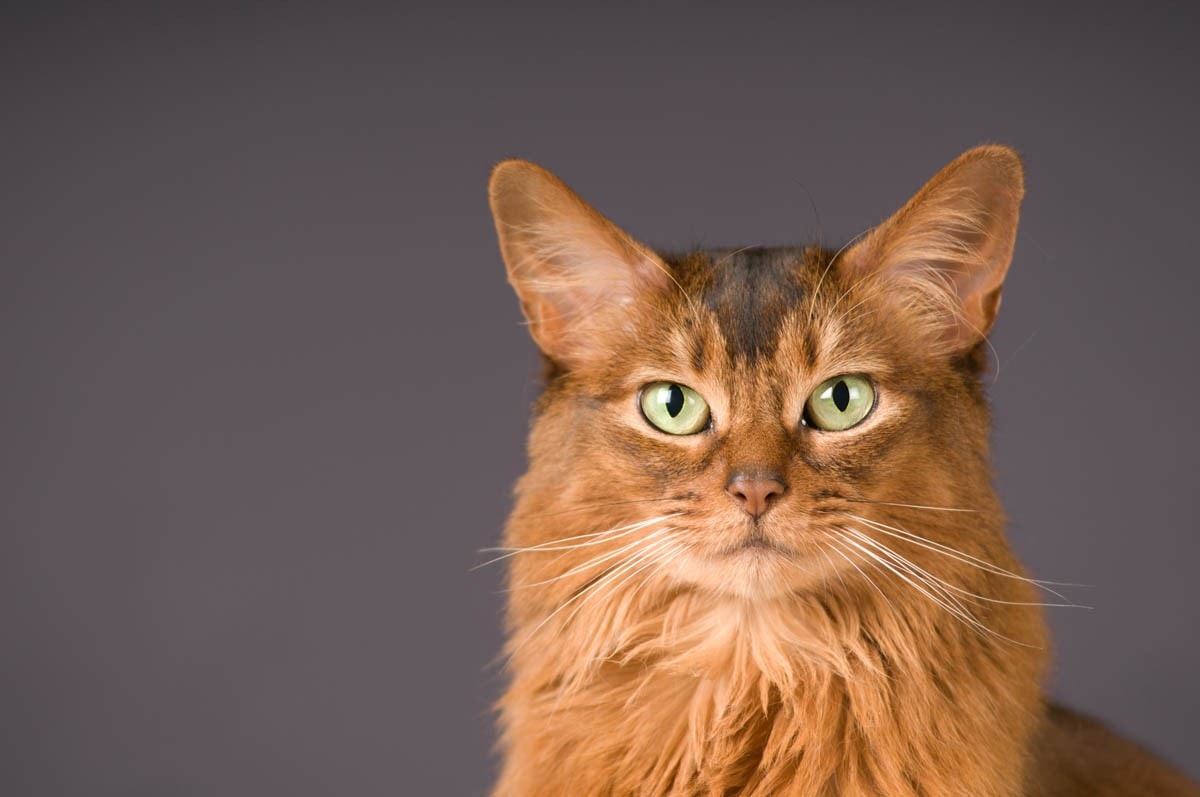 The Somali has a similar shape to the Abyssinian with a medium body and well-muscled with slim legs, and small oval feet. The head is broad, with almond-shaped eyes and low-set ears.

The Somali has a medium-length, soft, and silky coat, medium-length that can take up to two years to fully develop. There is a large ruff around the neck and a thick plumed tail, earning the breed the nickname fox cat. All Somalis have ticked coats, which means each hair the base colour is interrupted by two or three bands of darker pigment. The tip of the hair is always dark. Coat cat colours include red (sorrel), blue, fawn and silver.

The Somali shares the same personality as the Abyssinian and are an extremely active breed of cat who loves to be up high.

Somalis are extroverted, gregarious, charming, inquisitive, who are on the go all the time. This is a breed that is great fun to share a home with, loving to be with their human companions and help in whatever you may be doing. They do not do well if left for long periods of time on their own.

Their intelligence makes them an easy breed to leash train, which is a good thing as their inquisitive nature can get them into trouble if they are allowed to roam outdoors.


The coat is relatively easy to care for and requires only a 5-minute groom once or twice a week to get rid of loose hairs.