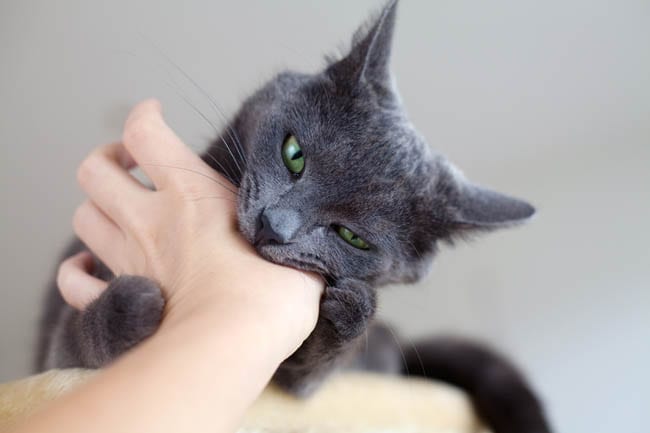 What is play aggression?

Play aggression is most often seen in kittens and adult cats under 2 years of age. As frustrating as it can be towards their human companions, play aggression is quite normal in kittens. This type of aggression is predatory in nature and is commonly seen among littermates. Not only does it provide exercise for the kittens but also serves as a way to practice and learn hunting behaviour which in the wild is a necessary skill to learn.

Table of Contents hide
1 What is play aggression?
2 Why do kittens bite?
3 How to deal with play aggression in cats
4 What are some good toys for my kitten?

When kittens engage in this play hunting behaviour with their littermates, if they take it too far with a bite or a scratch they will be quickly put in their place by a littermate or their mother. They quickly learn bite inhibition (also known as a soft bite) as well as batting without claws. Kittens who leave their mother and littermates too early don’t get this vital socialisation and are much more likely to engage in inappropriate play aggression. Another reason why it is important to leave kittens with their mother until 10-12 weeks.

Bites are more than just painful, they are potentially dangerous. Cats have a huge number of bacteria on their teeth which are injected into the skin during a bite, which can cause a skin infection or a painful abscess. Scratches can cause cat scratch disease.

How to deal with play aggression in cats

The best way to deal with this type of aggression is to redirect it towards a more appropriate source such as cat toys. Ensure you provide your cat with adequate toys in which to explore his predatory behaviours such as wand type toys (on a rod, with a feather at the end of some string) to chase and soft toys to attack.

Spend 30-60 minutes per day actively playing with your kitten, this provides an outlet for excess energy and you can direct the play fighting towards appropriate toys. In the wild, cats hunt, eat groom and sleep. Try to mimic this by playing with your cat and then feeding him. Let him play with his chosen toy, allowing him to pounce on it, before pulling it away, we all know cats love to play ‘cat and mouse’. Make him work for his ‘prey’, but don’t frustrate him by never allowing him to pounce on it. Towards the end of the play session, let him catch and kill the prey. This mimics what would happen in the wild. Feed him as soon as he has finished playing.

If your kitten is attacking you during petting, learn to read your cat’s body language. Before an attack his eyes will be wide, tail swishing and the ears may be back and flat on the head. This is the time to stop petting.

Often cats will ambush you as you walk down the stairs, or hide around a corner ready to pounce on you. If your cat jumps out at you, use a noise deterrent (such as a whistle) to startle the cat. Put a collar with a bell on your cat, giving you a better chance of hearing your cat before it startles you. Use remote punishment as a way to discourage your cat from attacking. Some ideas for remote punishment include a water gun or alarm.

This is particularly important if you spend a lot of time out of the house. Two cats will play together, sleep together and keep each other entertained.

Hitting or smacking a cat will not discourage play aggression, in fact, it may make the situation worse. It also serves to make your cat fearful of you. If your kitten attacks you, say a firm “no” or better still, hiss at him, and stop interacting until he has calmed down.

What are some good toys for my kitten?

There’s an endless variety of toys on the market for cats. Toys which give your cat the opportunity to stalk, pounce and attack are the best. My cat’s favourite toy is Da Bird, I have had great pleasure watching them play with this toy. Cheaper options include ping pong balls, old cotton reels (with the cotton removed), empty cardboard boxes, empty toilet rolls, basically anything that your cat can interact with. We also have an article on keeping indoor cats happy.