How many bones does a cat have?

The average cat has between 240 – 245 in its body, this may vary a fraction as some cats have slightly more or fewer bones in their tail and, or additional toes (polydactyl). Male cats also have a bone in their penis.

Names of bones in the cat’s body 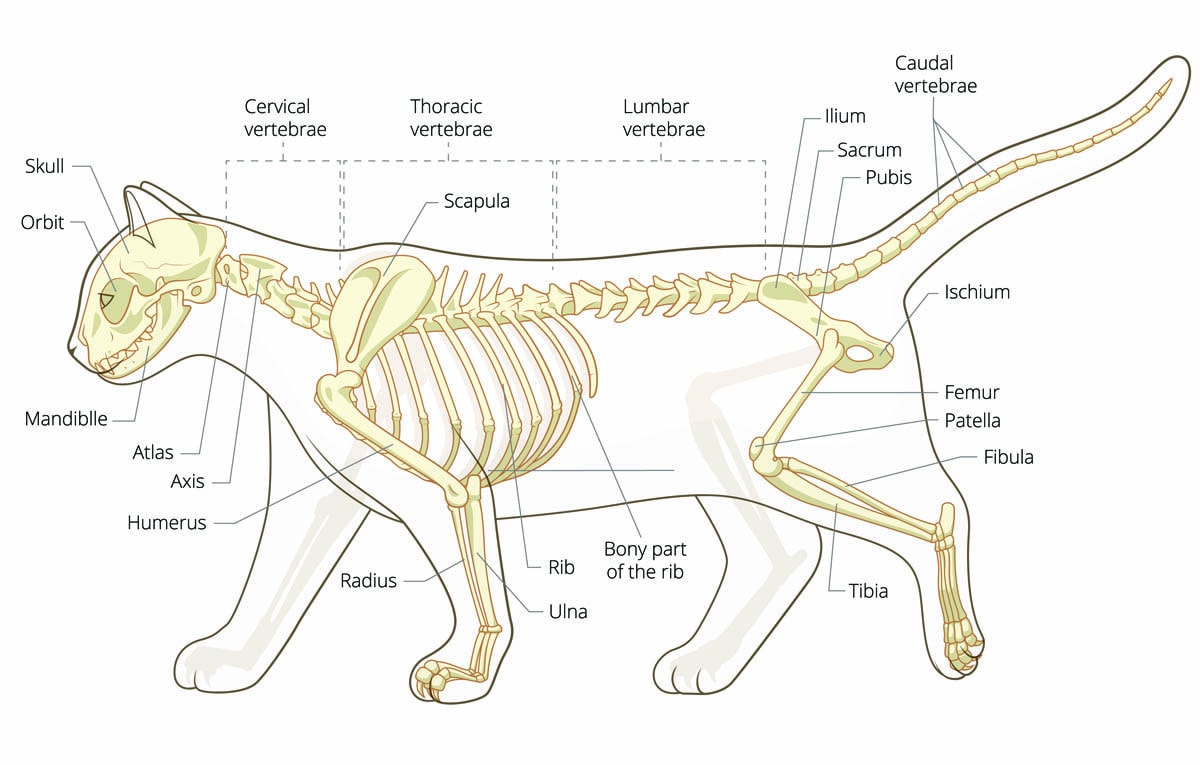 More about the cat’s skeleton

The skeleton is the internal framework of your cat’s body consisting of the bones, ligaments, and tendons. It can be broken up into sections known as axial, visceral and appendicular.

Furthermore, bones can are classified by their shape.

What do the bones do?

Certain bones may also provide additional functions such as the tail which is used for balance and communication, the ear bones to assist with hearing and the penis bone, which helps the male keep a prolonged erection.

Head – There are 29 bones in the cat’s head. The feline head can be loosely broken into the skull, face (eyes, nose, cheeks) and jaw. The thick skull bone protects the cat’s delicate brain; other bones include the jawbones (mandible and maxilla), nasal bones, cheekbones and eye orbit. 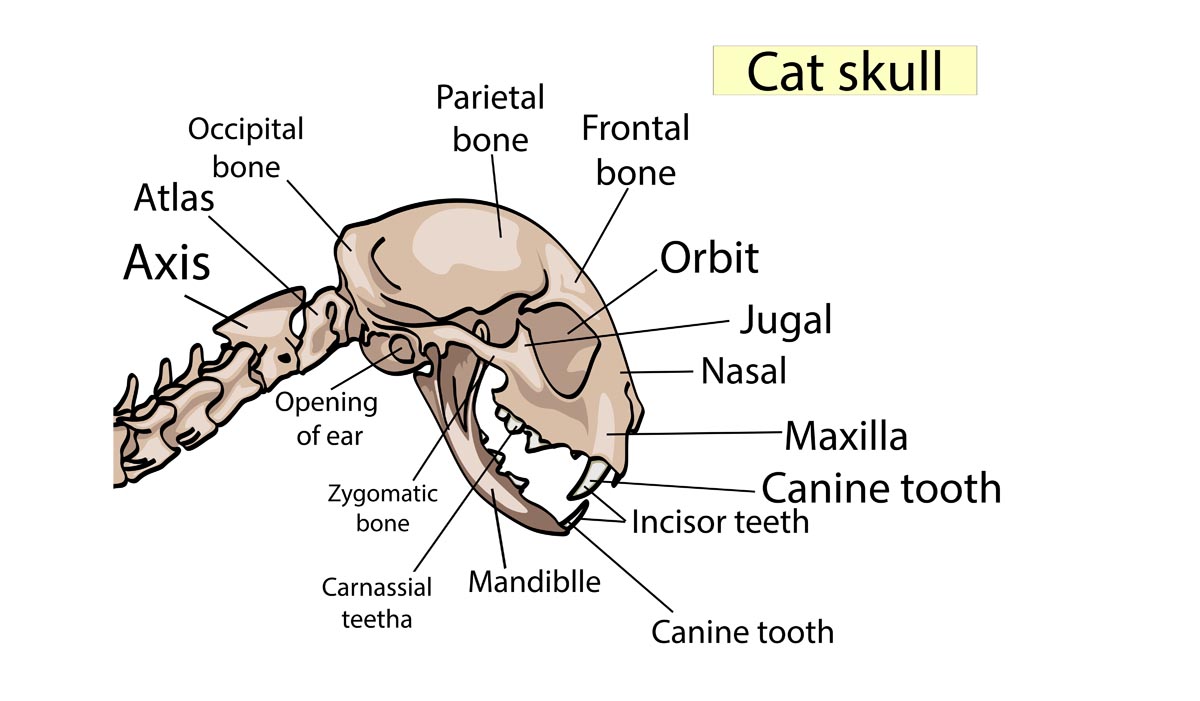 Neck and spine (vertebrae): These bones run along the upper part of the cat’s body from the skull to the tail. There are 7 neck bones, 13 backbone, 3 sacral bones and 20-23 tail bones. The cat’s vertebrae are not as tightly connected as that of the human, with much greater elasticity in the disks between the bones, making it much more flexible.

Ribs: The ribs surround the chest cavity on either side; there are 13 pairs of rib bones in the cat.

Shoulders (scapula): The scapula is not attached to other bones; it is held in place by muscles.

Pelvis: The pelvis is divided into two halves, each containing three bones, the ilium, ischium, and the pubis.

Sternum and clavicle: Also known as the chest bone, the sternum is a flat bone in the chest protecting the heart and lungs, the ribs connect to the sternum via cartilage. The clavicle attaches to the sternum and shoulder blades in humans; however, in cats, this tiny bone is located deep within the chest muscle. This makes the cat’s chest much narrower and deeper than other mammals, increasing the length of his stride and allowing him to squeeze into narrow places.

Wrists and /ankles/heels: Connecting the legs to the feet on the foreleg are the carpal (front legs) and tarsal (rear legs) bones.

Toes: Cats have five toes (phalanges) on the front (foreleg), one of these toes is the dewclaw which sits higher up on the foot and does not come into contact with the ground. There are four toes on the rear (hind leg). Each cat toe has three bones, the distal, middle and proximal phalange. The cat’s claw is attached to the distal phalange. Cats are digitigrade, which means walk on their toe (unlike humans who walk on the flat of the foot). When a cat is declawed, the claw along with the distal phalange is amputated. Some cats have additional toes, known as polydactyly (or Hemingway cats). Certain breeds are more prone to this including Maine Coons and Bobcats.

Tail: The final section of the vertebrae, the cat’s tail consists of between 20 and 23 bones.

Throat: The throat contains an unusual bone called the hyoid. Its principal function is to anchor the tongue; it is also believed that it helps lions produce their characteristic roar and in domestic cats, their purr.

Penis: The male cat has a small bone in the penis (as do many mammals), this allows the penis to remain hard during copulation, meaning he can do so for extended periods.

Inner ears: Known as ossicles, these tiny bones of the inner ear help to amplify sound.

Disorders of the bones