Nothing attracts more opinion than pregnancy. All of a sudden everybody is an expert on your health and welfare, and that extends to pet ownership.  Every year a considerable number of cats are surrendered to shelters because a new baby is on the way or has arrived, and the parents worry about the risk the cat poses to the child. Most shelters are desperately overworked and underfunded, and this just adds to their burden.

Many well-meaning people told me to get rid of my cats before my first child was born. People are fearful that cats will smother sleeping babies, however, despite a great deal of research, I was only able to find two cases, one a conflicting story of Kieron Johnson, who was purportedly smothered to death and one in a near miss, as covered in the British Medical Journal. It was later determined that Kieron Johnson died from SIDS.

Can a newborn baby be around cats?

Yes, as long as they are supervised. Never let the cat sleep next to a baby under 12 months.  There is a lot of research to suggest that children brought up with pets in the first year of their life have a lower incidence of respiratory tract illness.

New parents need to take precautions, some ways to keep baby safe include:

Can a cat suck a baby’s breath?

No, it is not possible. This myth began centuries ago when cats were associated with witches. A publication in the Annual Register dated 25th January 1791 notes the following:

A child of eighteen months old was found dead near Plymouth; and it appeared, on the coroner’s inquest, that the child died in consequence of a cat sucking its breath, thereby occasioning a strangulation.

Three hundred years ago, SIDS was unheard of making it reasonable to assume that if a cat was found near the baby’s body, it was blamed for the death. We now know babies can and do die unexpectedly in their sleep, and as tragic as SIDS is to so many families, cats are not to blame.

Later, this myth evolved into cats being attracted to the smell of milk on the baby’s face and inadvertently smothering it.

Cats sometimes do harbour disease, but there are very few diseases of the cat that are zoonotic (transmissible from cat to human). It is still quite rare to pick up a disease from a cat, and your baby is far more likely to catch a disease from another human than a cat.

Before your baby is born, take your cat to the vet for a thorough check-up. Have the vet worm your cat and check him for ringworm. Ensure you stick to a regular worming and flea treatment regime. Keep your cat indoors and away from roaming cats is the most effective way to keep your cat disease and parasite free.

Caused by a protozoal parasite, Toxoplasma gondii, cats are the natural host; however, many animals can get toxoplasmosis including sheep, cattle, and pigs. Cats shed the parasitic cysts in their faeces and which then infect humans and other animals.

Toxoplasmosis usually causes only mild symptoms in healthy adults. If a woman becomes infected during her pregnancy, it can have devastating effects on the unborn fetus. Every pregnant woman who shares her home with a cat should request a blood test to look for antibodies to Toxoplasmosis. This test will determine if you have had past exposure to the parasite. A past infection means there is little to no risk of you passing toxoplasmosis onto your unborn baby. If you haven’t had prior exposure, it will be necessary for your partner to clean litter trays during your pregnancy.  It takes between 24-48 hours for the cysts to become infective — clean litter trays every day to eliminate the risk of infection.

Humans can also become infected by handling (and eating) raw or undercooked meat and vegetables. Thoroughly cook meat and wash your hands and utensils after contact with raw meat. Raw and undercooked meat post a bigger risk.

Caused by fungi, not a worm, ringworm is more a nuisance than a danger. Ringworm can be hard to get rid of, however, with stringent environmental cleanup, and the use of anti-fungal cream, it is possible to eliminate. If you have an indoor cat who has had the all-clear from your vet, there is little chance of you or your baby catching this. Ringworm is more common in kittens and cats living in overcrowded conditions.

Caused by the Bartonella henselae bacteria, cat scratch disease is rarely a problem in people with a healthy immune system. It occurs most often in immunocompromised people such as those with cancer or AIDS. Antibiotic treatment for you and your cat usually clears up this infection.

A bacterial infection due to bacteria of the Salmonella genus, most commonly acquired via oral ingestion. Cats are most likely to become infected after eating birds.

Parents must learn to filter what they need and discard the rest. Throughout pregnancy and early infancy, they will receive an overwhelming amount of advice.

People have shared their homes with cats for thousands of years, but it is important to remember that they can be unpredictable at times. Do not give your cat access to the same room a baby is sleeping without an adult present, and take precautions to ensure the cat doesn’t have access to the baby’s room because no parent can watch their child or their cat 24/7.

Take proper safety precautions with cats around babies and supervise both cat and baby when they are together. Hopefully, once the child grows older will form a long and lasting bond, just as my children have.

My children with cats 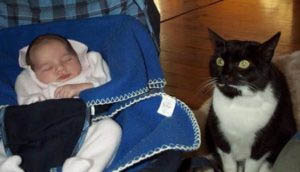 My newborn daughter with our cat, Eliot. Eliot died eight weeks after she was born.

My toddler and our Singapura, Levi. 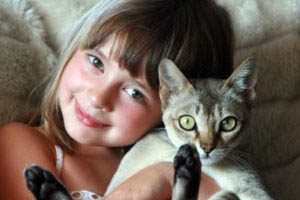 Growing up with our Singapura cat, Levi. Both children were infants when he came into their lives; he passed away in 2017.

My daughter and our newest cat, Calvin.

It is a long time since I created this article. My children are now in their teens, where does the time go? They have tremendous love and respect for animals and has been beautiful to watch them grow up with their pets. There have certainly been sad times when we’ve had to say goodbye to a cat, but they’ve also learned a great deal about animals and caring.